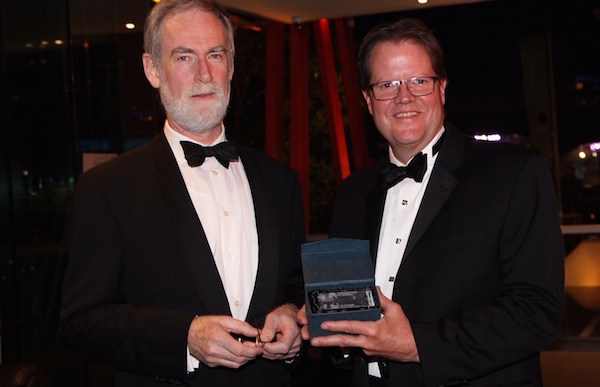 Marty Clubb, right, accepts the trophy for best New World Bordeaux blend from Huon Hooke, one of Australia’s top wine writers and a judge at the Six Nations Wine Challenge. (Photo courtesy of L’Ecole No. 41)

SYDNEY, Australia – For the second time in three years, a Walla Walla Valley wine is on top of the world.

On Thursday, it was announced that the L’Ecole No. 41 2013 Ferguson was awarded Best New World Bordeaux Blend at the prestigious Six Nations Wine Challenge, one of the most interesting wine competitions in the world.

Two years ago, the 2011 version of the Ferguson – a Cabernet Sauvignon-based blend from L’Ecole’s Ferguson vineyard in the southern Walla Walla Valley – won a Decanter World Wine Award for the world’s best Bordeaux blend of £15 or higher.

“Ferguson has taken the mark in a couple of spots,” L’Ecole owner Marty Clubb told Great Northwest Wine. “But honestly, we’re seeing fantastic quality fruit across the entire project. This site really has all the unique elements.”

We chatted with Clubb before he got on the plane to Australia for this week’s award ceremony.

Ferguson on top of the world – again 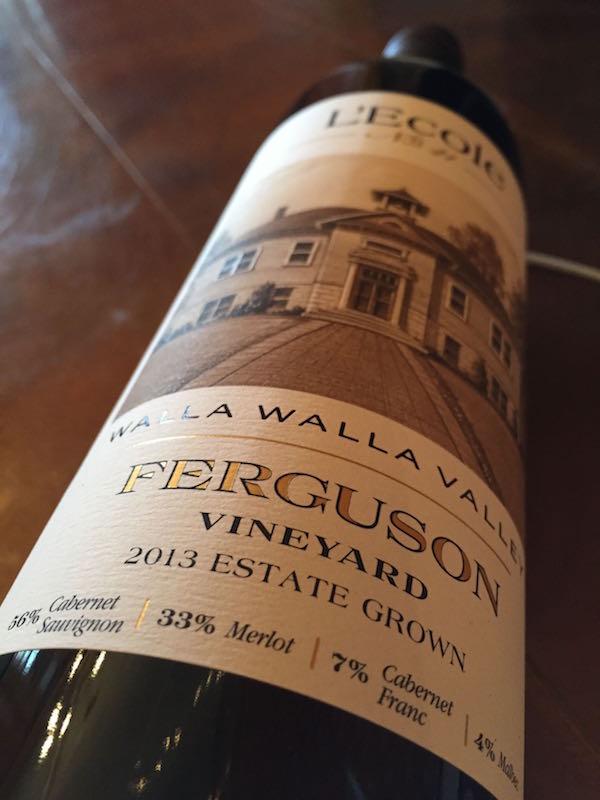 Ferguson, a Bordeaux-style blend from L’Ecole No. 41 in Lowden, Wash., has now won two international trophies – one in London and one in Sydney. (Photo by Andy Perdue/Great Northwest Wine)

That this blend is from a young vineyard in the southern Walla Walla Valley is remarkable. It was a big deal that Ferguson won the Decanter World Wine Award. But for it to follow up two vintages later at the Six Nations competition says a lot about Ferguson Vineyard.

Ferguson – named after Clubb’s in-laws, Baker and Jean Ferguson, who launched L’Ecole in 1983 – was planted in 2008 to Bordeaux varieties. Ferguson is part of SeVein, a vineyard development in the southern Walla Walla Valley in the hills above the town of Milton-Freewater, Ore.

The 2011 Ferguson was the first release of that wine, using grapes from vines that were just four years old. Then as now, the blend is 57 percent Cabernet Sauvignon, 33 percent Merlot, 7 percent Cabernet Franc, and 4 percent Malbec. The wine retails for $65.

The Ferguson site is 42 acres in size, though only 17.5 acres are planted at this time. The current vines – now six years old – produce about 50 tons of fruit per year, which is more than enough to accommodate the wine’s 1,100 cases of production.

“We added 12 acres this year, and we’re adding another 12 acres next year,” Clubb said. “When that’s all in production, it’s going to be a sizeable chunk of fruit for us. Plus our interest in Seven Hills Vineyard leaves me pretty strong on that hillside.”

As such, Clubb and his winemaking team use grapes from Ferguson to enhance other wines in the lineup, including L’Ecole’s Walla Walla Valley and Columbia Valley Cabs and Merlots.

The 2013 vintage might be a little bit difficult to find, primarily because of buzz that continues from the Decanter award remains.

“Decanter created a run on the wine and built a reputation,” he said. “That meant the next couple of vintages have moved pretty fast. It is in the marketplace if you go looking for it. We’re at the tail end at the winery. This Six Nations trophy will evaporate what we have left.”

Marty Clubb, owner of L’Ecole No. 41 in the Walla Walla Valley, stands in Ferguson, his estate vineyard in the southern end of the valley. (Photo by Andy Perdue/Great Northwest Wine)

So why does this vineyard seem to create a wine that is so special in the world’s greatest competitions? First of all, the two trophies show the wine is no fluke.

“We really wanted to focus on making one spectacular bottling from this vineyard,” Clubb said. “That appears to be working for us.”

Ferguson – and all of SeVein – is unusual. It’s a north-facing slope, which is unusual for great vineyards in the northern hemisphere, which tend to be south- and west-facing to take fuller advantage of afternoon sunshine.

It also has thin soils atop a fascinating base of basalt.

“We’ll see the soil warm up and bud break comes early,” Clubb noted. “But with the higher elevation, the vines slow down. This year, we started picking Seven Hills (which is down the hill from Ferguson) about 10 days or two weeks before we started picking at Ferguson.”

In addition, Ferguson tends to carry a lighter crop. So soil, air drainage and elevation all seem to play a factor in Ferguson in particular – and SeVein in general.

While the Decanter award took in New and Old World regions – in particular, Bordeaux and Napa Valley – the Six Nations has been exclusively focused on the New World, which still includes California, Australia and other competitive regions.

Here’s how the competition works: One judge from each of the six nations represents that country and selects 100 wines to represent several categories. For this year, the U.S. representative was Jon Bonné, former wine editor for the San Francisco Chronicle – and someone who worked in Seattle as a wine writer and is well-versed in Pacific Northwest wines.

“Jon told me he wanted to intentionally reach outside of California,” Clubb said. “For a lot of people, it will be a surprise that a Washington winery once again took another international trophy.”

But this is not the Northwest’s first big win at the Six Nations. 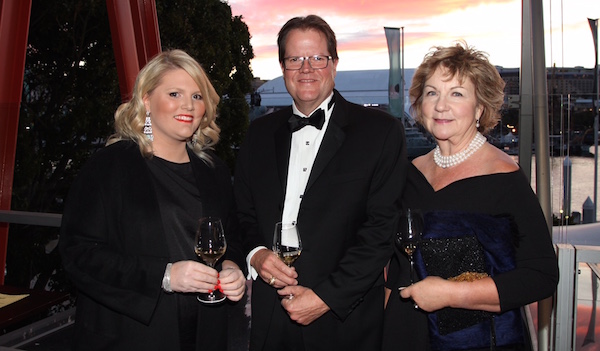 Marty Clubb, center, and his wife, Megan, right, stand with Amy Hodgson of Mount Pleasant in Australia, which won the trophy for best Sèmillon. (Photo courtesy of L’Ecole No. 41)

In addition to L’Ecole’s victory this week in Sydney, it was not the only Washington wine picking up a trophy.

In 2013, Maryhill Winery in Goldendale, Wash., won the trophy for red blends for its affordable 2011 Winemaker’s Red. It nearly repeated the feat in 2014, winning double gold and second place.

Also in the 2014 competition, Chateau Ste. Michelle won a double gold medal for its 2011 Canoe Ridge Estate Merlot from the Horse Heaven Hills of Washington. It also won gold medals for its 2012 Eroica Riesling and 2011 Indian Wells Cabernet Sauvignon.