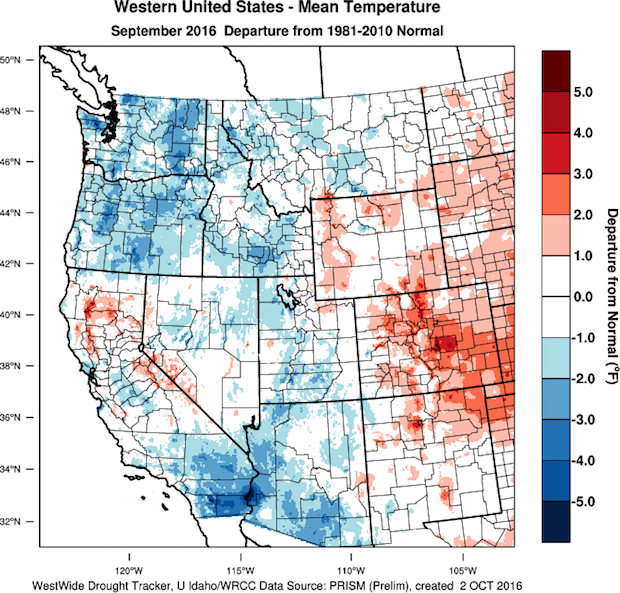 Growing degree-day (GDD) accumulation in September was near normal to slightly below normal in the Pacific Northwest. The region that saw the coolest conditions was in the Columbia and Walla Walla valleys of Washington and Oregon. (Images from WestWide Drought Tracker, Western Region Climate Center; University of Idaho)

There’s no arctic blast on the horizon for the next week or so, but the forecast is for more precipitation than normal as the 2016 vintage finishes cooler that last year’s record-breaker.

Climate researcher Greg Jones, a professor at Southern Oregon University in Ashland and one of the wine world’s leading scientists, shared a Climate Prediction Center notice that there’s a likelihood in the Pacific Northwest for a slightly wetter than average amount of rainfall for this week and the rest of October.

“Temperatures for this period are forecast to have a greater chance to being warmer than normal over all of the western half of the U.S,” Jones wrote.

“For the month,” he added, “precipitation is forecasted to be above normal in the PNW across the northern Rockies.”

The 2016 vintage will go down throughout most of the Pacific Northwest as 1-4 degrees Fahrenheit warmer than the 30-year average from 1981 to 2010. And precipitation through September has been 90 percent to 175 percent of normal throughout much of Southern Oregon and the Columbia Valley. Jones noted that Eastern Oregon and Idaho remain drier than normal.

However, this past month in the Pacific Northwest was dramatically different that much of the United States.

“September nationwide saw temperatures flip from a relatively cool pattern in the West to much above normal temperatures from the Rocky Mountain states over the whole of the eastern U.S.,” Jones wrote. “Temperatures throughout the east were 2-5°F above normal with the most astonishing record being New Orleans, where they recorded a record 43 days where the nighttime temperatures did not drop below 80°F.” 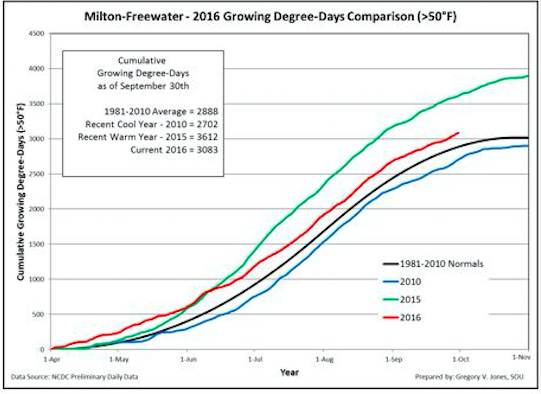 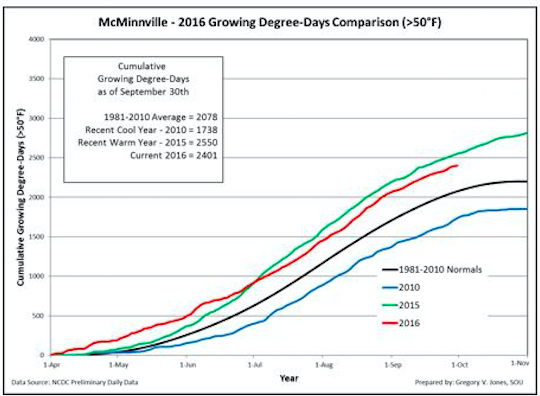 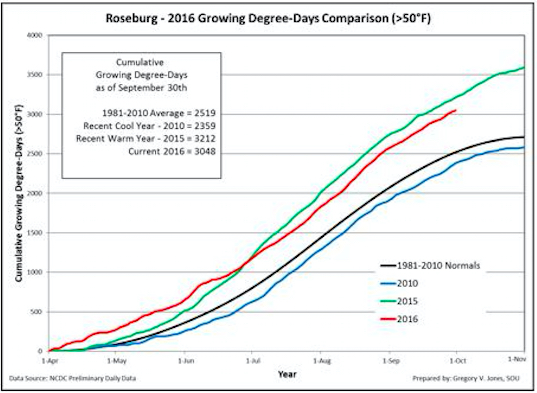 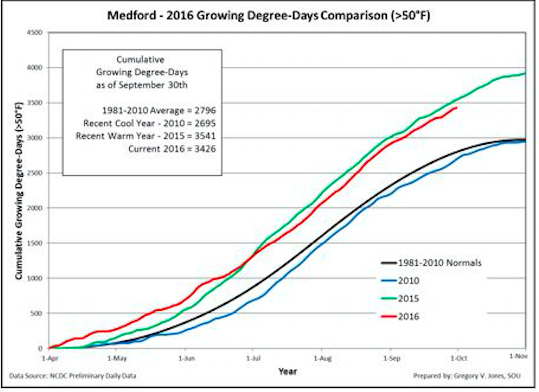 The 2015 vintage set records for growing degree days throughout the Pacific Northwest, but aside from Southern Oregon, the 2016 vintage won’t come close to those last year’s marks.

Washington State University’s AgWeatherNet charts growing degree days across the state as well as parts of Oregon. Through Sept. 30, there were 3,519 growing degrees days recorded at the Wahluke Slope station. A year ago, it charted 3,829 GDD.

Jones’ weather station in Milton-Freewater, which serves as a measurement of the Walla Walla Valley, recorded 3,083 GDD on Sept. 30. That’s well off last year’s 3,612.

In the heart of the Willamette Valley, Jones’ station checked in with 2,401 GDD. Last year at the same date, the McMinnville device stood at 2,550. The Roseburg weather station at Abacela notched 3,048 GDD, which was off the 2015 computation of 3,212.

In Medford, the Rogue Valley station remained just behind the 2015 vintage with 3,426 GDD compared with last year’s 3,541. 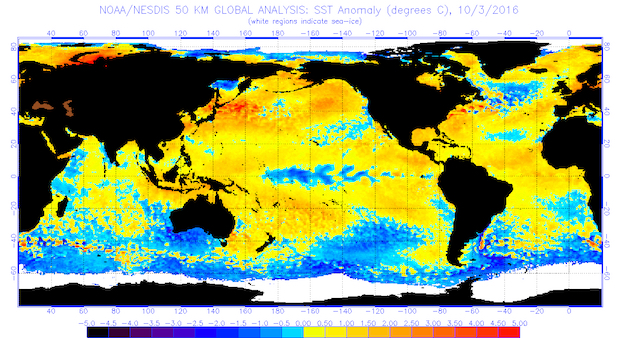 West Coast climate experts chart sea surface temperatures, particularly the North Pacific, for their long-range forecasts. In the early stages of 2016, many were predicting that El Niño would weaken and transition into La Niña.

This past summer, however, conditions have led many to alter those predictions.

“More and more observations and forecasts are pointing to La Nada this winter,” Jones wrote. “As mentioned here in the last few months, cooler tropical SST were favored and the development of a La Niña appeared likely for the winter. However, this transition has been slow and many are now calling for neutral (normal) to possibly weak La Niña conditions in tropical SST.

“La Niña conditions were pointing to wetter and cooler winter conditions in the Pacific Northwest, but with the shift to neutral conditions the winter forecast has one less factor that helps guide these predictions,” Jones continued. “Given these changes, forecasting agencies and individuals are calling for normal winter precipitation for the western U.S., especially from northern California into the PNW, with slightly warmer temperatures. However, conditions in the North Pacific will now likely play a more prominent role for our winter.”

Time will tell, but some changes on the other side of the Pacific Ocean could result in more snow for the Cascades. That would be welcomed news to irrigators, ski resorts and outdoors enthusiasts.

“Some warming in the North Pacific over the last month or so was met with numerous stories of the return of the BLOB in the media. However, while warmer than average sea surface temperatures (SST) in the North Pacific continue, there is some evidence that these conditions will slowly wane over the next 30-90 days,” Jones wrote. “The BLOB is associated with persistent high pressure over the eastern Pacific, and since high pressure produces weaker winds there is less stirring of cold water to the surface. As more troughing has been in place of late, the high pressure has given way to lower pressure and cooler surface waters.

“If this trend continues, this winter might trend to cool and wet, especially in terms of PNW snow amounts at higher elevations,” he added. “More next month as these signals become clearer.”