PORTLAND, Ore. — Nicolas Quillé grew up about 20 miles from Beaujolais, so the Pacific Northwest winemaker was dubious a decade ago when he heard about the Nouveau Beaujolais Celebration in Portland.

“At first I said, ‘No thanks,’ ” Quillé said. “In France on that day, it can be a pretty rowdy crowd where you’ll have people drinking too much and getting sick in the corner.”

After a bit of cajoling by members of the Federation of Alliances Françaises USA, however, Quillé decided to check out the annual event at downtown Portland’s venerable Heathman Hotel. Now, the event that takes up the mezzanine level and the tea court at the Heathman has become an event that Quillé puts down on his calendar every year. That’s why you’ll see Pacific Rim Winemakers at the 15th annual Nouveau Beaujolais Celebration on Friday, Nov. 18.

“It’s quite upscale, so I usually do not wear jeans at that event,” Quillé quipped.

This year’s is special because the culinary piece will be provided by Headwaters at the Heathman, the new seafood restaurant orchestrated by James Beard award-winning chef Vitaly Paley.

“Even though this is being held at a beautiful venue with wonderful food, Beaujolais Nouveau is a festive event that’s not for elites but instead a celebration of the people and the young wine,” said Linda Witt,  board member of Federation of Alliances Françaises USA and Vice-President of the French-American Chamber of Commerce of the Pacific Northwest.

It’s an exceedingly popular party, limited to 500 patrons, and an annual sellout dominated by return guests.

“We wouldn’t enlarge it,” Witt told Great Northwest Wine. “It would change the whole character, and the Heathman is a beautiful space to mill around in. I don’t see us moving it. The Heathman is a supremely important piece of the event.”

In 2007, Quillé moved his business headquarters for Vinmotion, which includes Pacific Rim, from the Tri-Cities to Portland. He’s been a regular at Witt’s Nouveau Beaujolais Celebration since 2008.

“They give me a good table, and the hotel is very nice,” Quillé said. “It’s grown to be quite an extravaganza and kind of an institution. It’s not insanely pricey ($75), and on top of that, you have the top chef in the city involved. Once you get in, everything is included — and you have plenty of Beaujolais to drink.”

However, Quillé makes a point of bringing wines out of Washington’s Columbia Valley – aromatic whites from Pacific Rim – that stand out at the Heathman.

“The Gewürztraminer and the sparkling Riesling – they are a huge hit,” Quillé said. “That’s definitely a place where the White Flowers can shine. People like bubbles.”

A road show for Nouveau Beaujolais 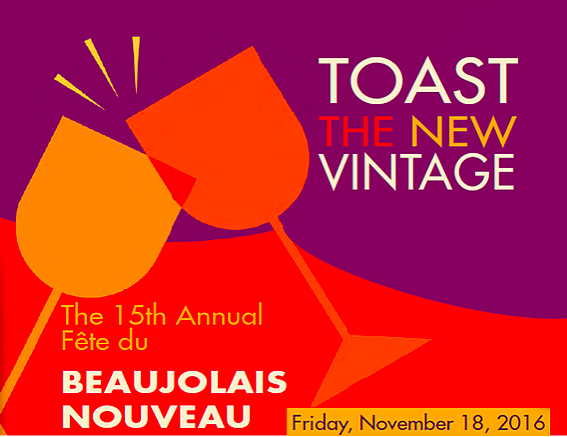 At 12:01 a.m. on the third Thursday of November, producers in the Beaujolais region of Burgundy begin taking to market huge amounts of Gamay, a variety related to Pinot Noir and made into an ebullient and approachable wine bottled within two months harvest.

Beaujolais Nouveau wines are built to drink in a fresh and fruity style, making them an ideal pairing for fowl or pork loin. They carry a vibrancy of youth, acidity and often a dab or two of residual sugar. Often they feature aromas of bubble gum and banana with flavors of fruit punch. They are viewed as a fun drink for young people and festive occasions, not necessarily a wine to be studied over a quiet dinner.

According to The Oxford Companion to Wine by Jancis Robinson, “… the essential point is that most Beaujolais is designed to be drunk rather than discussed or collected.”

Soon after the end of World War II, France established Nov. 15 as the official release day for Beaujolais Nouveau, but its rise in popularity can be traced back to Duboeuf, born in 1933 to a winemaking and farming family. He began to redefine the marketing of Beaujolais while a negoçiant in the 1960s, using the annual celebration to promote his trend-setting winemaking style.

Success of the flamboyant labels can be measured today by his company’s production — a staggering 25 million cases annually. The third Thursday of November became the official release date as of 1985. The French maintain that it became their country’s unofficial National Drinking Day during the Nixon Administration.

In the Pacific Northwest, Amity Vineyards founding winemaker Myron Redford is credited for supporting the Beaujolais Nouveau concept early on in Oregon. The Seattle native produced his first wine in the Willamette Valley — which he dubbed Pinot Noir Nouveau — in 1976. He didn’t begin growing Gamay Noir until 1987.

“I was born in Lyon, and those were the wines we drank all the time,” he said. “It’s one of my favorite wines.”

Alas, he was disappointed with the results of his own project and abandoned it after three vintages. He’s given a bit of thought to exploring Gamay in Oregon. At this point, if he’s going to add a SKU it would be Chardonnay. He already has Oregon Pinot Noir in the market under his young Rainstorm brand.

“I don’t know about the commercial potential of a Nouveau-style Gamay in the U.S.,” Quillé said. “You have to do it on some scale, and why in heaven would you do it you when you can buy the real stuff from France for $10?”

There’s a bit of Nouveau-style wine produced in Oregon, and Brandborg Vineyard and Winery in the Umpqua Valley has developed a traditional celebration at the award-winning winery in the Elkton Oregon American Viticultural Area.

“Yes, we harvested some estate Pinot Noir to use for our carbonic maceration wine, aka Elkton Villages Nouveau,” winemaker/co-owner Terry Brandborg said. “We will be hand-bottling about 35 cases in time for our annual Nouveau release dinner, the third Thursday of November.”

Brandborg and his wife, Sue, seize the historical date as an opportunity to celebrate Burgundy.

“We do a four- to five-course dinner for up to 50 in our barrel room featuring all of the different styles of Pinot Noir we make — white, rosé, red, nouveau and Port-style dessert,” he said. “The wine is made available for sale in the tasting room, obviously very limited, until we’re sold out. There’s a limit of three bottles per customer.”

In Seattle, the 24th annual Beaujolais Nouveau Festival will take place Friday, Nov. 18, on the 75th and 76th floors of the Columbia Tower.

The event is put on by the French-American Chamber of Commerce, Delta Airlines and the Columbia Tower Club. They will present wines by George Duboeuf and several top domestic food and beverage producers, including The Woodhouse Wine Estates in Woodinville.

About 500 attendees are expected to attend. Tickets for young professionals (ages 21-35) are $75 for members of the Columbia Tower Club and $90 for nonmembers. VIP ticket holders get in an hour early and receive other goodies. Cost for a VIP ticket is $150.

The French-American Chamber of Commerce has about 300 members in the Pacific Northwest.