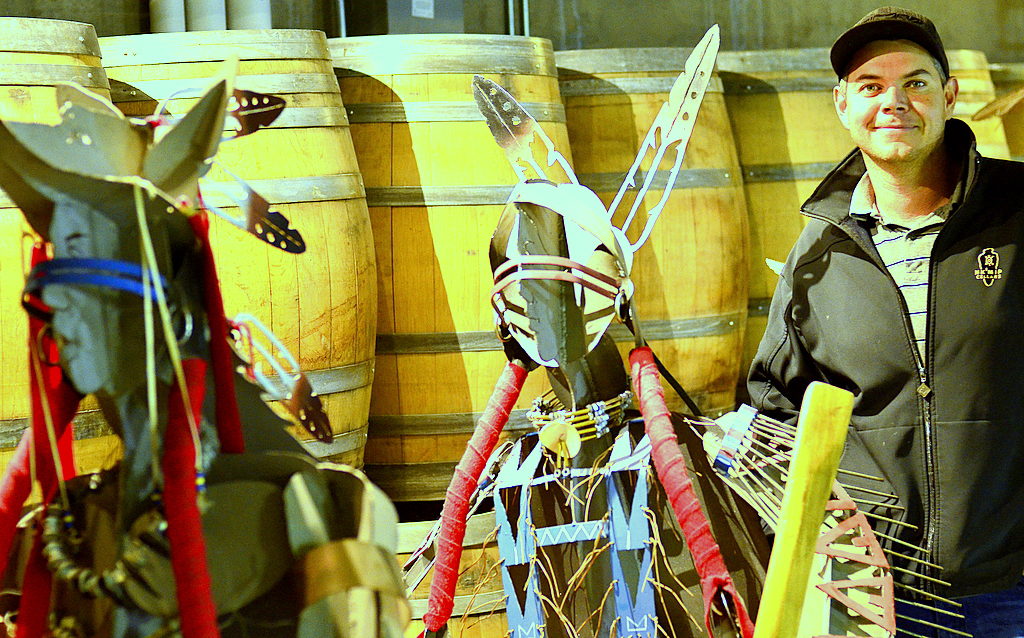 Justin Hall, a member of the Osoyoos Indian Band, is the assistant winemaker at Nk’Mip Cellars in Osoyoos, British Columbia. (Photo by Abra Bennett/Great Northwest Wine)

OSOYOOS, British Columbia – Nk’Mip Cellars may be the most unique winery you will ever have the pleasure to visit. It’s the first aboriginal-owned and-operated winery in North America, and a flagship property of the Osoyoos Indian Band — a member of the Okanagan Nation.

In the Okanagan language the word Nk’Mip, pronounced inn-kah-MEEP, means “bottomland,” and the winery is thus named because of its location at the southernmost end of what was originally the band’s winter hunting grounds.

Established by treaty in 1877 and overlooking the shores of the warm and tranquil Osoyoos Lake, the Osoyoos Indian Band Reserve sits on 32,000 acres of desert landscape in the hottest and driest part of Canada.

Home to sagebrush, cactus and burrowing owls, as well as lush, undulating acres of vineyards, it’s Canada’s only semi-arid, desert-like ecosystem. As a result, the hot and long summer days are followed by cool nights. That diurnal temperature variation, 13 inches of precipitation and often mild winters combine to create an environment for grapes that’s rather similar to Washington’s Columbia Valley and produces some world-class wines.

The band’s first vineyards were planted in 1968, making them among the oldest in the Okanagan Valley. Today, the band’s holdings include about 1,350 acres of vines. 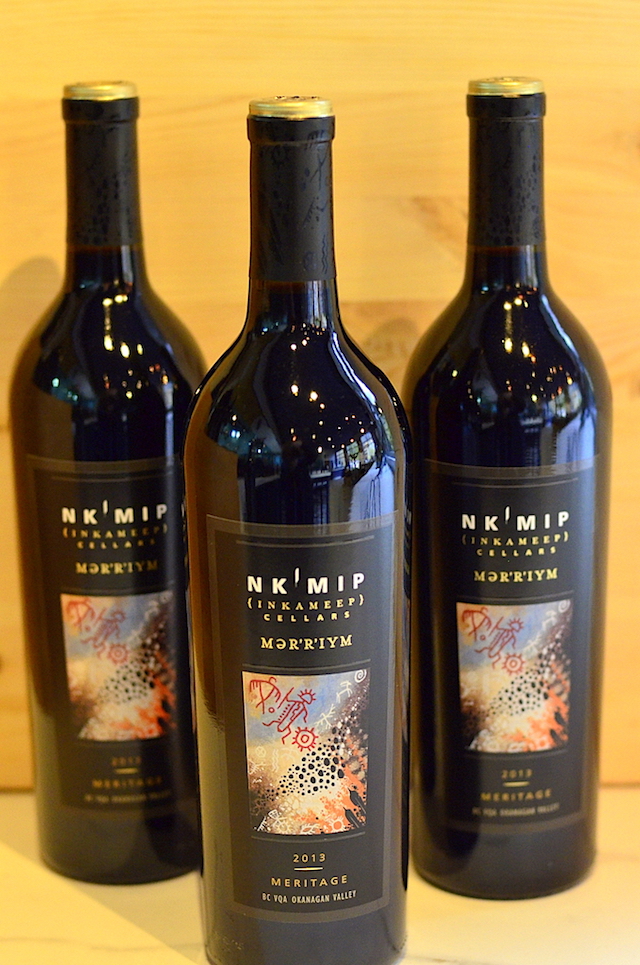 Justin Hall, a band member and assistant winemaker at Nk’Mip, points to a photo on the wall of the Nk’Mip tasting room.

“My family’s been in the grape industry for a long time,” Hall said. “My great aunt worked in the original vineyards, and lots of my family members worked in the bottling facility and the cellars at the old T.G. Bright winery, and also later when it became Jackson-Triggs. And even way back then, the band was selling grapes to wineries all up and down the valley.”

In 2002, Nk’Mip Cellars was formed in a partnership between the Osoyoos Indian Band and Vincor, at the time Canada’s leading domestic wine producer. The band retained ownership of 51 percent of the winery. In 2006, Vincor sold its 49 percent, together with the contract rights to 1,000 acres of vineyards leased from the band, to Constellation Brands, based in New York.

This fall, Constellation sold its entire Canadian wine business, including its interest in Nk’mip and the leased vineyards, to the Ontario Teacher’s Pension Plan for a reported $780 million.

“I don’t think the sale will make a difference to us,” Hall said. “We’ll just keep making the wines we want to make.” 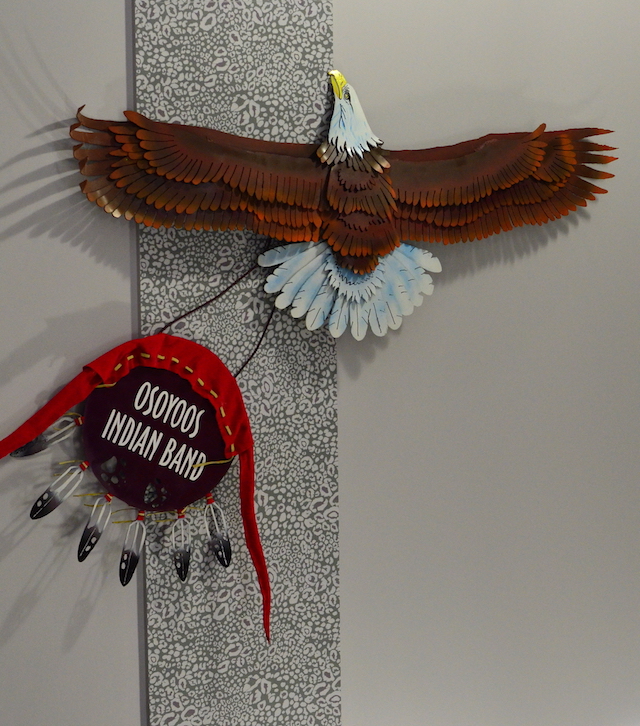 Artwork by the Osoyoos Indian Band is featured throughout the tasting room at Nk’Mip Cellars, a British Columbia winery in the Southern Okanagan Valley just north of Oroville, Wash. (Photo by Abra Bennett/Great Northwest Wine)

By every measure, the Osoyoos Indian Band and Nk’Mip Cellars are thriving. Yet prior to the election of Chief Clarence Louie in 1985, the band was wracked by poverty and unemployment not unlike other Indian bands and tribes in North America. When Louie became chief, he developed a hard-driving vision for the band’s economic development that remains today after more than 30 years in office. Fortunately for wine drinkers, this push extends to the cultivation of grapes and the making of wine.

In 2014, the Toronto Globe and Mail news organization referred to the band as “arguably the most prosperous First Nation in Canada, with virtually no unemployment among the band’s 520 members.”

That achievement has been realized in large part to the success of Nk’Mip Cellars, although the band does have more than a dozen successful business enterprises.

As many winemakers freely admit, Nk’Mip, like most of the wine industry in the Okanagan Valley, owes a good part of its success to an enlightened government policy. Originally, the grapes planted in the band’s vineyards were hybrid varieties that went into the production of bulk wines.

But starting in 1988, the Canadian government encouraged growers to uproot the native and hybrid vines and to replant vineyards with higher quality varieties of European wine grapes. Chief Louie and vineyard manager Sam Baptiste, who had himself been the band’s chief from 1977 to 1985, heard opportunity knocking. And so in 1991 came what Hall calls “the great replanting” of the band’s vineyards. The vines weren’t all ripped out.

Today, all of the grapes that go into the annual 18,000-case production at Nk’Mip are grown on land owned by the band. These include Pinot Noir, Cabernet Sauvignon, Cabernet Franc, Syrah, Malbec, Merlot, Sauvignon Blanc, Pinot Blanc and Chardonnay. 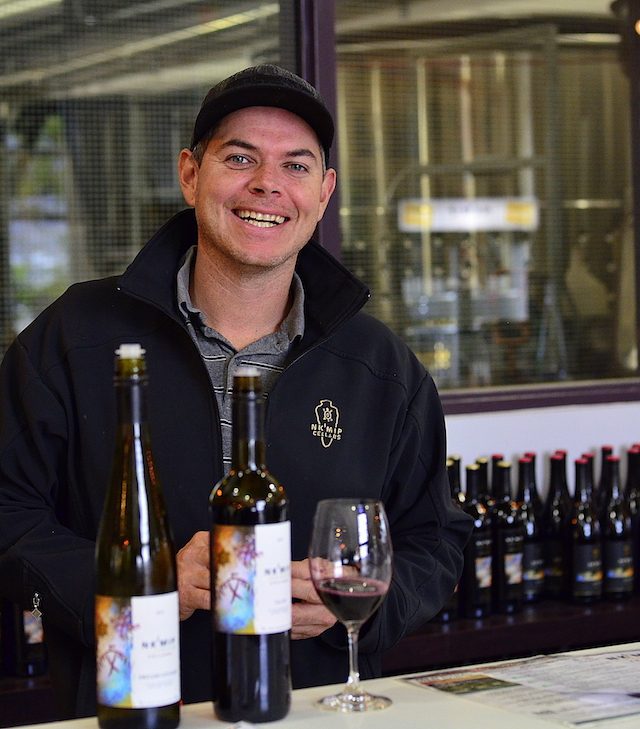 Justin Hall, a member of the Osoyoos Indian Band, is the assistant winemaker at Nk’Mip Cellars in Osoyoos, British Columbia. The Okanagan Valley winery is less than a 10-minute drive from Oroville, Wash. (Photo by Abra Bennett/Great Northwest Wine)

Success at Nk’mip’ can also be attributed to the steady leadership of head winemaker Randy Picton, at the helm since 2002, and to the stability of his staff.

“The team’s been together for such a long time that basically we can read each other’s minds,” Hall quips.

Hall’s own story demonstrates the commitment of Chief Louie and Picton to helping band members advance to their highest potential. Hall came to Nk’Mip in 2004 at age 22, describing himself as just a kid looking for winter work during the off-time from his regular job cutting grass on the golf course.

“Within a week at the winery, I got the food-and-wine bug, it’s like a magic thing,” he says with a smile.

So the band sent him to Okanagan College in Penticton for two years of training in viticulture and enology. After completing that program and working for an additional five years in the Nk’Mip cellar, the band again sought to further his advancement and sent him to New Zealand’s Lincoln University for 10 months of advanced studies.

He returned to Nk’Mip as the assistant winemaker, and he hopes to take over as head winemaker when Picton retires. 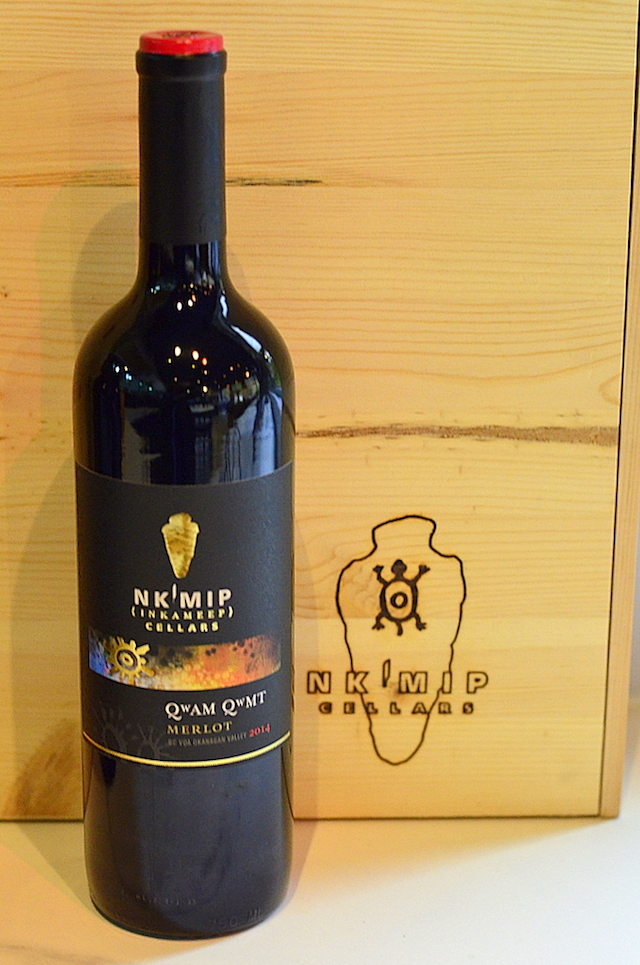 Under Picton’s highly regarded leadership, the Nk’Mip wines are thoughtfully made, terroir-driven and style-conscious.

“I’m not going to say that our wines are dead serious, but they’re mostly dry in style,” Hall said. “We’re not making any wimpy wines, although we do make our Winemaker Series in a lighter, softer style for drinking right now. But we don’t want to make Coca-Cola. We’re not making the same product year after year. We want our wines to be indicative of the growing conditions each year.”

The Qwam Qwmt wines are produced in limited quantities and are made from the finest grapes grown in the band’s vineyards. As Hall sees it, the excellence that all of Nk’Mip’s wines achieve is the result of unrelenting effort.

“Let’s say that it’s a Sunday and you’ve already worked a 12 -our day for the past 15 days, and you want to go home, and you know you could half-ass that last five-minute job,” Hall said. “But really, the fact that we always do it correctly is why I’m so proud of our wines. Knowing that you do it right every single time, that it’s never a half-assed job, I think that’s so important to our making excellent wine here.”

In addition to Nk’Mip’s state-of-the-art facility, Picton’s team regularly stages internal competitions among its wines and top wines from all over the world.

“When we do want to build a new wine, we’ll put it in a blind tasting and we’ll bring in similar wines at higher price points, generally $50-100 wines, and see how we do,” Hall said. “I think that’s another reason why our wines are so strong, because we’re always competing against well-renowned products.

Hall said the pride in Nk’Mip Cellars extends beyond the production facility.