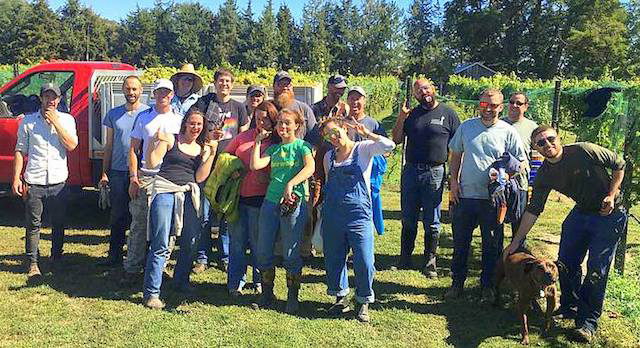 WALLA WALLA, Wash. — Grapes in the Muscat family were cultivated by the ancient Greeks and Romans, but many wine lovers haven’t experienced Muscat Ottonel. College Cellars of Walla Walla is working to change that.

It’s a relatively new variety by comparison, developed in France’s Loire Valley in 1852 by crossing a local Muscat with Chasselas. It’s a variety that’s not considered to be a “noble” Muscat, but for College Cellars, it’s as good as gold.

In 2008, Greg Schnorr, pastry chef instructor at Walla Walla Community College, established Red Boar Vineyard on land along the south bank of Mill Creek in Walla Walla County. The 1-acre vineyard is planted entirely in Muscat Ottonel because it’s extremely cold-tolerant and it ripens fairly early. The vineyard has been farmed organically from the beginning, fertilized naturally by the heritage hogs, ducks and geese that wander among the vines.

Although that sounds idyllic, a quick and deep freeze in November 2014 damaged a large number of Schnorr’s vines. While the surviving vines came to life in 2015, the combination of powdery mildew and bird damage wiped out the entire vintage for Red Boar.

Starting in the winter of 2016, Deborah Foley, a second-year WWCC enology and viticulture student, used part of her viticulture practicum to work on restoring Red Boar Vineyard. Both the quality and the quantity of the fruit greatly improved under her care, said Tim Donahue, the school’s director of winemaking.

“The grapes were really in good shape this year, because Deb Foley was out there cracking the whip, making sure that the grapes were being taken care of,” Donahue said. “And the yield was double what it has been in the past.”

“I think the biggest challenge I observed for a small-scale organic vineyard is the labor required for weed control and canopy management,” Foley said. “Hand removal of weeds is very labor-intensive.” 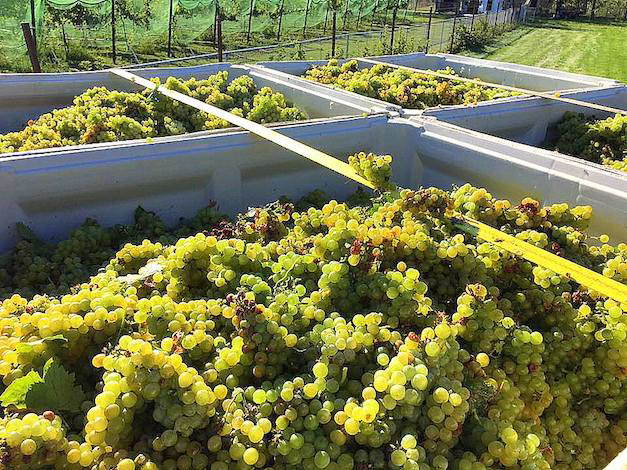 The Muscat Ottonel project began at College Cellars in 2012, when Schnorr approached Donahue about buying his grapes. Donahue jumped at the opportunity to buy them, seeing an opportunity to teach his winemaking students a few business lessons.

“If you look at the economics of Cabernet or Merlot production, all the big reds that Walla Walla is so famous for, if you want to get in that game you’d better make sure that you have a very deep wallet,” Donahue said. “You’re going to be paying $2,000-$4,000 per ton for fruit. You have to buy $1,500 barrels. You’re going to have to age it for two to three years. So here you are sitting on your wine for years before it’s finished. And then you hope you can sell it, you hope the market’s still there for it.”

Since Muscat Ottonel isn’t exactly a household grape, and many wine drinkers turn up their noses at what’s all too often a sickly sweet quaff, it too might be considered a marketing risk.

“I’m kind of miffed about the Moscato phenomenon that ravaged the nation a few years ago, because some really sweet versions have given Muscat a bad name,” Donahue said. “A lot of it was just plonk that really wrecked the ‘cool factor.’ I’ve always loved Muscat for its beautiful, bright, floral, aromatic qualities, and I’ve been making it in one variety or another throughout my whole career. My wife loves it, my mother-in-law loves it, and that’s really important to me.” 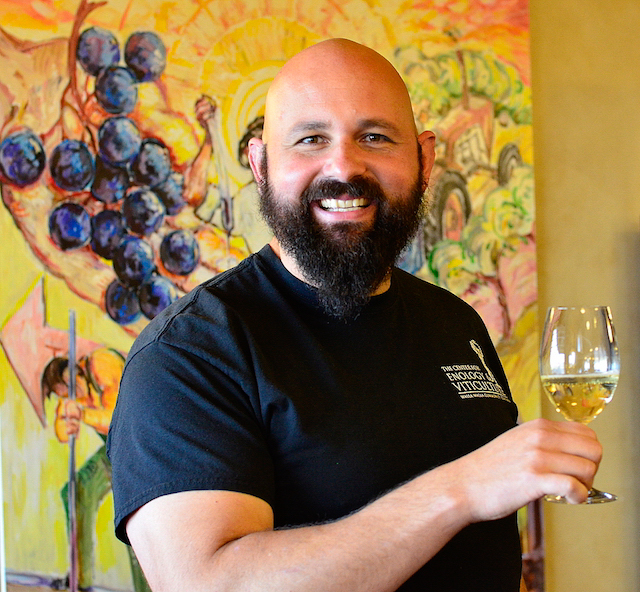 Tim Donahue is the director of winemaking at College Cellars of Walla Walla. (Photo by Abra Bennett/Great Northwest Wine)

From the beginning, what Donahue hoped to accomplish with his Muscat Ottonel program was to make a wine that was at the extreme end of the production spectrum.

His idea was to produce a wine entirely on margin, to be able to make and sell the wine within 30 days from crush to bottle.

“Greg Schnorr gives us 60 days from the day we pick the fruit to the day we have to pay for it,” Donahue explains. “This year, the students picked and processed the grapes on Sept. 13. Normally, on about the 22nd day after we pick, I have the bottles, the labels and the crown seal caps delivered, and we have 30 days to pay for them. All of this is a little bit scary because you’ve got to be sure that that the timing is just right.”

Typically, on the 23rd day, College Cellars bottles the wine. On Day 24, they start selling it.

This year, the timeline was a little shorter, with the award-winning wine being produced in just 20 days from crush to bottle. Donahue considers that to be the absolute limit to how quickly the process can be managed. 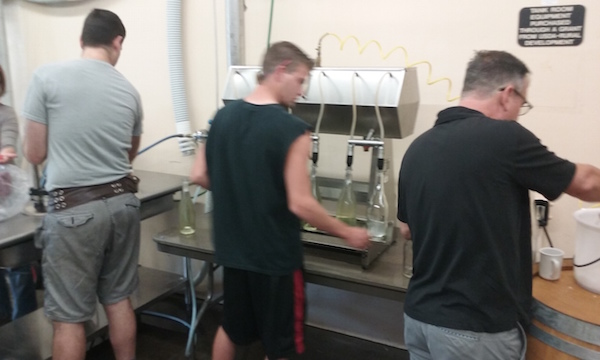 Students in the winemaking program Walla Walla Community College pull a shift on the bottling line at College Cellars before class starts as they cap the College Cellars 2015 Inland Desert Nursery Vineyard Muscat from the Yakima Valley. (Photo courtesy of College Cellars)

To make the Muscat Ottonel, everything is done with an eye on rapid turnaround and efficiency.

After the grapes are pressed, the juice is divided. One third of the juice, once it’s been enzymatically settled, is refrigerated for later blending back into the filtered wine as a “juice reserve” just before bottling. That’s common practice in Germany.

The remaining two thirds gets fermented directly on bentonite to create a clear, protein-stable wine straight out of fermentation, and is then is made into a dry still wine. The rapid fermentation and blending the juice back into the wine, says Donahue, “gives you a nice grapey-ness, and adds another dimension to the wine. And we try to keep all the natural effervescence in the wine so it’s got a little spritz to it but is still a little bit under the sparkling wine threshold. Then we bottle it under crown seal. It’s technically a still wine, but it’s got a slight natural fizz to it.”

This year, the bottling took place Oct. 3 with EV students operating the bottling line. Donahue remembers the excitement of that day.

“When you’re making a wine that’s only 9% alcohol, with quite a lot of residual sugar, the bottling has to be absolutely sterile, and we’re having it bottled by brand new students on a hand bottling line, while surrounded by fermenting red wines with all their yeasts absolutely everywhere,” Donahue said. “Talk about terrifying!” 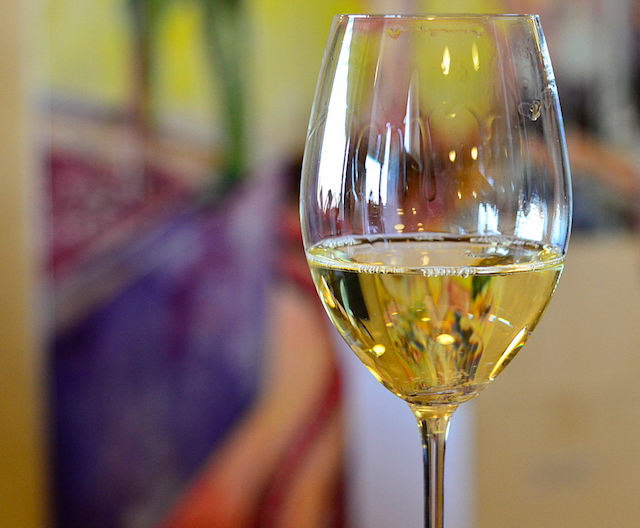 Because this wine was conceived to serve as an economic lesson for the EV students, naturally a marketing strategy is part of the package. Once the wine is in bottle. it’s almost always released on a Friday — the first Friday after school starts.

“I’ve discovered that teachers really need something after the first week of school and a little Muscat seems to hit that demographic perfectly,” Donahue said.

“The economic reality of this wine is that in the first month of sales we cover all the costs of production and pay off all of our suppliers,” he continued. “So we are able to make the wine without taking one penny out of our pockets.”

“That wine becomes the vehicle that allows us to buy barrels and expensive fruit, it provides cash flow to keep our winery functioning,” he said. “It single-handedly paid for the 40 new barrels we bought this year. Of course, those aren’t all expensive French oak, but we do buy good barrels.”

This year, College Cellars bottled 200 cases of Muscat Ottonel, a light and refreshing wine at just 9% alcohol, and affordable at $15 a bottle. The remainder of the wine will go into their Scholarship White blend. The WWCC culinary program also keeps some of the juice for making sorbet, and has offered Muscat and sorbet pairings. 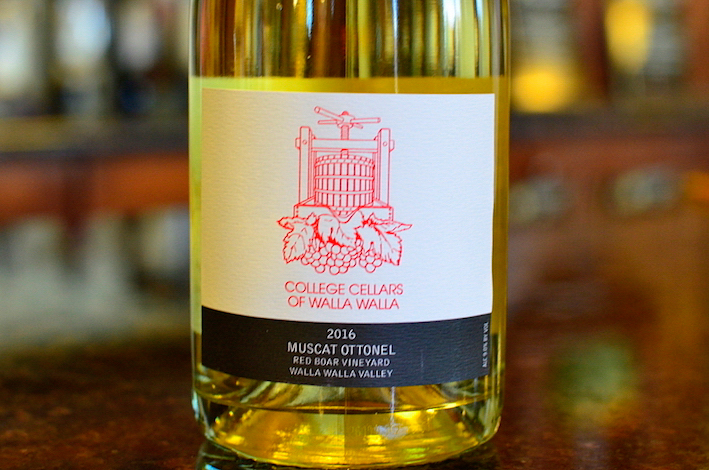 “All the wine you make should be damn good, no matter whether its goal was to be an economics lesson or not,” Donahue said. “Just because you’re trying to do something fast doesn’t mean you can’t do it well. Ours is a really pretty wine, and I think we’ve harnessed something that’s all about the fruit.”

Earlier this year, the 2015 vintage of Muscat by College Cellars — a blend of Orange Muscat and Muscat Ottonel from Inland Desert Nursery near Red Mountain — earned best of class at the Cascadia Wine Competition.

And the 2016 already is bringing home the gold.

Last weekend, the Tri-Cities Wine Festival rewarded College Cellars’ speedy finesse with a unanimous double gold medal and best of class. The panel included Sheri Morano, a Master of Wine from the East Coast. Indeed, the 2016 vintage of Red Boar Vineyard Muscat Ottonel is off to a sweet, slightly spritzy start.

In less than two months, we’ll see what happens with this young Muscat Ottonel at the 2017 San Francisco Chronicle Wine Competition in Sonoma.