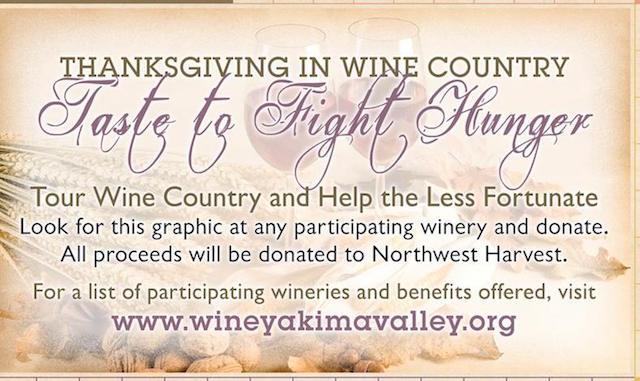 Wine tourists who visit participating wineries in and around the Yakima Valley will see posters for Thanksgiving in Wine Country Taste to Fight Hunger, encouraging patrons to support food banks in the Columbia Valley.

YAKIMA, Wash. — Thanksgiving Day gave way to Black Friday, and while Pacific Northwest winemakers are encouraging consumers to visit them on Small Business Saturday, wineries in the Yakima Valley region hope their supporters will help fight hunger this weekend.

Wine Yakima Valley, the marketing arm for member wineries in the cradle of the Washington wine industry, is partnering with Northwest Harvest during Thanksgiving in Wine Country. Wine lovers who visit participating wineries in the Yakima Valley and the Tri-Cities are encouraged to bring nonperishable food items to the tasting rooms or make a cash donation to the Thanksgiving in Wine Country Taste to Fight Hunger box.

Donation incentives offered at Wine Yakima Valley tasting rooms range from a free tasting flight to discounts on wine sales and having a winemaker sign your bottles. A number of wineries also will be donating their tasting fees directly to Northwest Harvest.

Northwest Harvest, a nonprofit food bank distributor that operates statewide, delivered 17,000 tons of food in 2015 to more than 350 food banks, meal programs and schools throughout Washington. That effort provided more than 2 million meals each month.

Last year’s Thanksgiving in Wine Country Taste to Fight Hunger effort provided more than 5,000 meals to families in need throughout the Columbia Valley. And 2017 will mark the 50th anniversary of Northwest Harvest, which is set up to send more than 90 cents of every dollar received to its programs. Northwest Harvest can provide a complete meal for 22 cents. 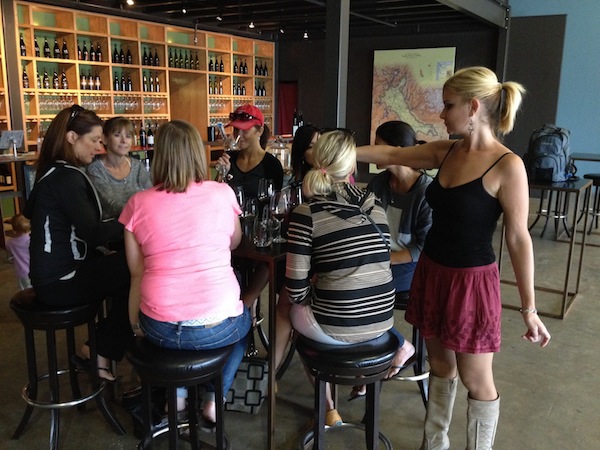 Thanksgiving Weekend has become one of the most important celebrations throughout the Idaho wine industry, and Cinder Wines in the Snake River Valley joins in the spirit of giving by raffling off a double magnum of reserve Tempranillo each day to raise money for the Ada County Boys and Girls Club.

The winery in Garden City owned and operated by winemaker Melanie Krause and her husband, Joe Schnerr, raised $1,000 with the first raffle on Black Friday.

In Oregon’s Willamette Valley, many wineries will participate in their annual Wine Country Thanksgiving.

Among the interesting features this weekend is that pioneering The Eyrie Vineyards looks to make more history with what Jason Lett is billing as the Willamette Valley’s first release of Trousseau Noir, aka Bastardo, a grape native to the Jura region in France.