LOWDEN, Wash. — Every so often parents get what they want from their kids without even having to ask. Rick Small and Darcey Fugman-Small of acclaimed Woodward Canyon Winery in the Walla Walla Valley are among those lucky few.

Both of their children, Sager and Jordan, after being away from the family’s famous business for about a decade, have come home to the nest.

Sager Small, 29, recently returned to Walla Walla after nearly 10 years spent in some of the best kitchens in Seattle. He gave up the cook’s life to become a student in the Walla Walla Community College enology and viticulture program.

One might think that having grown up in a winery he would just bypass the formal education step. Small dismisses that notion with a chuckle.

“I wouldn’t recommend that other students be in awe of me, or copy off me in class,” Small said. “There are still so many things that I’m just learning from the beginning. I’ve never even worked a crush in my life.”

Still, he’s always had something special, according to his mother.

“Since he was little Sager has always marched to his own drummer,” Fugman-Small said. “But certainly some of the things he was exposed to in the winery helped to shape him. When he was small, he would open my kitchen cupboards and stand there and smell the spices. And if we were in a shop that had scented oils, I could never drag him away. He was always very in tune with his senses as a little kid.”

Those qualities, however, didn’t lead him to work in the winery at an early age. His parents laugh as they recall him being more interested in his Game Boy than in winery operations. 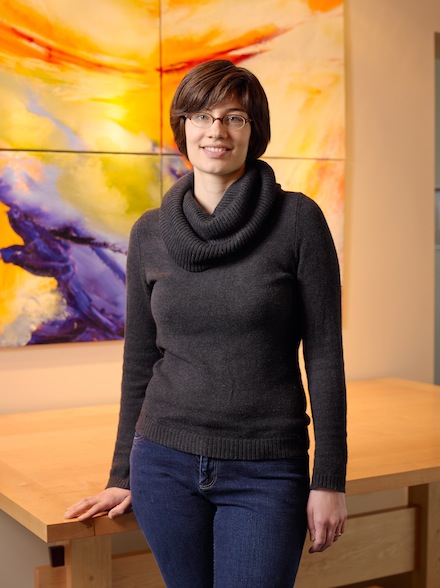 Jordan Dunn Small, who has been a minority partner in Woodward Canyon Winery since 2011, handles the wine club, office administration and production support. (Photo courtesy of Woodward Canyon).

On the other hand, according to Fugman-Small, their daughter Jordan Dunn-Small, was always into wine.

Jordan is the eldest child by 3½ years, and as a teen-ager, she helped with dirty glasses at all the events. She’s almost always been part of the winery in some way. As an adult, she has worked for the Walla Walla Valley Wine Alliance, Tertulia Cellars and spent five years at Long Shadows Vintners working in their lab.

She’s on maternity leave, but Dunn-Small works at Woodward Canyon full time administering the wine club and staffing the office, as well as overseeing labeling and packaging.

A decade in Seattle kitchens for Sager 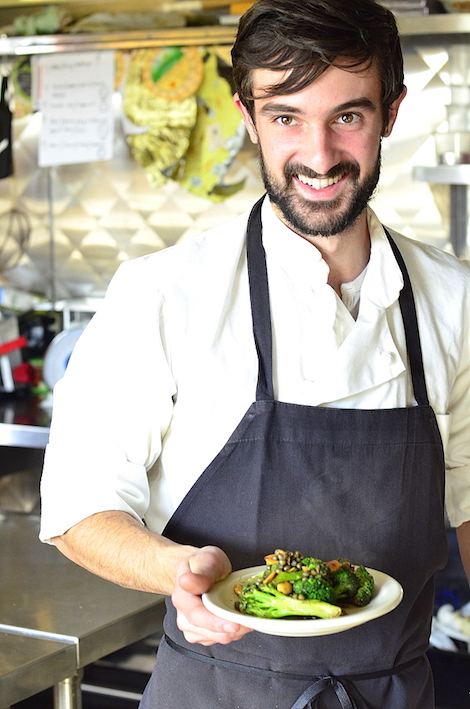 Sager followed a different path. After graduating from Walla Walla High School, he moved to Seattle to attend the Art Institute of Seattle’s culinary arts program. He had the good fortune to intern at one of Seattle’s iconic restaurants, chef Thierry Rautureau’s Rover’s. He then helped open Luc for the well-known “Chef in the Hat,” and also worked extensively at Café Presse, with shorter stints at Le Pichet and Tulio.

While at Tulio, the restaurant at Kimpton Hotel Vintage Seattle, he learned the art of wood-fired oven pizzas, a skill he brought with him to Woodward Canyon, where he produces pizza for visitors.

When he wasn’t laboring in the kitchen, he played in a Seattle band called the Comettes, and traveled in Europe whenever he could. There, he developed a taste for Mediterranean food, which won him over after nearly a decade of French cooking.

“But I always had the concept that I would be coming back to the winery and try to contribute, to be useful in some capacity,” Sager says. “Although I’m still really passionate about cooking. My food is very sincere.” 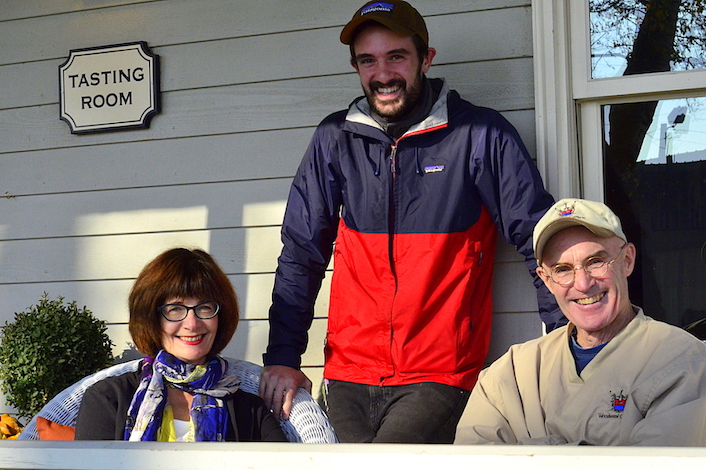 Anticipating these contributions, Rick Small confesses that the family is already into succession planning, although without specific dates in mind.

“When Sager decided to go to school to study wine, I knew he’d be a perfect student because after nearly a decade in kitchens he already understood balance, and subtlety and nuance,” Small said. “So now the plan is for Sager and Jordan to take over the business eventually, Jordan on the business side and Sager on the production side. And the kids have been on our board of directors since 2010.”

The extent of family involvement goes beyond. Sager’s girlfriend, Selena Kritsonis, works at the winery in sales and shipping and manages the company’s website. Jordan’s husband, Marshall Dunn-Small, operates a mobile bottling truck for Signature Bottlers.

Sager Small hasn’t settled on a favorite aspect of production.

“I like the viticulture because you get to be outside and work with your hands,” he said. “You’re kind of back to the earth, which is a real contrast to the dark, windowless kitchens I’ve worked in for the last 10 years.

“But I also like the winemaking part, because it’s a lot like the food side of things,” he continued. “I’m a sensory guy. I’ve been critically thinking about flavors, and critically training my palate, the whole time I’ve been cooking, and those are things I think can roll over into winemaking.”

For now, he feels no pressure to come down on one side. His parents, as usual, are encouraging him to find his own way. 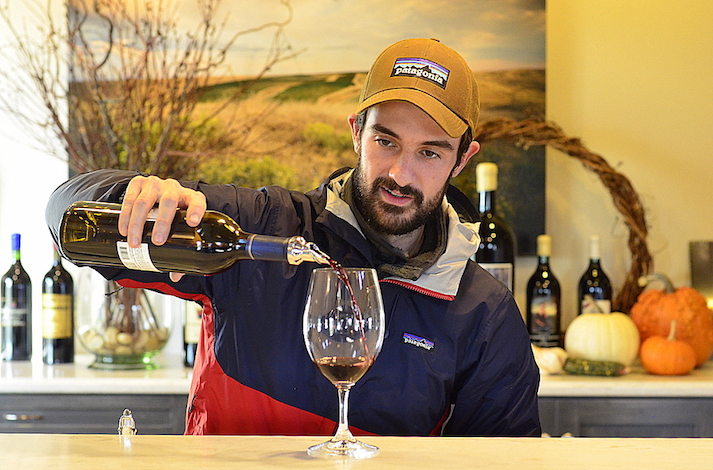 At this point in his life and career, Sager said his role as a student suits him.

“I’m really liking school,” he said. “I like just nerding out about things. And even classes that don’t sound that entertaining initially, like soil science and irrigation principles, it turns out that I really get engaged and have fun with them. Tim Donahue and Sabrina Lueck and Joel Perez are great teachers for me because they’re really excited about what they teach and very knowledgeable about the subject.”

When he’s not in school, Sager can be found in Woodward Canyon’s organic garden or in its kitchen. From the pizzas to the seven-course winemaker dinners he prepares by himself, Sager welcomes visitors to Woodward Canyon with his cooking, using as much produce as possible from the organic garden he tends. And, true to his roots, he also plays guitar in a Walla Walla start-up band.

Does he find it a daunting prospect, taking over such an acclaimed winery, with recent accolades that include 2014 Washington Winery of the Year from Wine Press Northwest magazine, and the top wine in last year’s The Seattle Times’ annual list of the 50 best regional wines?

“Well, on the board of directors I’m mostly just eyes and ears open,” Sager said. “I’m just trying to learn and get caught up so that I can be useful. I want to give back to the company, but in what capacity I’m just not sure yet.”

Family ties sorting themselves out

Sager Small and his parents – Darcey Fugman-Small and Rick Small – continue to prepare for a transition in day-to-day operations at Woodward Canyon Winery in Lowden, Wash. (Photo by Abra Bennett/Great Northwest Wine)

There’s no reason to envision any sort of issues with the succession.

“I’m lucky enough that I get along with my sister very well, and we have very few problems,” Sager said. “We kind of balance each other out, and we have a good dynamic, so I think we’ll do well together.

“The transition definitely won’t happen until after I finish school,” he adds. “It’s the consensus of the family that I should study, maybe learn newer things that have come up in winemaking since 1981, when Woodward Canyon was founded.”

And he’ll be in an ideal position alongside longtime winemaker Kevin Mott.

“I’m learning different ways to do things in school than some of the things we do here, but to me, a different way has never been a wrong way,” Sager said. “Just like in the kitchen, there are a lot of different ways to get things done. And I have a lot to learn before I’d even think about making any changes here.”

In a family-run enterprise succession is always a worry. Will the kids want to take over the family business? But Rick Small and Darcey Fugman-Small need not have worried.

“My parents never pressured us to do anything at the winery,” Sager said. “They always kept the door open, but they didn’t try to push us through. And my sister and I both ended up coming back, for different reasons and by different paths, but we’re back.”

Woodward Canyon produces 15,000 cases of wine annually, from 41 acres of estate fruit, as well as fruit from Champoux, Sagemoor, Summit View and Celilo vineyards. The multi-generation farming family also is a founding member of the Walla Walla Valley Wine Alliance and of Walla Walla Valley Vinea — the Winegrower’s Sustainable Trust.