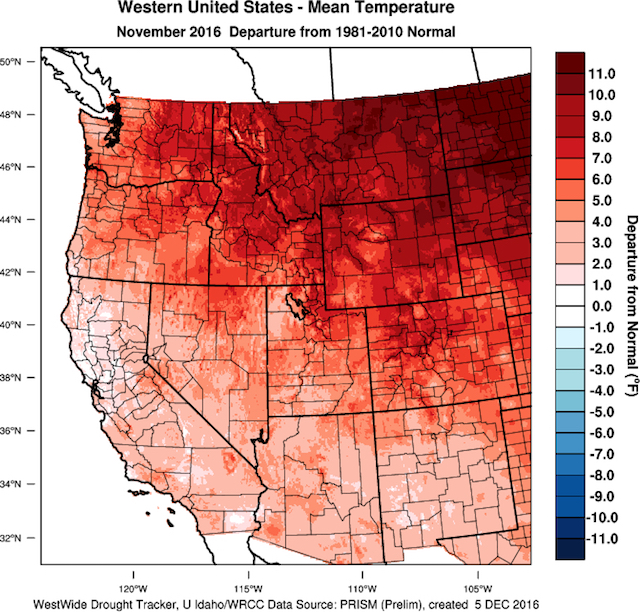 ASHLAND, Ore. — Climate expert Greg Jones points out that after 11 months, the year of 2016 is headed to finish out warmer and wetter than the recent 30-year average.

“Well, after an October that felt more like November, we just finished a November that felt more like October!” the Southern Oregon University professfor wrote in his latest climate update and forecast for the Pacific Northwest wine industry. “Temperatures during the month of November were warmer than normal across the west ranging from 0.5-1.0° F in portions of California to nearly 12°F above normal in the northern Rockies.”

However, those temperature readings come with an interesting twist, particularly for growers and winemakers waiting to harvest ice wine, which requires temperatures to plunge to 17 degrees Fahrenheit or minus-9 Celsius in British Columbia.

“All-time records were set for the month of November in many locations in Oregon, Washington, Idaho, Utah, Wyoming, Montana and Colorado,” Jones wrote. “The records were generated not from record daytime temperatures, which were close to normal, but from record nighttime temperatures. As a result, agricultural areas over the majority of the West did not see a frost during the month and many have not seen a frost yet this fall.”

As a result, preliminary data is pointing to November 2016 being the warmest November on record for the U.S. Diminished precipitation spans much of the country, particularly the Mid-Atlantic and Southeast, exemplified by the historic wildfires raging in Tennessee.

“During the month, most of the cold air from the Arctic was shifted toward Siberia with up to 40-60 degrees below normal conditions for nearly the entire month,” Jones noted. 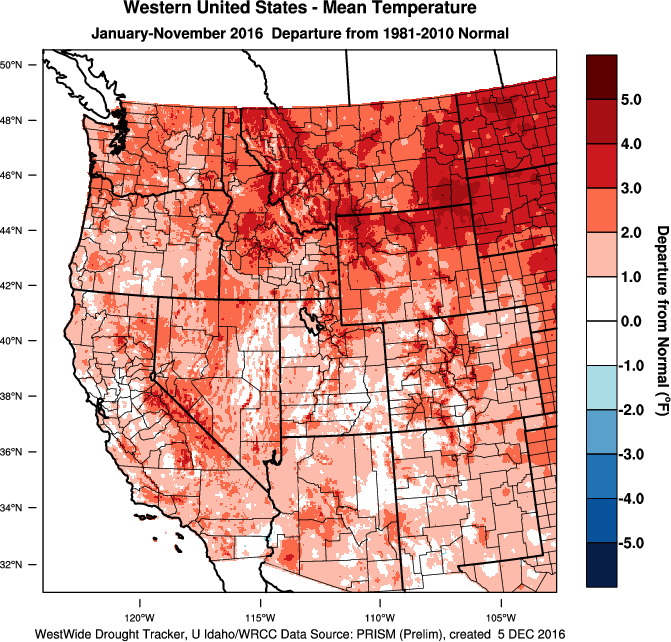 Most of the western United States is tracking warmer than normal for 2016. (Image by WestWide Drought Tracker, Western Region Climate Center; University of Idaho/Courtesy of Gregory Jones, Southern Oregon University)

While the northern Rockies and Plains states are tracking at 4-6 degrees Fahrenheit warmer, the average temperatures for 2016 through the Pacific Northwest are tracking at 0.5-2.5°F or more above the 1981-2010 climate normals.

“With our relatively wet October, western U.S. precipitation is running 110-140% of normal from central California north into western Oregon then across into much of Washington and the northern Rockies,” Jones wrote. “Dry conditions (50-80% of normal) continue to hold across eastern Oregon into Idaho and eastern Montana along with Southern California and across the Southwest.”

La Niña phase could be short-lived 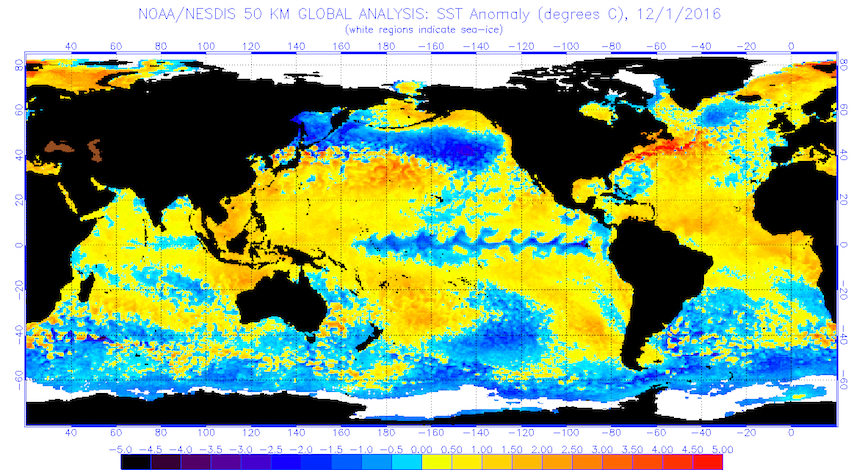 Conditions in the Pacific Ocean have led climate researchers to forecast that the second half of 2016 would signal the transition from El Nino to La Nina. The long and mild October, praised by Northwest winemakers and growers, fit nicely into those models.

“After a couple of months of yes, then no, then yes on La Niña, October conditions in the Tropical Pacific developed enough to call it on and brought the western U.S. a peek at conditions normally observed during La Niña winters,” Jones wrote. “The wet and cool PNW along with warm and dry conditions in California during October showed all the signs of a clear shift to La Niña.

“However, the month of November did not play out the same with generally warm conditions across the west and mixed precipitation for the month,” he added. “Given the current atmospheric and oceanic conditions, along with model forecasts, the forecaster consensus favors the continuation of weak La Niña conditions through December-January-February. In addition, the consensus favors the La Niña to be short-lived, with ENSO-neutral favored beyond December-January-February.”

According to Jones, the Pacific Northwest could experience “wet and coolish” conditions as result of the North Pacific sea surface temperatures (SST).

“If the cool waters extend all the way to West Coast and become entrenched, a very wet winter will likely unfold followed by a cool and late spring,” he wrote. “The next 30 days in Pacific sector SST and circulation pattern developments will be important to watch.” 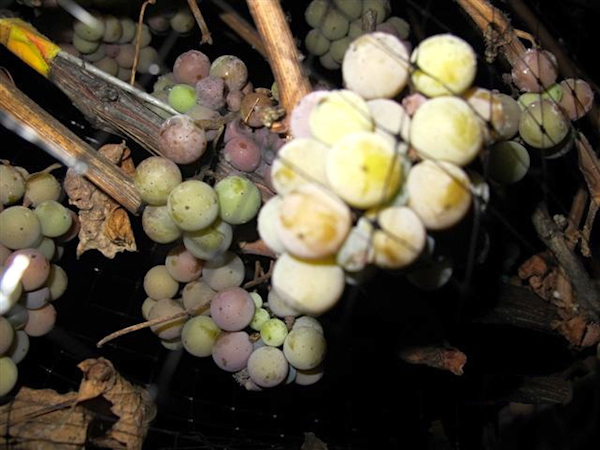 Netting guards berries of Riesling from wildlife in preparation for the 2015 Icewine harvest in the Okanagan Valley near Osoyoos, British Columbia. (Photo courtesy of Constellation Canada)

“During the next 10 days the coldest air of the winter will flow down over the bulk of the United States in a one, two punch,” Jones noted. “The West will not be left unscathed and is likely to see the coldest temperatures of the winter so far, low snow levels and average to greater than average precipitation.”

That may be a trend for the Pacific Northwest through the holiday, and beyond

“The bulk of the PNW and Rockies are given a high likelihood of having a cooler than normal month,” Jones wrote.

Depending upon the strength of La Niña, the National Oceanic and Atmospheric Administration’s Climate Prediction Center projects December-January-February as relatively near normal for the Pacific Northwest.

“The DJF winter precipitation forecast is holding to a likely higher than average rain/snow amounts across the northern states, with much of western Washington, Oregon, Northern California and the center of the U.S. forecasted to have an equal chance to be slightly above average, normal, or slightly below average,” Jones summarized.