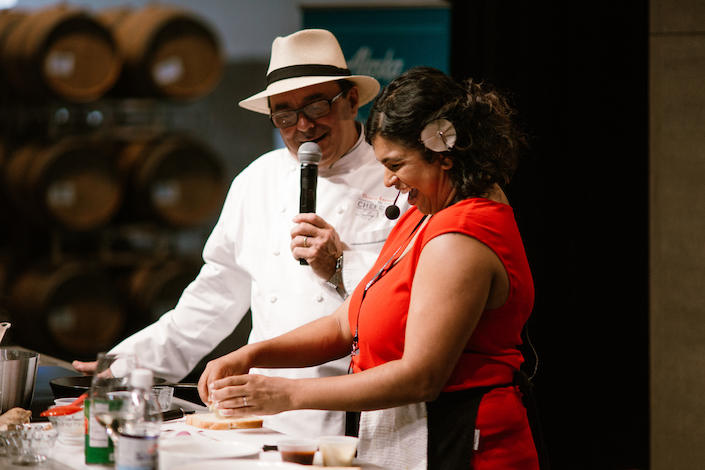 Thierry “Chef in the Hat” Rautureau, an icon in the Seattle restaurant industry, will serve as master of ceremonies for the Alaska Airlines Mileage Plan Chef Stage at Taste Washington 2017, the 20th year of the state’s public celebration of Washington wine. (Photo by Kristen Marie Photography/Courtesy of the Washington State Wine Commission)

SEATTLE — Thierry Rautureau, Seattle’s acclaimed “Chef in the Hat,” will return to Taste Washington next spring and serve as master of ceremonies for the Alaska Airlines Mileage Plan Chef Stage.

Taste Washington, billed as nation’s single-largest food and wine event, celebrates its 20th anniversary March 23-26 throughout the Puget Sound. The festival begins with Red & White Party, The New Vintage and On The Farm. During the March 25-26 Grand Tastings at the CenturyLink Field Event Center, patrons can watch cooking demonstrations and ask culinary questions from 2-5:30 p.m.

“Being immersed in a chef’s cooking process and culinary vision isn’t just entertaining – it also gives everyone a greater appreciation for Pacific Northwest cuisine and our local resources,” Ali Daniels, vice president of marketing at Visit Seattle stated in a news release. 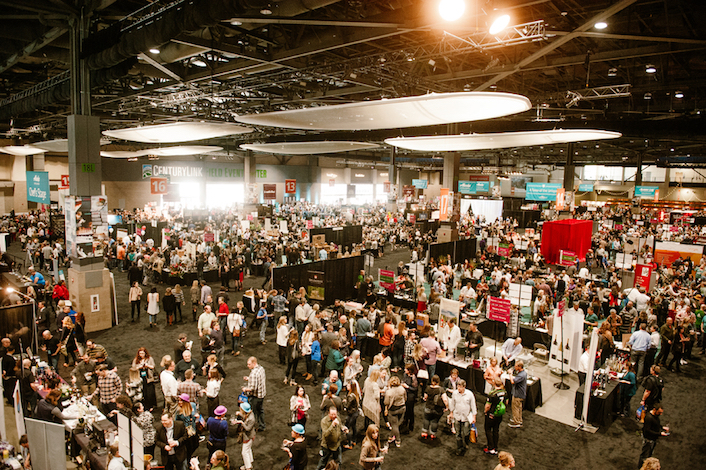 The 20th Taste Washington will be staged March 23-26, 2017 in Seattle, with the Grand Tasting staged Saturday and Sunday at the CenturyLink Field Event Center. (Photo by Kristen Marie Photography/Courtesy of the Washington State Wine Commission)

Gourdet’s fame took flight with a runner-up finish on Season 12 of Bravo TV’s Top Chef series, but his work regionally earned him semifinalist recognition last year for the James Beard Award’s Best Chef Northwest title. He works in both Portland and Denver as culinary director for Departure Restaurants. In 2013, the Oregon Department of Agriculture named him its Chef of the Year. He program for Departure features gluten free, vegan and paleo options.

Kish won Bravo’s Season 10 of Top Chef in Seattle and served as a co-host of 36 Hours on the Travel Channel. Born in South Korea and adopted by a family in Michigan, she attended Le Cordon Bleu in Chicago and worked at Sensing for Guy Martin and Barbara Lynch’s Stir and Menton restaurants. Taste Washington will bring her back from traveling the world to work on her cookbook.

Aside from Rautureau, Stratton might be the most familiar to Taste Washington attendees. A product of Café Juanita, he was co-chef at Poppy before moving on to Spinasse, where he earned a spot on Food & Wine magazine’s list of “10 Best New Chefs for 2010.” He later opened Artusi and Aragona, a James Beard semifinalist for “Best New Restaurant” in 2014. He’s now GM at Mamnoon on Capitol Hill.

White, a product of the U.S. Navy, is known as one of Sea Diego’s top seafood chefs, earning the nickname of “The Seafood Maverick.” His television appearances include Travel Channel’s Bizarre Foods with Andrew Zimmern and Bravo’s Top Chef Season 13. He’s opened restaurants on both sides of the border — La Justina in Tijuana and Craft Pizza Co., and Común Kitchen & Tavern in San Diego — and also has earned acclaim for his work at Sea Rocket Bistro. The Spokane native recently launched Zona Blanca Ceviche in the Lilac City.

And Rautureau will help promote the Alaska Airlines Mileage Plan Chef Stage in the weeks ahead with his Seattle Kitchen Show on KIRO 97.3 FM.

“The Grand Tasting showcases more than 225 wineries and 65 restaurants and is truly the centerpiece of Taste Washington,” Daniels said. “After getting better acquainted with the local food and wine industry at the Red & White Party, The New Vintage, and On the Farm, guests can watch how different celebrity chefs and winemakers bring everything together.”

Organizers offer a $20 discount on the Sunday Grand Tasting general admission tickets with the code 20TASTE if purchased before Jan. 1.