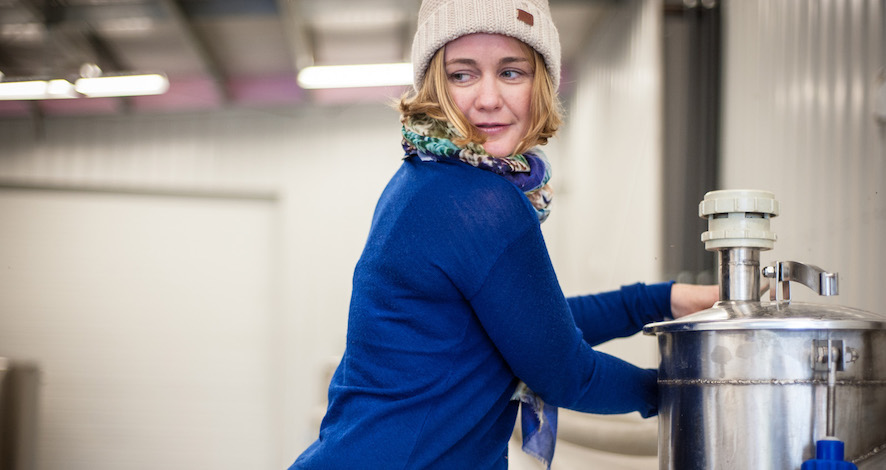 Heidi Noble, owner/winemaker of JoieFarm, launched her winery on the Naramata Bench near Penticton, British Columbia, in 2003. (Photo courtesy of JoieFarm Winery)

PENTICTON, British Columbia — On this day at JoieFarm Winery, Heidi Noble is in state of harvest disarray.

The owner and winemaker on the Naramata Bench has just finished processing 230 tons of grapes from the 2016 harvest, mainly Gewürztraminer, Riesling, Chardonnay and Pinot Noir. She’s dressed for cellar work in a hoodie and knit cap, and although she ransacks her car, Noble can’t find a hairbrush anywhere.

Last year, she bought out ex-husband Michael Dinn’s share of the winery. Now, the pressure, the juggling, the tasting and blending, the picking decisions, the management and hard labor, it’s all hers now. And if anyone were ever up to the task, it would appear to be Heidi Noble.

From kitchen to cellar 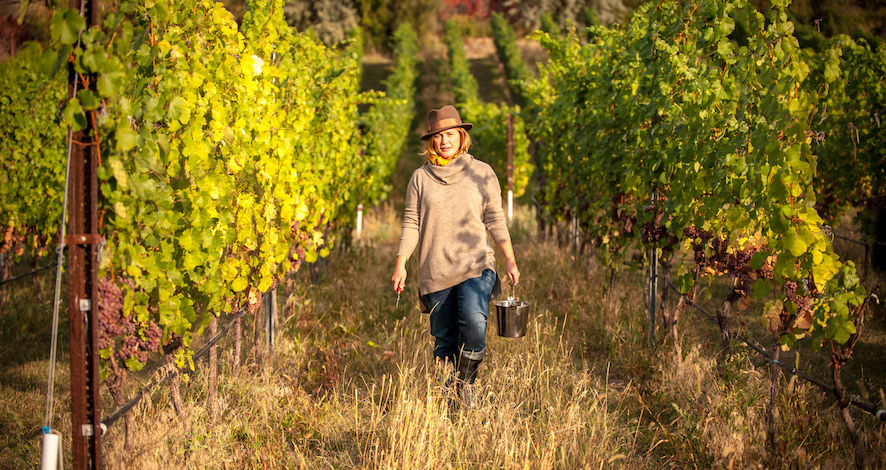 Heidi Noble worked for more than a decade as a chef at restaurants in Vancouver, Toronto and Montreal, before earning her International Sommelier Guild certificate in 2000. (Photo courtesy of JoieFarm Winery)

Noble came to winemaking via the kitchen, as so many winemakers do. She’s a trained chef and has been cooking professionally since she was 14. She cooked for 10 years professionally in Vancouver, Toronto and Montreal, honing her skills and her palate.

Eventually, she got tired of being an underpaid cook. Because wine training was part of her chef training, she naturally turned to wine. She earned a certificate from the International Sommelier Guild in 2000 and spent four years working in the wine trade for a niche wine importer.

Also in 2000 she and Dinn, who had a restaurant background as well, started JoieFarm. As she remembers it…

Mentors in Oregon, BC help with transition 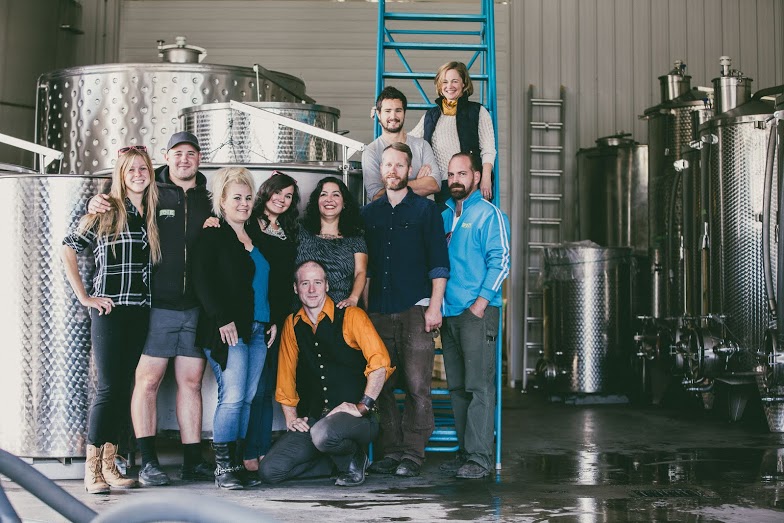 In the past 12 months, Heidi Noble and her team at JoieFarm has grown in numbers and taken production to 17,000 cases while opening a new tasting room. (Photo courtesy of JoieFarm)

“Our initial promise to each other when we got married was that we would not open a restaurant together,” Noble said. “However, we still wanted to continue in the food and wine business, and to take all that joy and love of food and wine and be able to work in that discipline in a different way.”

So the couple bought a farm in the Okanagan Valley on orchard land. Originally, they ran a guest house there, as well as an outdoor cooking school. Both self-taught winemakers, they kept themselves employed with the guest house and school for four years, while learning how to make wine. Along the way they were mentored by, among others, Michael Bartier, now of Bartier Bros. Winery in the Okanagan and John Paul Cameron of Cameron Winery in Oregon’s Dundee Hills. Slowly but surely, Noble and Dinn began to make wine.

“When we started, we were renting space in other friends’ wineries,” says Noble, “and by 2007, we finally had enough money to convert our farm from apple and pear orchards to vineyards, and to build our winery building. And here we are now, we just finished our 13th vintage.”

A favorable microclimate at JoieFarm 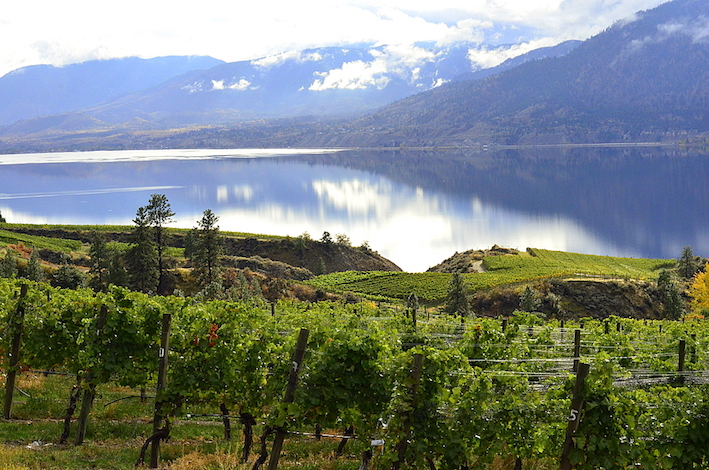 Okanagan Lake, which is 84 miles long and more than 700 feet deep, moderates the climate throughout the Okanagan Valley wine industry. (Photo by Abra Bennett/Great Northwest Wine)

JoieFarm sits high on the Naramata Bench, overlooking the southern end of Lake Okanagan. Its climate on the 50th parallel is marked by highs in the 90s during summer and not often dipping down to single digits in winter. It’s a lake-moderated growing region, one of many benefits from a nearby body of water that’s 84 miles long and as deep as 750 feet.

“That’s key,” Noble explains, “because that gives us huge diurnal swings at harvest time, which is a beautiful condition for making aromatic whites with beautiful high acids to balance all the aromatics. And this year, we had a really long hang time, so the fruit was really phenolically and flavor-developed early on, and we could let it hang without losing any acidity due to early heat, which was a relief after four infernally hot vintages. Those diurnal swings are the magic of this cool climate.”

Noble does all she can to take advantage of this magic, making many of her wines with wild ferments and keeping a laser focus on growing just Alsatian and Burgundian varieties of grapes.

Her fruit is either estate or hyper-local. She has 5 acres of vineyards at the JoieFarm site, and the winery owns another 12 acres closer to Penticton. She also holds a long-term lease on another 25 acres. Additionally, she has long-term growers tending another 40 acres of vines for her.

A focus on Burgundy, Alsace 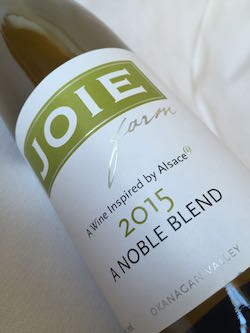 JoieFarm Winery excels at international competitions with its entries involving varieties from Alsace and Burgundy. (Photo by Great Northwest Wine)

With this fruit she makes two unusual blends, a Passe-Tout-Grains which combines Pinot Noir and Gamay in the Burgundian style, and what she calls A Noble Blend, an Alsatian-style blend of Riesling, Pinot Blanc, Gewürztraminer, Auxerrois and Muscat. She makes both unoaked and barrel-fermented examples of Chardonnay, as well as a couple of sparkling wines, two styles of Rieslings and single-varietal bottlings of Pinot Noir, Gamay, Viognier, Pinot Blanc and Muscat.

Her white wines are renowned, winning Best British Columbia Winery for White Wines awards in 2014, 2015 and 2016.

“Our hallmark is lots of juicy fruit with a lot of acidity to turn up the volume on the fruit, we like to call it juicidity,” Noble said. “My main goal as a winemaker is natural balance. I make wine like a cook, so I like a savory counterpoint to the fruit.

“The Mâcon is a good reference point for us here in the Okanagan,” she continues, still thinking like a chef. “The food of the Pacific Northwest demands a white or a medium-weight red. There’s not a lot of call for big Bordeaux blends, particularly in Vancouver where the cuisine is mainly seafood and shellfish-based and there’s a ton of Asian influence. That is not a cuisine for big red wine.” 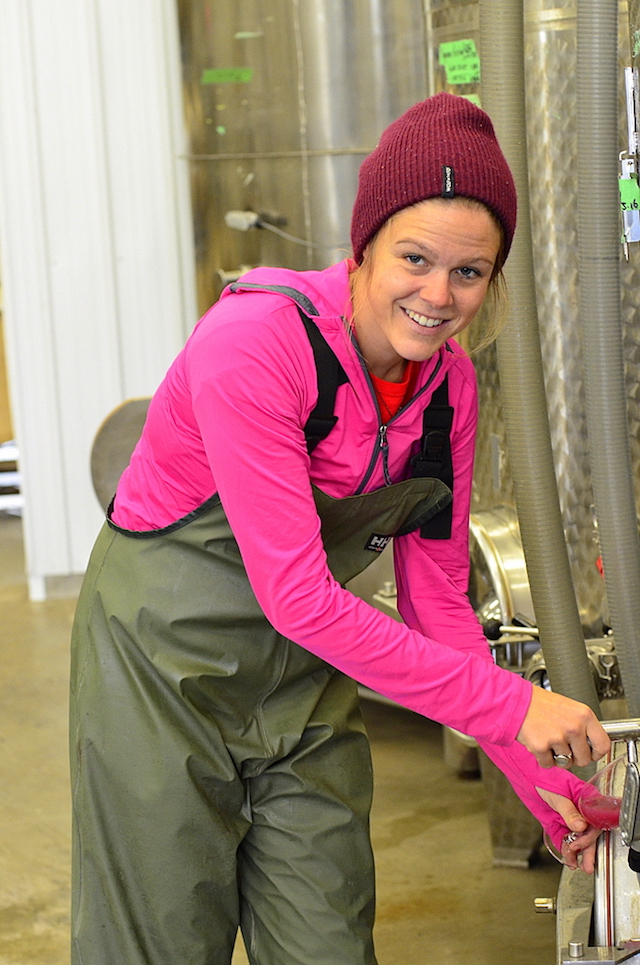 Tasting room manager Jennifer Carter, who is also a cellar hand, has extensive restaurant background and was a consulting sommelier in Victoria before coming to JoieFarm. (Photo by Abra Bennett/Great Northwest Wine)

Noble’s chef-think and restaurant industry connections are the lifeblood of JoieFarm. She finally opened a tasting room last year, for the first time, because she believed that only then she had enough wine to operate a tasting room. Most winemakers would find it unthinkable to make wine for 12 years and never have enough available to stock a tasting room. Where was it all going?

“We were so trade-focused, because of our background, that all the wine we could ever afford to make went back into the restaurant industry,” Noble said. “All of our friends and contacts would buy every drop of our wine. We now make 17,000 cases of wine, and I can still barely keep all of our long-term customers supplied, mostly our wine goes to Vancouver. I’m a chef/winemaker making wine for my restaurant community.”

“There are no talking heads in my tasting room,” Noble says emphatically. “And all my tasting room staff love to eat. That’s key, since I make very food-driven wines.”

Tasting room manager Jennifer Carter, who is also a cellar hand, agrees. Carter also has extensive restaurant background and was a consulting sommelier in Victoria before coming to JoieFarm.

“Since we all work in the cellar, it makes the tasting room experience really exceptional, because of the level of conversation we can have with our guests,” Carter said.

A good climate for women 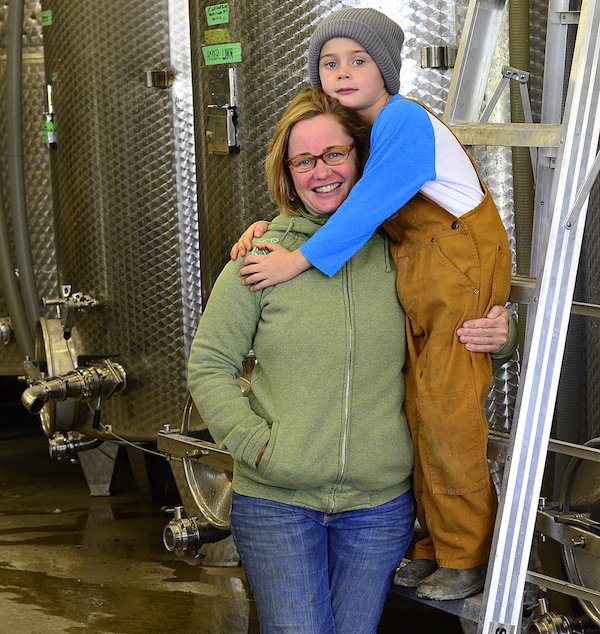 Spend an hour or two with Noble and you will soon realize that she has an exhaustive knowledge of every aspect of the winery’s operation. She’s done it all. And last year she enhanced that knowledge when the winery was subject to a complete business valuation as part of Noble’s becoming the sole owner, leading her to joke “I pretty much have a walking MBA at this point.”

It’s a huge undertaking, and it’s easy to see why a hairbrush is the last thing on her mind. She oversees 82 acres of vineyards, processes 230 tons of grapes, makes 17,000 cases of wine, manages a staff of 12 and is building a new tasting room. Luckily she has the devoted help of her son Theo, age 6, who has his own small version of a cellar hand’s overalls and boots, and reportedly is always wanting to pitch in.

During the years, as she gained experience and confidence, she has made a place for herself as a pioneering woman in the Okanagan wine industry.

“The climate for women winemakers in the Okanagan is absolutely friendly,” Noble says. “We have a progressively younger team of winemakers here, and we have a very open community, which wasn’t the case when I first came here.

“At that time, a lot of the winemakers and growers were older and a little bit rigid and not very forthcoming with their information,” she added. “Occasionally, growers wouldn’t even deal with me unless I came to them with my husband.”

It’s difficult to imagine anyone saying that to her now, with her financial success and the critical acclaim of her wines attesting to the fact that if you know your community and make the wines that will complement their cuisine to perfection, success will find you, whoever and wherever you are.