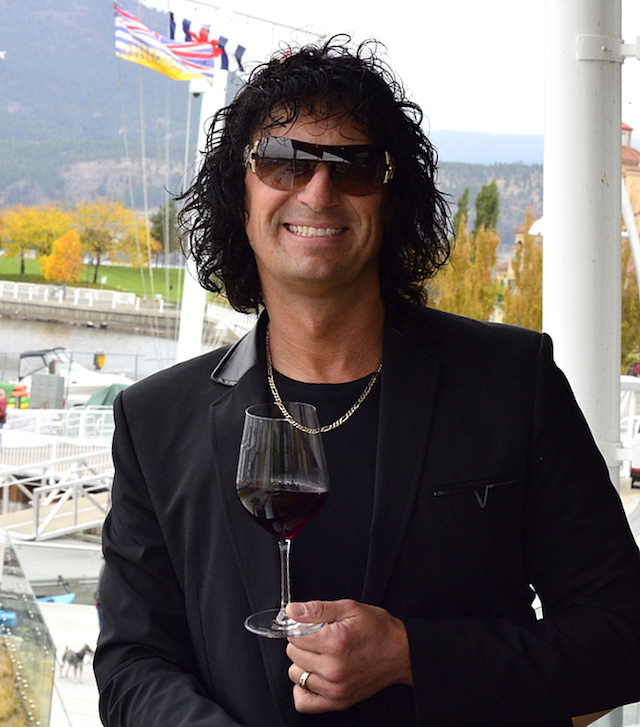 Curtis Krouzel and his wife, Sheri-Lee, are the driving forces behind 50th Parallel Estate Winery in Lake Country, British Columbia. They are creating a destination winery that overlooks Okanagan Lake and features wines by Grant Stanley. (Photo by Abra Bennett/Great Northwest Wine)

LAKE COUNTRY, British Columbia — Few principals in the British Columbia wine industry are as flamboyant as Curtis Krouzel, yet his passion and dedication at 50th Parallel Estate Winery have meshed with winemaking talent Grant Stanley to produce some of the Pacific Northwest’s most sophisticated wines.

Krouzel and his wife, Sheri-Lee Turner-Krouzel, established 50th Parallel Estate’s winery and vineyards overlooking Okanagan Lake near the community of Lake Country, a 30-minute drive north of Kelowna. He’s a first-generation Canadian, his father was Czechoslovakian and his mother a Slovak. Before launching himself in the winemaking business, he owned an oil and gas engineering services company. That technical background shows throughout the winery.

“I spent almost 12 years reading up on grapevine physiology before we even started this project,” he said. “I was studying different areas to locate the winery, putting up weather stations, and doing soil monitoring. Sometimes, I was digging holes in other people’s vineyards, jumping fences to grab soil and plant tissue samples, trying to learn what works and what doesn’t.”

Last fall, the 50th Parallel Estate attracted the attention of judges in the United States. The 50th Parallel Estate 2014 Chardonnay earned a double gold and the 2015 Riesling a gold medal at the 2016 Great Northwest Invitational Wine Competition, an international judging for wine buyers staged at the Columbia Gorge Hotel in Hood River, Ore. The young vines behind the 2014 Unparalleled Pinot Noir helped that wine earn a silver.

The Krouzels and their group of more than a dozen backers, which includes Stanley, plan to invest as much as $30 million on the destination winery, vineyard, restaurant and events center.

From Quonset to state of the art 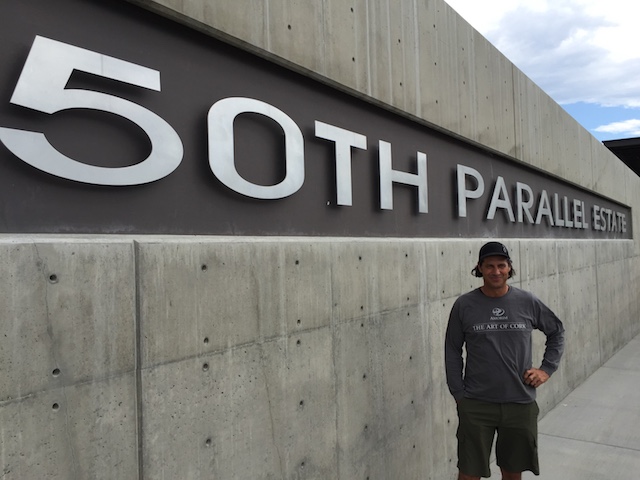 50th Parallel started in 2009 with “a little Quonset building in the middle of nowhere,” Krouzel said, in an area with no other vineyards. The Krouzels planted their first 10 acres by hand, with a small group of French-Canadian laborers. They have 61 acres, of which 55 are planted with vines.

“The vineyard is right on the water so we get a lot of light, and we’ve oriented the rows to our perfect light angle,” Krouzel said. “The lake acts like a second sun for us, with its reflected light. And we have great feldspar-based granite soils.”

Their focus is on Pinot Noir, which is their only red, and aromatic whites: Pinot Gris, Gewürztraminer, Chardonnay and Riesling.

“We’re right at the beginning of where the glacier started to make Lake Okanagan, and that gives us a very expressive minerality, especially in our Riesling. And it’s a really deep body of water, almost 2,000 feet, so the lake effect, moderating our temperatures, both high and low, is significant.”

And the climate at the 50th parallel essentially eliminates the need for pesticides, other than occasional applications of sulfur.

“One of the things about growing grapes in the Okanagan is that it is really a disease-free environment,” Stanley said. “We have a great opportunity every year to produce great fruit.” 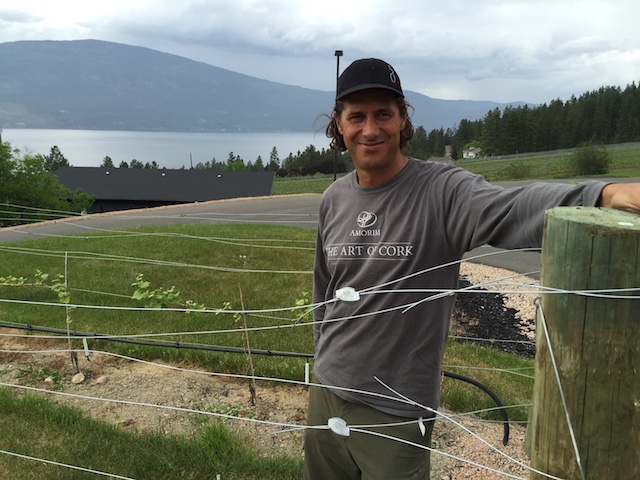 Grant Stanley was born in Vancouver, British Columbia, but trained as a winemaker in New Zealand. Now, his attention is focused on growing Pinot Noir, Chardonnay and Riesling at 50th Parallel Estate Winery. (Photo by Eric Degerman/Great Northwest Wine)

Krouzel has an affinity for winemakers from New Zealand. He views them as being especially technically proficient because they’re used to dealing with weather extremes similar to those faced by winemakers in the Okanagan Valley.

Stanley, born in Vancouver to New Zealand immigrants, began his winemaking career in the Marlborough region of New Zealand. After 15 vintages in New Zealand and Oregon’s Willamette Valley, he moved to Canada and headed up the winemaking team at Quails’ Gate Estate Winery in West Kelowna.

“Curtis and Sheri-Lee came to one of my winemaker dinners in 2006, and started asking me how they could get involved in the industry,” Stanley said. “I kept them abreast of any real estate opportunities in the area when they popped up, including this one.” 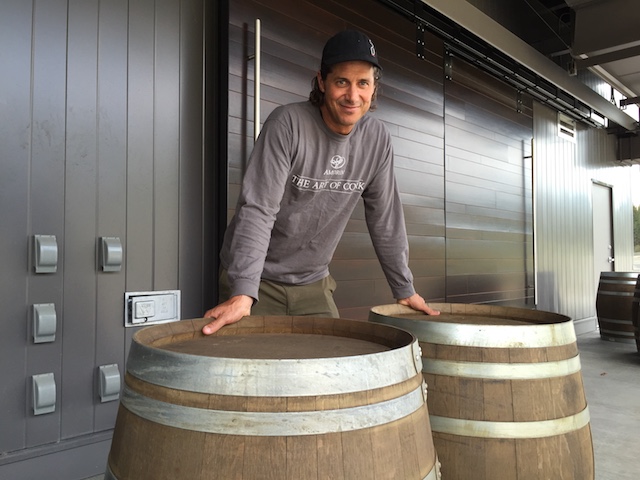 Grant Stanley headed up a wine program that produced more than 60,000 cases a year at Quails’ Gate in Kelowna. He now works with about 15,000 cases. (Photo by Eric Degerman/Great Northwest Wine)

Stanley’s career at Quails’ Gate spanned a decade prior to joining the Krouzels not only as a winemaker, but also an investor. He took over their wine program from New Zealand-born Adrian Baker.

“In 2013, they were showing me renderings of this facility, and by then there were 30 acres in the ground and producing,” Stanley said. “At that point, I saw it as a great opportunity so I jumped ship.

“And the relationship was really about me and Pinot Noir more than myself and the owners,” he added. “This is a great chance to make premium Pinot Noir. At Quails’ Gate, I was making Maréchal Foch and then Pinot Noir and then Cabernet and then Merlot. It was a lot of managing resources. As I’m getting toward my 50s, I want to make the wines I want to make and be more boutique and artisan in the approach.”

When he left, Stanley said Quails’ Gate production was closing in on 70,000 cases among the 28 different offerings.

“The bigger you get, the more staff and more management and administration you end up conducting,” he said. “Now, I get to pretty much do everything. It’s a lifestyle choice.”

“When I came here there was no winery, so it was like going back into small-lot winemaking in a big way,” Stanley said. “We built this and moved in here for the harvest in 2014. I had the luxury that no other winemaker had – more space than grapes. It’s been a great experience having more resources than I’m used to.” 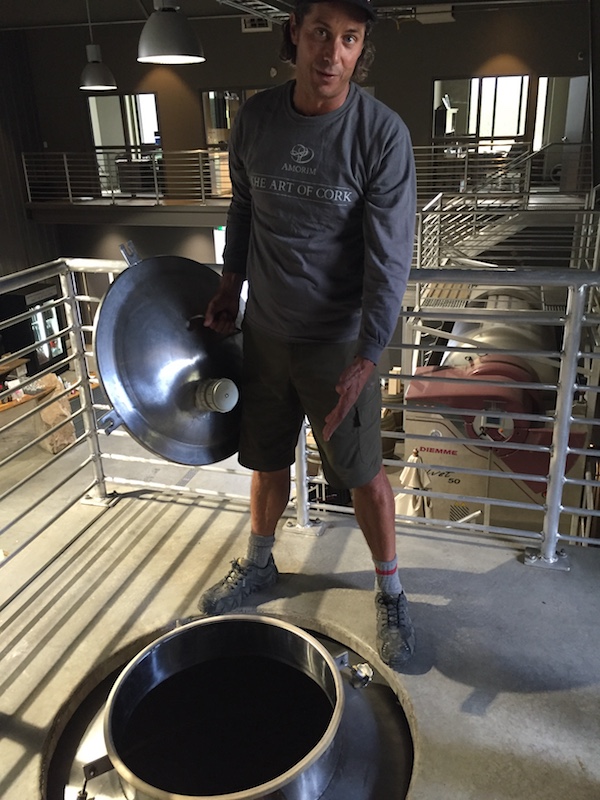 Together, the Krouzels and Stanley designed a winery with the goal of making life easy on their Pinot Noir, creating the shortest possible distance from where the fruit arrives on the loading dock to getting it into tank.

In consultation with designers and the winery’s architect, Krouzel designed a destemmer on wheels, with a conveyor, so that the fruit is dropped into the destemmer, which is rolled directly over the tank, and the destemmed fruit falls right into the tank, with no additional transport steps.

The tank is filled with an inert gas, so there’s only about one foot of air contact as the fruit falls from the destemmer into the tank, reducing the possibility of oxidation to the bare minimum. He also designed a floating crush pad that hangs above the tanks, so that the tanks can be tipped after fermentation directly into the press, with no pumping.

“50th Parallel, when it’s done, will be a $30 million development, focused on the wine, obviously, but really it’s about the total experience,” Krouzel said. “Once people are here, they can walk to the beach with a glass of wine, and we’re creating a beautiful restaurant and an event space. Our passion has been focused around building a great destination winery.”

However, Stanley’s attention will be on the wines and vines.

“We planted a few rows of Syrah, and it’s done really well with the last few years,” Stanley said. “We have eight clones of Pinot Noir in the ground. The first plantings in ’08 and ’09 are starting to reach a certain level of maturity, but the picking decisions are not based on anything other than when I decide it’s ready to go.

“And once I get it in the building, there’s no hurry for it to leave the building or vacate the fermenter. I have much more freedom in terms of long-term skin contact. That’s how I like to make wine — spontaneous fermentations and seven-day cold soaks and 21 to 28 days on skins. The luxuries are now a reality for me.”