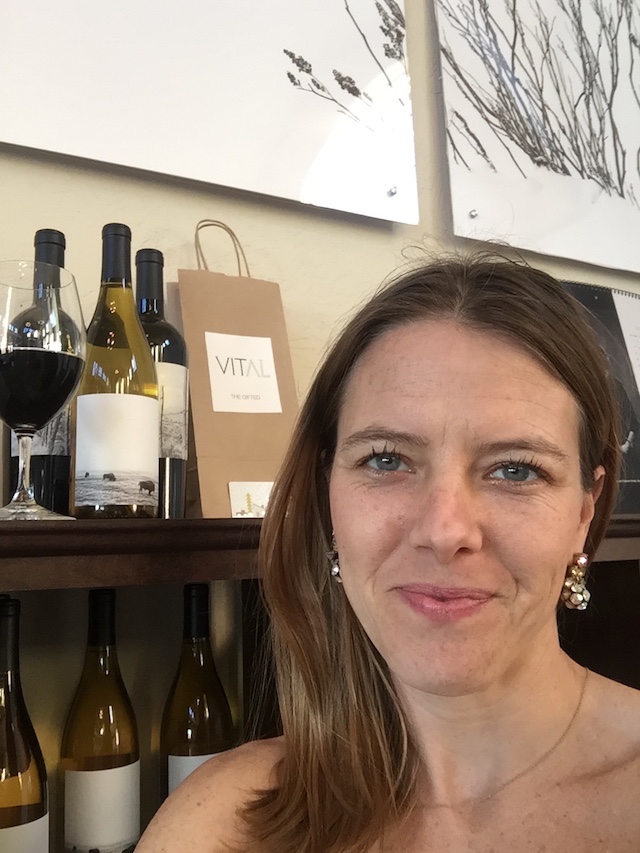 Walla Walla winemaker Ashley Trout, the founder and talent behind Vital Wines and March Cellars, has been invited to pour both brands in Los Angeles as part of a Hollywood event leading up to the Oscars. (Photo courtesy of Silver Strategic Communications)

WALLA WALLA, Wash. – The eve of The Oscars is turning into a wine social in advance of the 89th Academy Awards, and Walla Walla winemaker Ashley Trout will be pouring for celebrities and Hollywood executives Saturday in Los Angeles.

Trout, who founded Vital Wines and March Cellars, will be presenting both brands within a pre-Oscars gifting suite at the Millennium Biltmore Hotel in Los Angeles. (Here’s a Huffington Post article about last year’s gift lounges.)

“We were honored to be invited to participate in this year’s Academy Awards events,” Trout stated in a news release. “When the invitation came in, we jumped at the chance to show Hollywood what March, Vital and Walla Walla wines are all about.”

Trout and her team will pour the wines for several hundred Hollywood influentials, and it is believed to be the first time a Walla Walla winery has been invited to attend and pour wine at the events leading up to the Oscars, she said.

“Vital Wines is dedicated to making a difference in the lives of those less fortunate, and it’s a mission that has resonated within Washington’s wine community,” Trout said. “March is dedicated to the pioneers who risked everything to help settle the West. Both of those attributes are celebrated annually by the Oscars.”

In Los Angeles, Trout will pour The Gifted, a red blend under the Vital brand, and Chardonnay from March Cellars.

Last year, Trout launched both Vital Wines and March Cellars. Vital is a community-driven, nonprofit winery dedicated to providing better healthcare for vineyard and winery workers in the Walla Walla Valley. Its slogan is “Taking care of each other,” and all profits are donated to SOS Health Services of Walla Walla. It is the first effort of its kind designed to support seasonal vineyard and winery workers in Washington state’s $5 billion wine industry.

For Trout, the Vital Wines effort stems from a serious rock-climbing accident the Washington, D.C., native suffered in Japan — a fall of 40 feet — more than a decade ago. She found herself hospitalized for 42 days in a foreign country without health insurance. The memories of that ordeal remain.

Vital Wines has received donations from some of the best vineyards, bottling companies, distributors and service providers in the Pacific Northwest. The winery launched in March 2016 and aims to produce 500 cases annually.

“I know that the wine drinkers among the Hollywood crowd are going to be blown away by Washington wines if they aren’t already familiar with them,” she said. “I think the mission of Vital and the elegance of March will resonate with our guests at our event, and I can’t wait to share the wines with them.”

March Cellars is Trout’s tribute to the spirit of the American West.

“In the 1800s, when people were moving west across the prairies and mountains, March used to be the last month someone could head west and expect to make it there alive,” Trout said. “Like those who came before us, we believe that beautiful things come from risk and hardship. We try to infuse that spirit into the wines of March Cellars.” 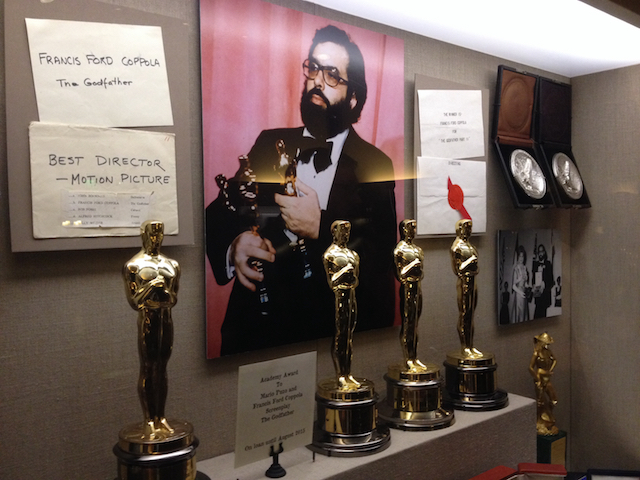 One of the past displays at Francis Ford Coppola Winery in Geyserville, Calif., featured memories and mementos of the director’s historic night at the 1972 Oscars. (Photo by Eric Degerman/Great Northwest Wine)

This year seems to have prompted more Northwest wine promotions tied to cinema’s biggest show than ever before. Not far from Trout, there’s Northstar Winery – the Ste. Michelle Wine Estates property that gets two thumbs up for more than its famous Merlot program.

“Gearing up for the big movie award show? Gather with friends and family and enjoy Northstar wines while cheering for your favorite star. Roll out the red carpet for your guests by opening up the best red wines Washington has to offer,” the promotion reads.

Food and Wine magazine has published a standing item on its site that offers tips for playing host to awards show viewing parties. Sokol Blosser in Oregon’s Dundee Hills has gone so far as to suggest which of its wines — and why — would pair with each of this year’s nominees for Best Actress.

Isabelle Huppert, Elle: “Critics say Huppert’s performance is captivating, yet restrained which is why we think it pairs beautifully with Sokol Blosser’s 2015 Willamette Valley Pinot Gris.”

Natalie Portman, Jackie: “Hollywood insiders say that Portman’s portrayal of Jackie Kennedy may just be better than her Oscar-winning performance in Black Swan. With the iconic first lady in mind, we wanted to pair a classic wine thus we think the 2014 Dundee Hills Pinot Noir.”

Emma Stone, La La Land: “Playing an aspiring actress who must choose between love and career, Stone is the favorite to take home the statue on awards night. So why not pair her performance with a winner of a wine, the Evolution Brut Sparkling, which ‘pairs well with Stone’s effervescent performance.’ ”

Meryl Streep, Florence Foster Jenkins: “Streep, the most nominated actress EVER, plays Florence Foster Jenkins, a New York heiress who dreamed of becoming an opera singer, despite having an awful singing voice. The perfect wine for a high society gal, you ask? Well we think it’s the newest member of the Evolution family – Evolution Pinot Noir. ‘Dangerously juicy.’ ”

Sunday’s program also includes a performance by one of the globe’s most famous winery owners — Sting. Last year, many of his fans learned just how important wine is to The Police frontman when Wine Spectator turned him and wife Trudie Styler into a cover story.

Here’s the link to the 65-year-old’s simple yet stunning rendition of Message in a Bottle at last year’s Wine Spectator New York Wine Experience. Styler introduces her partner and co-owner of Il Palagio at the 12-minute mark.

Then there’s Francis Ford Coppola. The movie industry’s accomplished Sonoma producer has the market cornered at this year’s Academy Awards and the Governors Ball post-show party. According to Decanter magazine, Coppola’s team plans to pour 176 cases of wine between the two events Sunday.