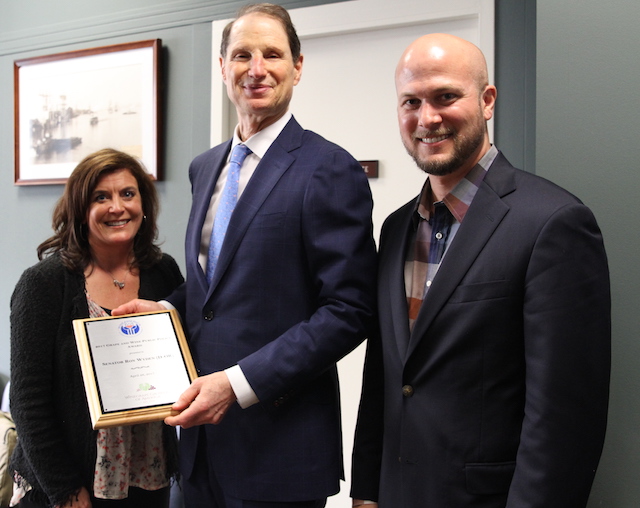 Wyden received the award last week in Washington, D.C., during a national policy conference staged by WineAmerica and the Winegrape Growers of America.

“Senator Wyden has been a true champion of Oregon wines for years,” said Janie Brooks Heuck, secretary of the WineAmerica board of directors, stated in a news release. “As the owner of Brooks Wines in the Willamette Valley, I have benefited firsthand from his strong leadership, so it is a pleasure for me to help recognize him.”

Wyden was credited with working to modernize the Alcohol and Tobacco Tax and Trade Bureau, and acted as the chief Senate sponsor of the Craft Beverage Modernization and Tax Reform Act. The initiative is described as the first comprehensive federal alcohol excise tax reform proposal that includes tax relief for wineries, breweries and distilleries.

John Aguirre, executive director of Winegrape Growers of America, said, “Senator Wyden defies the conventional view that Washington, D.C., is broken. He is an effective, results-oriented legislator who demonstrates a ready willingness to work on a bipartisan basis.”

WineAmerica chairman Trent Preszler, CEO of Bedell Cellars in New York, said, “There are wineries in all 50 states, and we need the type of broad-based leadership that Senator Wyden has provided to advance this all-American industry. We are truly grateful for his support.”

Both organizations plan to present the Grape and Wine Public Policy Leadership Award on an annual basis to a lawmaker who shows leadership on issues of importance to the American wine and grape industries.

Wyden, a resident of Portland, has been a member of Congress since 1981. The former University of  California-Santa Barbara basketball player graduated from Stanford before receiving a law degree from the University of Oregon. He was elected to the Senate in 1996, replacing scandal-plagued Bob Packwood. Wyden became Oregon’s first Democrat in 35 years to be elected to the Senate.

WineAmerica, headquartered in the nation’s capital, describes itself as “the national voice the American wine industry.” The group represents wineries in 43 states and leads a coalition of state and regional wine and grape associations.