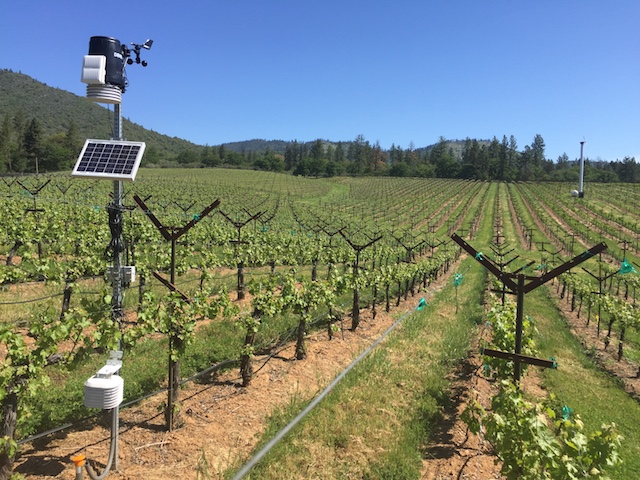 Mae’s Vineyard, an estate planting in Southern Oregon’s Applegate Valley for Quady North, is tracking well behind the warm vintages of 2012 through 2016. (Photo by Eric Degerman/Great Northwest Wine)

May has been a cool and soggy extension of April and March in Pacific Northwest vineyards for the 2017 vintage.

Greg Jones, a Southern Oregon University professor and one of the wine world’s leading climate scientists, cited growing degree days to indicate the 2017 vintage is on track to be among the coolest of the decade.

“January through April accumulations are running right at the 1981-2010 normals throughout much of the western wine regions, with the exception of warmer areas in central to southern California and cooler areas in eastern Washington and Oregon,” Jones wrote in his latest Spring Weather/Climate Update and Forecast report for the Pacific Northwest wine industry.

“The cold winter has continued into the spring with the first four months of 2017 resulting in very cold conditions across the PNW with observations running 1-5°F below normal,” Jones wrote. “The core of the coldest area continues to straddle the Columbia Valley into eastern Washington and eastern Oregon, while central to northern California and Nevada have experienced slightly below average to slightly above average temperatures.” 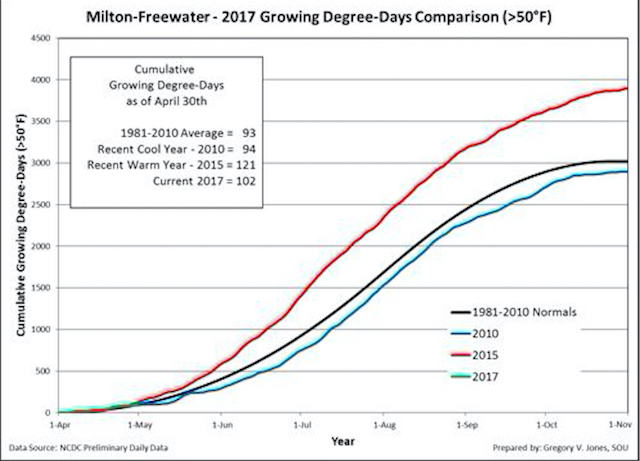 Growing degree day accumulations for weather reporting stations in the Walla Walla Valley, the Willamette Valley, the Umpqua Valley and Rogue Valley have started out at near the 1981-2010 normals for this period. (Data from the National Climatic Data Center/Charts by Greg Jones, Southern Oregon University) 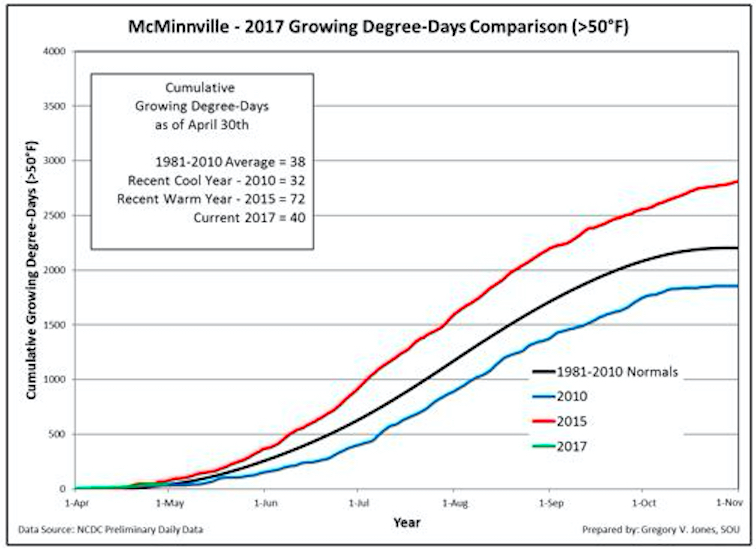 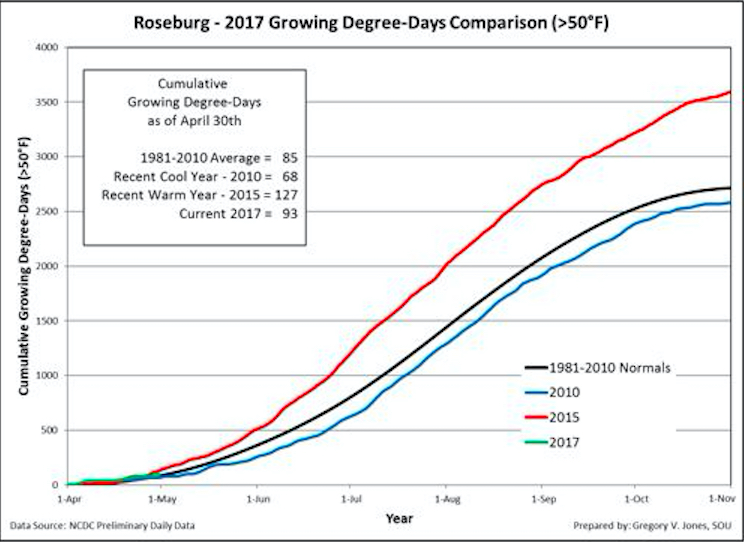 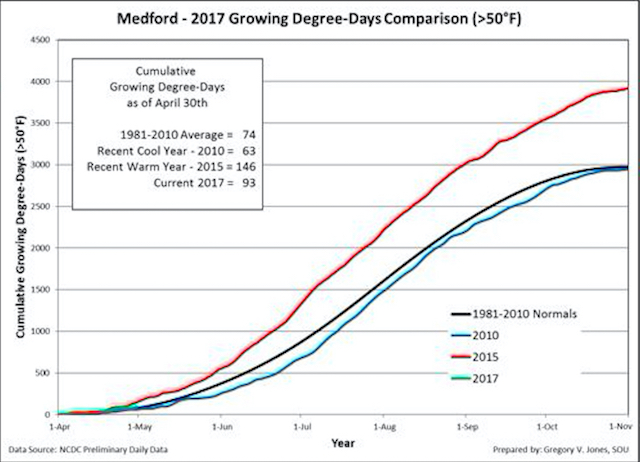 The 2015 vintage set records for growing degree days throughout the Pacific Northwest, but aside from Southern Oregon, the 2016 vintage won’t come close to those last year’s marks.

Washington State University’s AgWeatherNet charts growing degree days across the state as well as parts of Oregon. Through April 30, there were a mere 69 growing degrees days recorded at the Wahluke Slope station. A year ago, it charted 335 GDD, but the recent six-year average was 165. It was ahead of the 24 GDD from the cool vintage of 2011.

At the Snipes station in the Yakima Valley, there were 59 GDD registered. A year ago, the accumulation stood at 286 GDD, with the six-year average at 140, which includes the 18 GDD of 2011.

In the heart of the Willamette Valley, Jones’ station checked in with 40 GDD. In record-warm 2015 vintage, the McMinnville device stood at 72. That’s compared with the 38 of the three-decade average, which includes the 32 GDD from 2010. 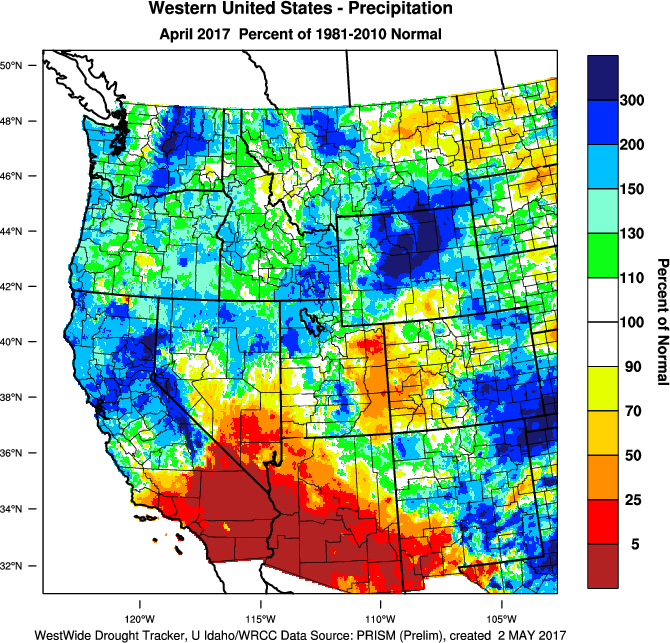 This chart of the West Coast of the United States reflects the precipitation departure from normal for the month of April 2017. (Image from the WestWide Drought Tracker, Western Region Climate Center and University of Idaho/courtesy of Greg Jones)

April also brought as much as 150 percent of normal precipitation to the Northwest.

“The cool conditions throughout the PNW and even California have slowed bud break and spring growth to average conditions compared to the past few years,” Jones wrote. “Fortunately, to this point there has been little to no frost pressure, unlike the devastating events of late April throughout much of Europe.”

The forecast for this week, provided by Jones calls for more cool and occasionally wet weather, prompted by upper-level troughing.

“The entire western U.S. to the Rockies is forecast to have a greater than average chance for cool conditions, with frost potential not expected unless there are clearing skies after one of the troughs passes,” he predicted. “In term of precipitation, the PNW and northern Rockies are likely to see wetter than normal conditions through mid-month while central to southern California and the desert southwest are likely to be drier than normal.”

It’s a dramatically different spring compared with 2016, which generated growing degree days that placed it well ahead of record-setting warm 2015 vintage. At this point, growers are making adjustments in their vineyards.

Traditionally, growers embrace Mother’s Day as the end of frost worries. However, Jones seemed to indicate there’s still a chance of frost through May 23.

“West Coast wine regions will likely stay cooler than average, but frost is hit or miss depending on the transitions from troughs to ridges and clearing skies,” Jones said.

In terms of precipitation, rest of May calls for near normal levels in the Northwest, although models show Oregon with greater odds of being drier than normal. 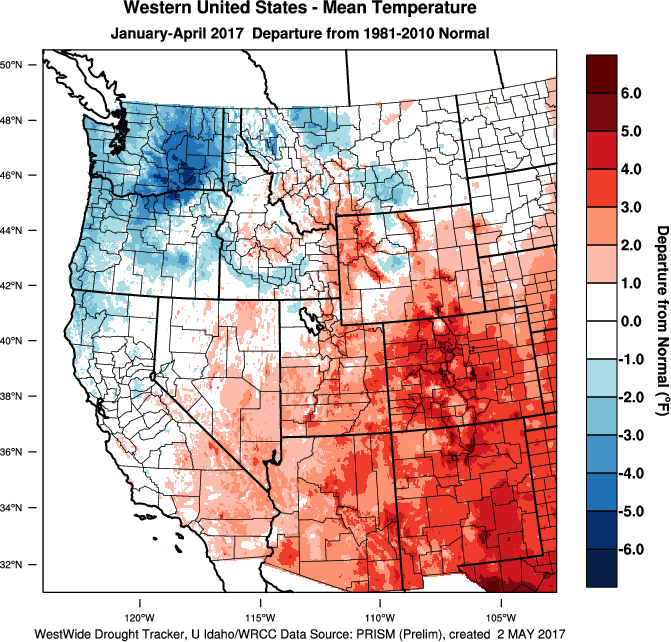 This chart of the West Coast of the United States reflects the temperature departure from normal for 2017. (Image from the WestWide Drought Tracker, Western Region Climate Center and University of Idaho/courtesy of Greg Jones)

And the 90-day outlook for May-June-July into veraison from the Climate Prediction Center indicates the Pacific Northwest may well continue to experience slightly above to slightly below average temperatures.

It would seem highly unlikely that the growing degree days for the region will catch up and create conditions that led to the historic June 23 discovery of veraison in Marquette grapes at famed Champoux Vineyards in the Horse Heaven Hills of Washington state.

“In other words, this region will likely see close to normal spring into summer temperatures,” Jones wrote. “The MJJ precipitation forecast for the West Coast is holding to average conditions, or in other words seasonally dry.” 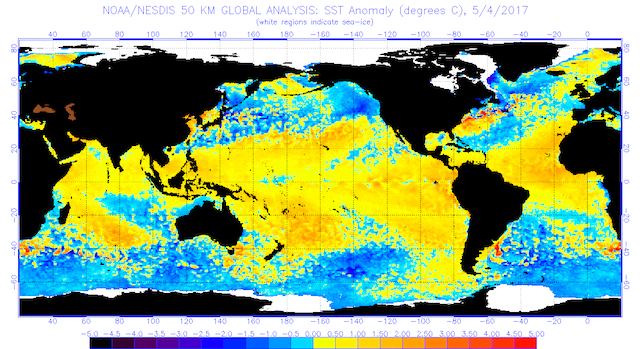 This chart indicates the global sea surface temperatures (°C) as of May 4, 2017. (Image from National Oceanic and Atmospheric Administration/National Environmental Satellite, Data and Information Service)

There are indications in the equatorial sea surface temperatures (SST) that another El Niño-Southern Oscillation is on the way.

“The main core of the ENSO monitoring region in the eastern Pacific Ocean (near Central and South America) has continued to warm, likely leading to El Niño development in the summer and fall,” Jones wrote.

“If the models and forecast agencies are correct in their call for El Niño conditions (warmer than average tropical SSTs) to develop by summer or early fall, we will likely see some transition to overall warmer and moister conditions in the Tropical Pacific sector,” he continued. “These conditions can warm the western U.S. slightly but need to be considered along with the North Pacific conditions. I will continue to watch these models over the next month or two to get a read on potential influences to ripening periods across the West.”

“Also of note that our winter/spring flow of the mid-latitude westerlies has produced a pattern of troughing in the west (cool/wet) and ridging in the east (warm/dry), but also the conditions that ushered in early vine growth in Europe followed by devastating frosts in many wine regions,” Jones wrote. “Climate scientists are pointing to enhanced warming in the Arctic leading to a weaker temperature gradient between the tropics and the poles, resulting in more occurrences of a wavy, amplified jet stream capable of producing more extreme weather in the mid-latitudes.”