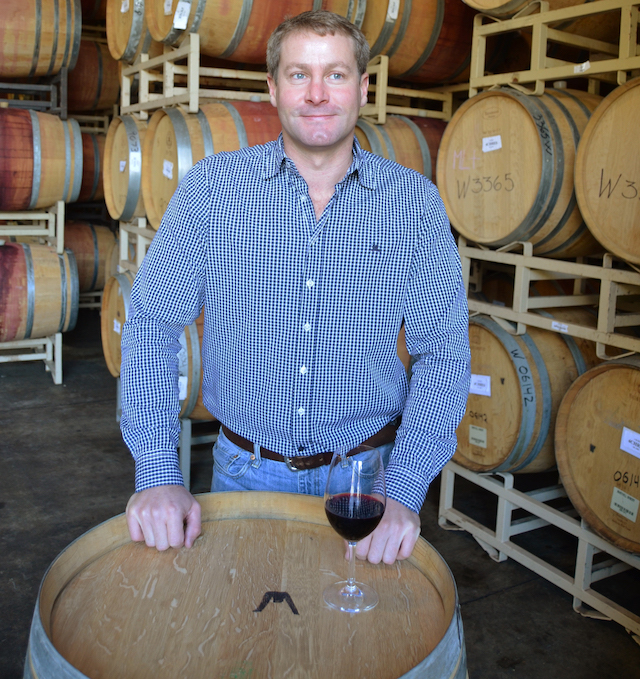 Maryhill Winery’s Richard Batchelor produced a 2016 rosé of Sangiovese that was voted best of show at the 34th annual Washington State Wine Competition in Grandview. It was one of 15 gold medals his wines earned during the June 20 judging of 311 wines. (Photo courtesy of Maryhill Winery)

GRANDVIEW, Wash. — Maryhill Winery, a destination for Columbia Gorge travelers, dominated the 34th annual Washington State Wine Competition with a showing of 15 gold medals that included seven best of class awards, best white wine and best of show for its 2016 Rosé of Sangiovese.

“Rosé seems to have become the wine of the millennial,” said Maryhill co-owner Craig Leuthold. “They have embraced it as their own.

“In Florida, I couldn’t give away rosé until last year,” Leuthold added. “Then all of a sudden, in restaurants and forward-thinking cities like Tampa, rosé became a hit.”

Leuthold praised his New Zealand-born winemaker, Richard Batchelor, and the work performed by their growers. In the case of the $16 rosé and the 2016 Pinot Gris voted best white wine, the fruit for both came from Tudor Hills Vineyards in the Yakima Valley.

“Richard has done such a wonderful job and he’s disciplined in his winemaking to be a good shepherd,” Leuthold said. “The best winemakers try to use as much of a hands-off approach and work with the vineyard managers who are doing everything they can to supply us with the best fruit possible. The die is already cast before the grapes are brought here.”

The Tudor family also owns and farms historic Otis Vineyard, which produced the 2016 Reserve Albariño that was voted as the top other white wine. Maryhill’s other best-of-class awards were for Carménère from grower Joe Hattrup’s Elephant Mountain Vineyards, Syrah and Merlot. 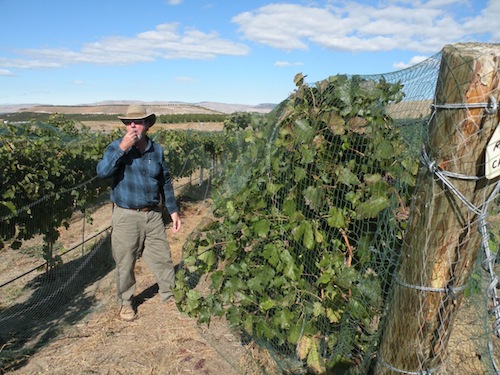 Spokane’s Barrister Winery once again won a best-of-class award for Cabernet Franc, and the attorney-owned brand also grabbed a unanimous double gold medal for its work with Merlot and a gold medal for perennially popular Rough Justice Red Wine.

The Miller family’s Airfield Estates project in the Yakima Valley claimed a double gold and best of class for Viognier, and it grew the grapes for the Cedar River Cellars 2016 Mormor Riesling that merited a double gold. Airfield’s 2015 Malbec also received a gold medal.

Plumb Cellars in Walla Walla merited three gold medals for red wines. There were a trio of gold medals awarded to San Juan Vineyards,  two of those for white wines from the Puget Sound American Viticultural Area.

Chateau Ste. Michelle continued to show why it ranks among the elite Riesling producers in the world when its 2016 Dry Riesling earned a best of class and double gold and the 2015 Eroica picked up a gold medal. 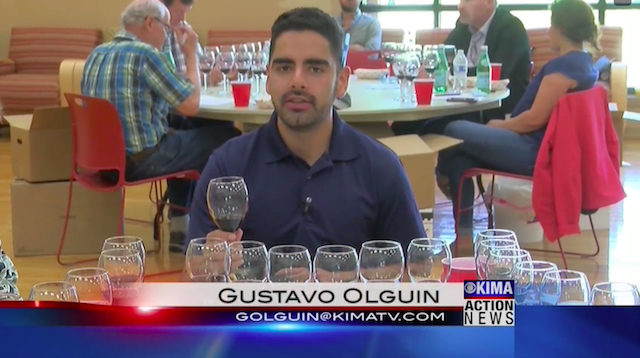 Gustavo Olguin of KIMA-TV in Yakima sits in on the panel that determined the best Cabernet Sauvignon entered in the Washington State Wine Competition. Click on the image for the link to his June 20 report on the return of the competition to the Yakima Valley.

More than 60 wineries combined to enter 311 wines in the Washington State Wine Competition, which now also serves as a fundraiser for the next generation of Washington winemakers. A portion of proceeds from the judging will help fund scholarships at Yakima Valley College, Washington State University, South Seattle College and Walla Walla Community College winemaking programs.

Yakima Valley Vintners, the retail label for the YVC winemaking program, earned two gold medals. College Cellars, the commercial piece of WWCC, was awarded a gold medal for its 2015 Clarke Vineyard Carménère – a living tribute to the late Stan Clarke, a Renaissance figure from the Yakima Valley and mentor to many future winemakers as an instructor at WWCC.

From 1980 through 2015, the judging was operated by the Central Washington State Fair in Yakima. Fair officials discontinued the judging when longtime competition director Ruth Anglin retired.

The state’s wine competition is now operated by Great Northwest Wine, a media company based in Richland, Wash., via an agreement with the Central Washington State Fair. The judging was staged June 20 on the Yakima Valley College campus in Grandview. 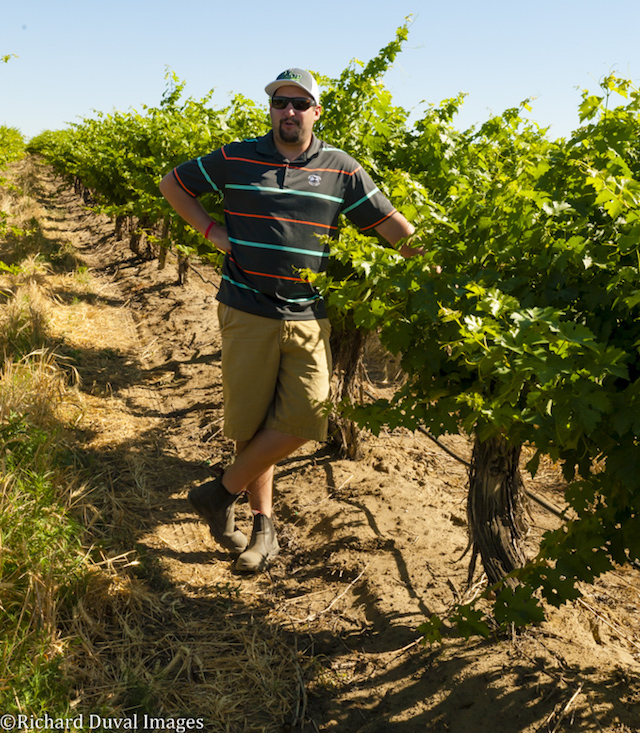 Maryhill’s first commercial vintage was 2001, and the Leutholds produced a rosé during that inaugural crush using Cabernet Sauvignon. They shifted to Cabernet Franc for the next three vintages.

In 2005, they transitioned to Sangiovese and remain convinced. Leuthold said Rob Griffin’s work with the Italian grape inspired him to focus his rosé efforts on Sangiovese. Barnard Griffin in Richland has won a gold medal or better 10 out of past 11 years at nation’s largest wine judging – the San Francisco Chronicle.

“Sangiovese has that natural acidity and as a rosé offers that fresh strawberry flavor to it,” Leuthold said. “The residual sugar gets you on the front, and the acid makes it finish nice and dry. From my perspective, it brings the perfect balance that the consumer is looking for in that type of wine.”

Maryhill produced 5,600 cases of the 2016 Rosé of Sangiovese ($16), an increase of about 2,000 cases from the previous vintage. Maryhill’s total production, which includes its small-lot vineyard-designated series, tops out at around 75,000 cases. Wine Press Northwest magazine named Maryhill its 2015 Pacific Northwest Winery of the Year.

“The economics of growing Sangiovese for a rosé make sense,” Leuthold said. “It’s naturally a high-yielding grape, so it makes for high gallons per ton. The clusters are large and so are the individual grapes. From a winery perspective, it helps with the math.”

Leuthold, who is opening a second tasting room this fall at Kendall Yards in his hometown of Spokane, said while Sangiovese rosé is a remarkably versatile food-pairing wine, he keeps it simple.

“With the rose, I’m more than likely going to have it with extra sharp cheddar cheese and Wheat Thins,” Leuthold said. The proud Washington State University product added, “If I can find it, I’ll have the rosé with Cougar Gold. My problem is that when I open a tin of it for a group on a special occasion, it’s just gone.” 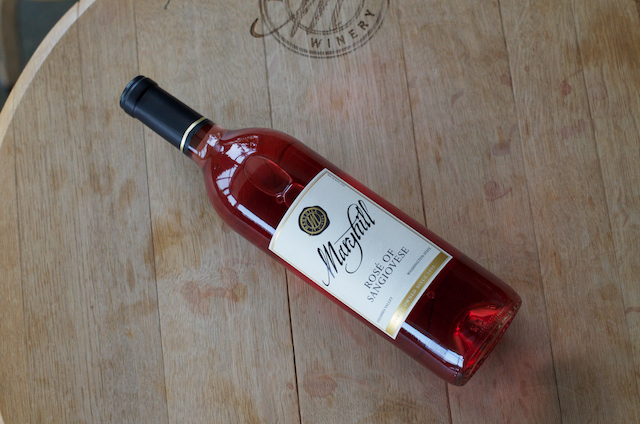 Maryhill Winery’s 2016 Rosé of Sangiovese was voted by a panel of 11 winemakers, growers, educators and writers as best of show at the 2017 Washington State Wine Competition. (Photo courtesy of Maryhill Winery)