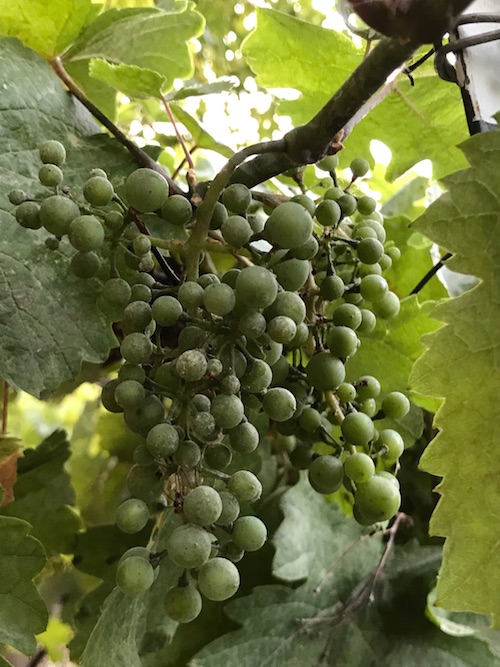 Riesling grapes in a Columbia Valley vineyard begin to mature in the mid-summer heat. (Photo by Melissa Perdue/Great Northwest Wine)

After four straight years of record wine grape crops in Washington, growers expect the 2017 vintage to be down by as much as 10 percent.

And early signs of veraison – when grapes start changing color – have started showing up right on time in vineyards, meaning harvest is on track to start in early September.

“Our last estimate is down a bit, though we have plenty of crop out there,” said Kevin Corliss, vice president of vineyards for Ste. Michelle Wine Estates.

Corliss indicated estimates put this grape crop down by as much as 10 percent over last year’s record harvest of 270,000 tons. As Ste. Michelle Wine Estates uses two out of every three grapes grown in Washington, its estimates have proven to be a good barometer for how the crop will look for the entire state.

Based on that educated prediction, the 2017 crop could drop below 200,000 tons for the first time since 2012, when the harvest weighed in at 188,000 tons. This possible decrease takes into account any new acreage coming into production this fall.

As far as the weather has been and how it will affect the 2017 vintage, the heat has been almost exactly on track for the long-term average, according to Washington State University’s Irrigated Agriculture Research and Extension Center in the Yakima Valley town of Prosser.

As expected, the warmest area of Washington wine country is Red Mountain, traditionally considered the hottest area in the Columbia Valley.

Corliss said this past winter’s especially harsh weather doesn’t appear to have caused much damage in the Columbia Valley. He has received scattered reports in the Horse Heaven Hills near Paterson and in the Walla Walla Valley of winter damage to Syrah, which means fewer clusters on the vines or clusters that are shattered and simply have fewer grapes than usual.

What was startling to him, however, were reports of color showing up in Cabernet Sauvignon in late July.

“This is a little earlier than expected,” Corliss told Great Northwest Wine. “I didn’t expect to see anything in Cab until next week (early August).”

Based on this, Corliss anticipates harvest could get into full swing soon after Labor Day – sooner for sparkling wines, which are picked earlier to retain their all-important acidity.

With the typical intense summer heat in July and August ripening the grapes, Wolfe also expects harvest to start in early to mid-September. He noted obvious winter damage, especially in Bordeaux varieties such as Merlot and Cabernet.

“I think it won’t be another record crop,” Wolfe said. “It’s going to be an average-sized crop.”