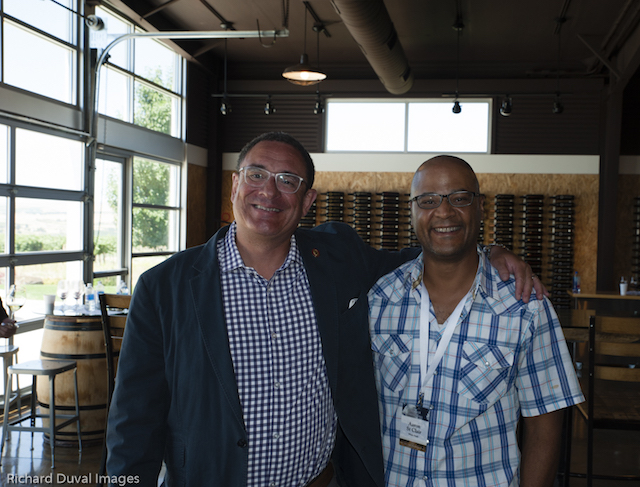 BENTON CITY, Wash. – Red Mountain continues to grow its fan base in Washington state for Cabernet Sauvignon, but these growers and winemakers hope the second annual Cabernet Summit will build the thirst for their wines beyond the Pacific Northwest.

“My big takeaway, because I was super unfamiliar with the region, was how well these wines stand up against the classic areas of the world,” St. Clair told Great Northwest Wine. “I really feel like I’m under-representing Washington state. I’m going to go back, look what we’re approved for and really start moving some things in. I’m overwhelmed by what I’ve tasted.”

Joining him on the fam tour was a group that included Norman Acosta, sommelier at Rivea by Alain Ducasse in Las Vegas; Phil Bilodeau, owner of Thief Wine Shop and Bar in Milwaukee, Wisc.; Eric Denq, sommelier/cellarmaster at Wolfgang Puck’s Spago/Beverly Hills, and Gerald Morgan, sommelier/owner of Buon Vino, a wine concierge service in Plano, Texas.

Last year’s Cabernet Summit served as a template to provide insight about the styles of Cab coming off Red Mountain, wines built for the dining table, the cellar and the collector. Producers on Red Mountain hope the latest visitors will bang the drum and spread the word for Washington’s smallest AVA.

“These people are learning and understanding what we are doing here, and after this trip, they seem to be excited about what we are doing,” said Col Solare winemaker Darel Allwine. “And I love it. To interact with the trade and the other winemakers involved here to understand what they are doing, it’s fun.” 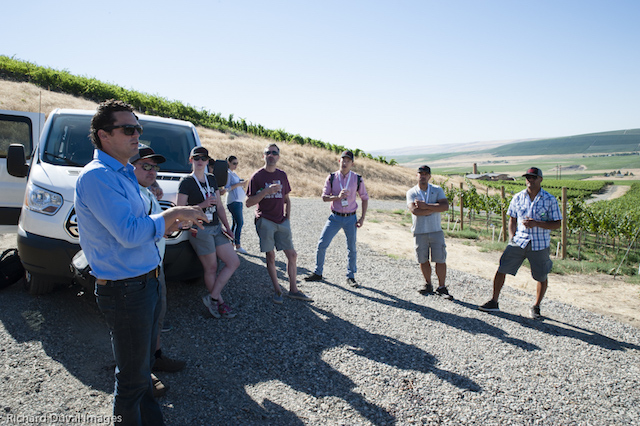 Brian Rudin, winemaker for Duckhorn Vineyards’ Canvasback project in Washington state, leads members of the wine trade on a tour of vineyards on Red Mountain as part of the second annual Cabernet Summit. (Photo by Richard Duval Images)

The Washington State Wine Commission launched the consumer-focused Taste Washington in 1998, but several years ago it handed the reins to Visit Seattle. The collaboration has made it the largest consumer event of its kind in the country.

At the same time, the wine commission shifted its focus and steered marketing efforts toward bringing in media, wine buyers and sommeliers to help share the industry’s stories and wines. A few years ago, Red Mountain began reevaluating its approach.

“We’re not abandoning consumers by any means, but we figure this is the best way to manage our resources,” said Tim Hightower, co-owner/co-winemaker of Hightower Cellars and president of the Red Mountain AVA Alliance. “There are a lot of people who like to come to Red Mountain and buy wine out of the tasting rooms, and that’s the higher-margin sale for us, but a direct-to-consumer marketing campaign across the nation would cost way too much.”

And yet, consumers continue to support the tasting rooms on Red Mountain, including Col Solare.

“It’s been very busy up here on Friday, Saturday and Sunday,” Allwine said. “There have been some pretty good crowds coming through our tasting room.” 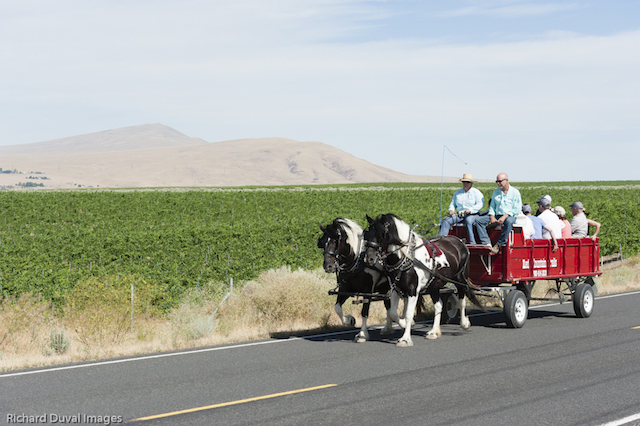 Members of the second annual Cabernet Summit pile in for a wagon ride with Red Mountain Trails. (Photo by Richard Duval Images)

“The goal is to build advocates within the trade who tell the story to consumers and broaden your reach,” Pennington continued. “There are a couple of trade tastings in Seattle and Portland every year. There’s the new Growers’ Tasting (in February) and there also was a version of that on the west side. Both of those are educational opportunities for the industry and growers who have fruit to sell.”

“We’re not shy about saying that we ripped it off, but we let them know we were going to rip it off,” Pennington chuckled. “Overall, we’re happy with where we’re at. We just need to keep doing these things and getting better.” 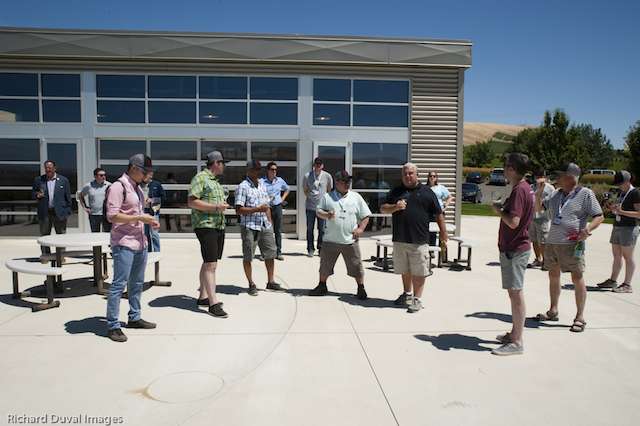 Charlie Hoppes leads the Cabernet Summit on a tour of Fidelitas on July 11, 2017 in Benton City, Wash. (Photo by Richard Duval Images)

At the Cabernet Summit, education was a key component. Among the topics geologist Kevin Pogue touched on during his presentation to the wine buyers is that Red Mountain is a sub-AVA of the Yakima Valley and the wines could also be labeled as “Columbia Valley.”

Kelly Hightower, Tim’s wife, is president of Wine Yakima Valley. When asked if there are conflicts between them, both Tim and Kelly laughed rather heartily.

And Hightower Cellars’ support of both organizations benefits their brand.

“Wine Yakima Valley has a lot more direct-to-consumer events that they’ve been doing for years,” Tim Hightower said. “That’s one of the reasons we’re a part of that organization. And being a member of Red Mountain allows (Hightower Cellars) to do different things – like this.”

Pennington’s perspective is valuable, in part because of his years at the wine commission handling communications and marketing. In 2008, the commission launched its statewide Road Trip, an annual weeklong fam that brings in 40 to 60 members of the wine trade from around the continent.

“Here, we’re targeting roughly 10 people a year for now, and we’ll look to grow it over time,” Pennington said.

Most of the folks on both the Road Trip and Cabernet Summit are from outside the region and on-premise. 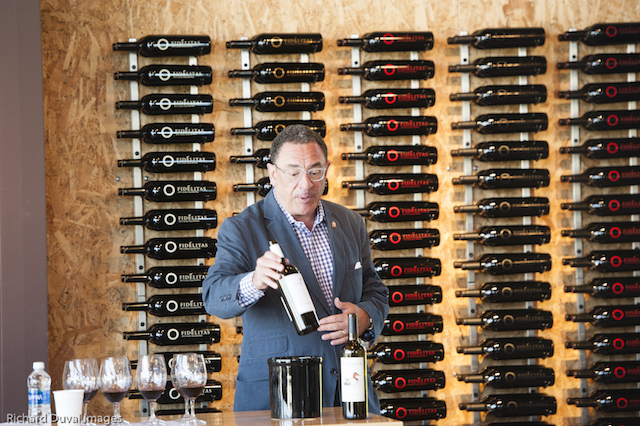 The Cabernet Summit began on a Sunday afternoon with a Champagne reception, dinner and petanque at historic Hedges Family Estate. It culminated on Tuesday with a wine-pairing dinner catered by Angela Kora’s Ethos Group in Richland and staged at Col Solare. Winemakers, growers and principals sat among their guests in long table style dining al fresco under a Chamber of Commerce night.

In between, the itinerary was filled with visits to wineries, vineyard tours, group meals and two technical tastings with Thomas Price, a Master Sommelier with Jackson Family Fine Wines. His second tasting pitted Red Mountain vs. the world.

“There were four of each, and we set them up in pairs of two,” Pennington said. “It helps you structure the discussion as opposed to saying, ‘OK, taste through all eight of these wines and we’ll discuss.’ ”

The smackdown included Chateau Palmer’s Alter Ego, an $80 wine from Bordeaux; Ornellaia, a prized Super Tuscan founded by Antinori and shepherded by Robert Mondavi; a $120 Cab from famed Australian producer Penfolds, and a Cab from Chappellet in Napa. It gave these buyers and somms the opportunity to learn more about Red Mountain’s tannin management, extraction and style. It wasn’t meant to be a Judgment of Paris, but it was rather eye-opening for a few of the guests.

“The comparative tasting was just really, really cool,” St. Clair said. “We had some world-class wines. When I tasted the Chappellet vs. the Canvasback, it just blew my mind. Great value. Beautiful.”

Price earned praise for his presentations.

That blind tasting also seemed to point out that Red Mountain wines aren’t necessarily bigger or more tannic than some of those from famous international producers.

“For me, they are Old World with a little more fruit and a little more body,” St. Clair said. “It might be the sagebrush, but there is something that makes these wines unique, super expressive of the region and just wonderful.” 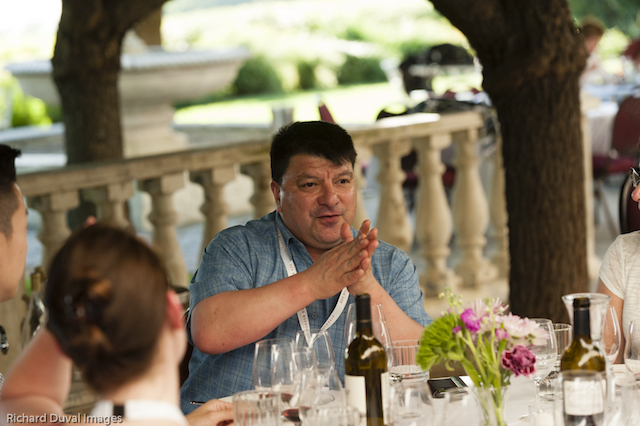 Not only did these wine professionals get to walk the vineyards, but they also spent time with acclaimed growers Dick Boushey and Marshall Edwards.

“They have been asking a lot of sophisticated questions,” Allwine said. “They want to know about the evolution of Red Mountain, where we are going from here, and the Cabernet especially. That’s where their focus is. We are giving them the opportunity to understand the wines, especially with that comparative tasting.”

Those experiences and knowledge will make it easier for the attendees to describe and promote Red Mountain wines to their clients.

“We have such a diverse customer base,” St. Clair said. “People are willing to try things. And the average $40 bottle price is what that I heard, with some bottles moving up to $70 and $80. I think there is definitely a market. The big challenge in California is that people love California wines. They are used to that rich, opulent, over-extracted, over-oaked big (wine). It’s not until you expose them to different things do they really understand. And it takes some repetition.”

There’s also value in having a few Northwest buyers on these tours. This junket included John Allen, co-founder/sales manager of Vino! in Spokane; Erin Kelly of Salty’s Waterfront Seafood Grills in Seattle and Portland; Dan McGarry, sommelier at Wild Ginger in the Seattle area, and the affable Lenny Rede, a storied chef, wine judge and buyer in Seattle who works for Esquin Wine & Spirits and also serves as an instructor at South Seattle College.

“I’m the biggest cheerleader, and they all know that,” Rede said. “They’ve got a ringer in me. It’s one big family for me, and the weather was perfect. It’s also a good refresher for people like me to come back because I haven’t seen the new Quintessence blocks and all the Aquilini plantings.”

The technical tastings also made an impression on Kelly.

“The most exciting thing for me was to taste with Thomas Price, the Master Somm, and the winemakers and my peers,” she said. “It was very, very eye-opening to see the quality that’s being produced out here vs. the classics that you think are always going to be amazing. In truth, Red Mountain outshined a couple of those today.” 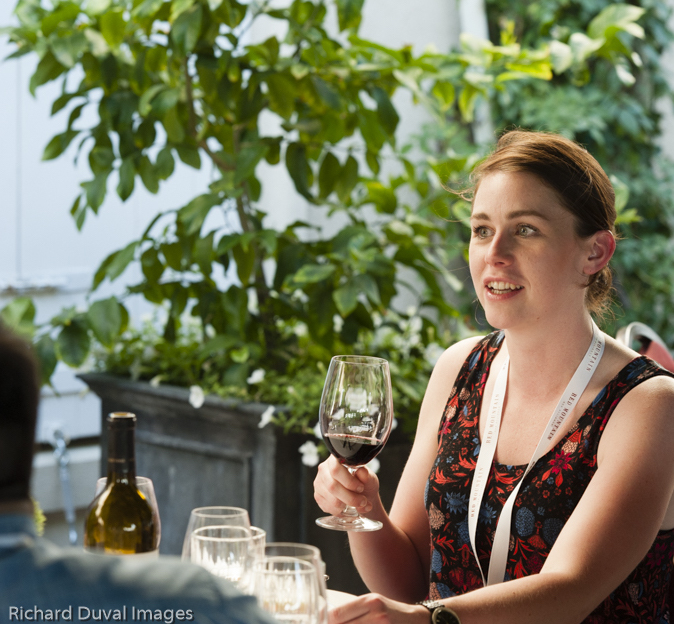 These visitors appreciated the contrasting styles, too.

“Hedges is a lot more Old World in taste compared to the rest, and then you’ve got Brian making some interesting, delicate and elegant wines for Duckhorn, which is based in Napa,” Kelly said. “It’s a melting pot of different styles, and those styles are still evolving, which is very exciting and it’s different.”

“The Cabs get their space because of the worldwide demand for it, but the Syrahs from here are every bit as gorgeous as the Cabs. Very distinctive,” Allen said. “And to have a Master Sommelier come in and help us compare the wines — and to see them play out as well as they did — was phenomenal.

“Now we have ambassadors going to Milwaukee, going to Dallas, going to Las Vegas, going to California,” Allen added. “This was a smart thing to do. It’s another testament of Washington’s ability to create world-class wine. They stand shoulder-to-shoulder with the big boys.”

St. Clair, who graduated with a science degree from the Air Force Academy before receiving an MBA from Ohio State, enjoyed learning about the family histories and got a sense for the camaraderie among the properties large and small, nascent and historic. It was the pioneering team at Hedges Family Estate who nominated St. Clair for this Cabernet Summit, which also served to showcase The Lodge at Columbia Point, a new wine-themed luxury hotel overlooking the Columbia River in nearby Richland.

“It seems like everyone gets together really well,” St. Clair said. “Some of the new kids on the block seem a bit controversial, but they seem to have their head in the right place. Overall, I’m blown away by the wine, the hospitality, the structures, the land, the entire region. It really, really surprised me, and I’m really happy I came up.

“The people were so great and so nice — and California gets a little pretentious sometimes,” he added with a chuckle.