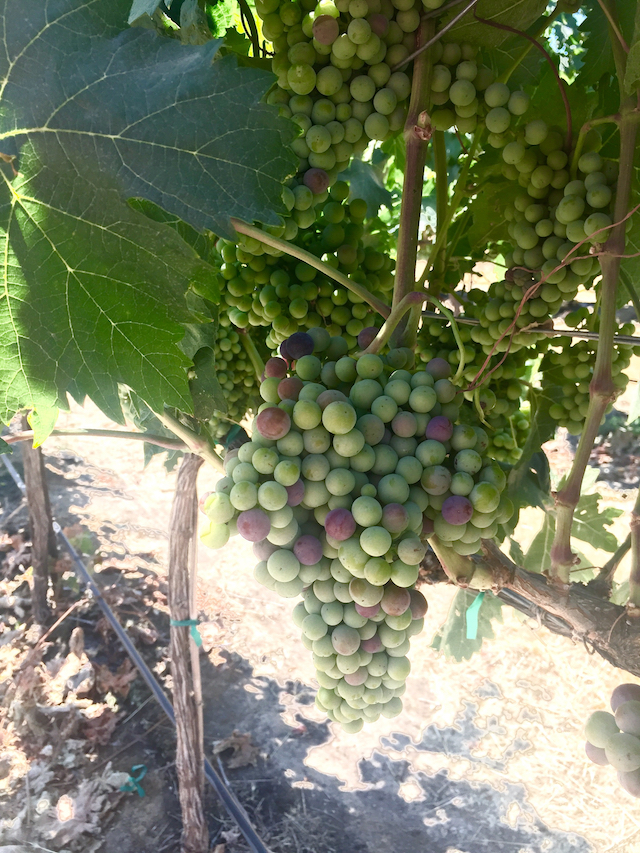 A cluster of Tempranillo grapes enters veraison at Canyon Ranch Vineyard near the town of Prosser in Washington’s Yakima Valley on July 28, 2017. (Photo by Richard Duval Images)

JACKSONVILLE, Ore. — Pacific Northwest vineyards for the wine industry are ripening along the lines of a moderate vintage after the growing degrees that were gains during the month of July, according to acclaimed climate researcher Greg Jones.

The 2012 vintage continues to be appreciated in the Pacific Northwest for its wines, particularly coming off the cool vintages of 2010 and 2011.

“Clearly, 2012 was much more balanced than ’10 and ’11 and ’15 and ’16,” Jones told Great Northwest Wine on Sunday at the Oregon Wine Competition in Jacksonville. “We could end up somewhere like ’12 – and the conditions are looking similar. We had a relatively cool spring in 2012, and it’s moved into a fairly hot period just like then. And there really isn’t anything on the horizon that would allow us to expect some kind of variability that would drive us to early rains.”

And while the 2017 vintage got off to a cool start, those growing degree days should continue to track above those from more than three decades ago.

“Entering the months when heat accumulation is at its greatest, departures from normal for January-July are now near the 1981-2010 average in Washington and Idaho, about 10-15% above average in Oregon, and 10-20% above average in California,” he wrote.

“I am continuing my overall viewpoint that the 90-day forecast for the western U.S. wine regions will hold to normal to moderately warmer than normal summer into fall temperatures,” Jones wrote.

It was the final weather and climate summary that Jones is scheduled to issue as professor of environmental science and policy at Southern Oregon University. On Aug. 15, he leaves the Ashland school to assume the role as director of the wine education at Linfield College in the Willamette Valley town of McMinnville. 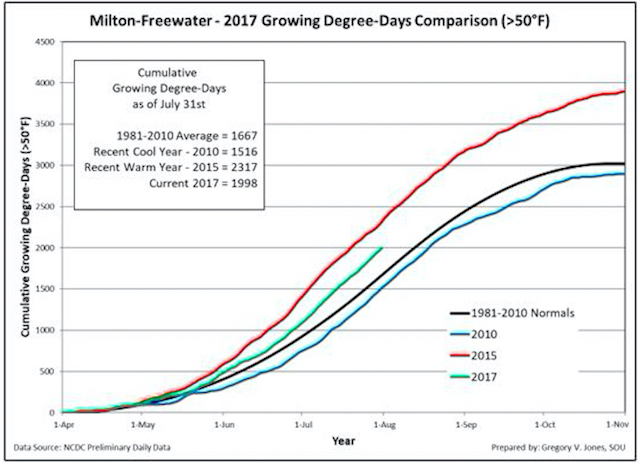 Growing degree day accumulations for weather reporting stations in the Walla Walla Valley, the Willamette Valley, the Umpqua Valley and Rogue Valley are behind the hot vintage of 2015 but well ahead of the 1981-2010 average. (Data from the NOAA National Centers for Environmental Information/Charts by Greg Jones, Southern Oregon University) 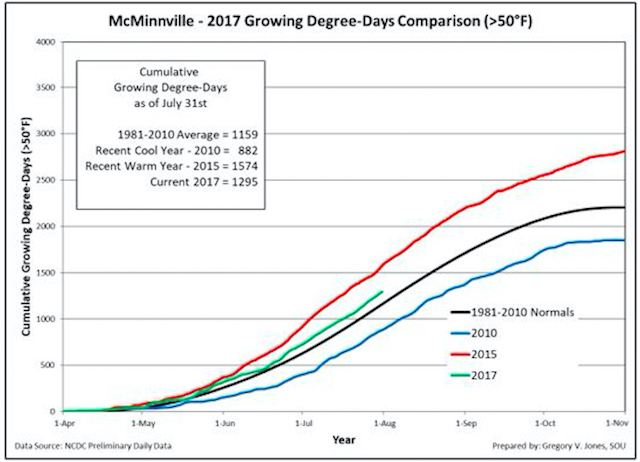 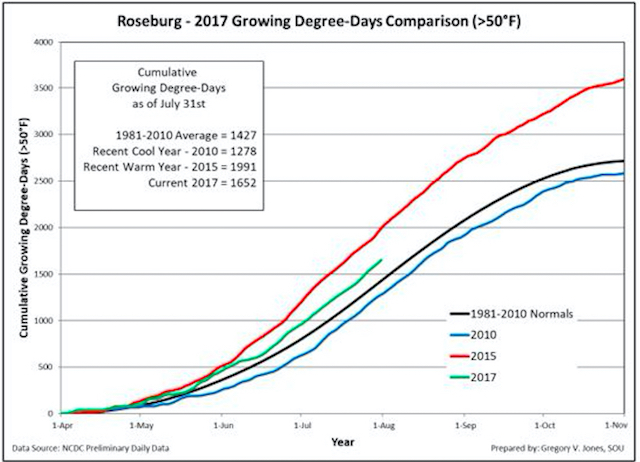 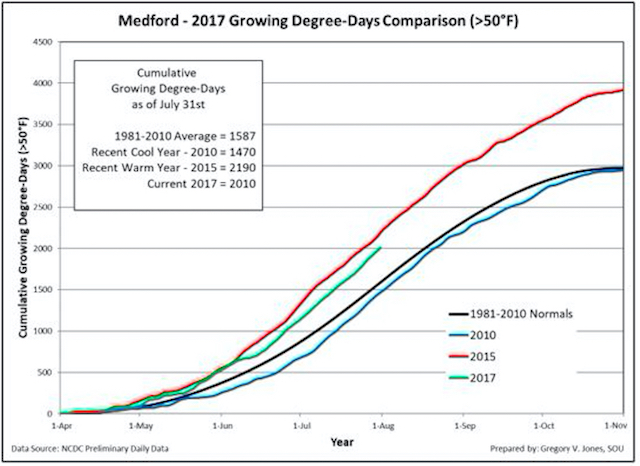 Through July 31, there were 2,003 growing degrees days recorded at the Wahluke Slope station. A year ago, it charted 2,172 GDD.

This year, Jones’ weather station in Milton-Freewater, Ore., which serves as a measurement of the Walla Walla Valley, recorded 1,998, GDD through July 31.

“This region is seven days behind 2015, and the Umpqua is about 11 days behind,” Jones said. “The Willamette Valley is 13 days behind, and the Milton-Freewater area is about 14-15 days behind, but if you look at how it compares to the long-term average, we’re still ahead.” 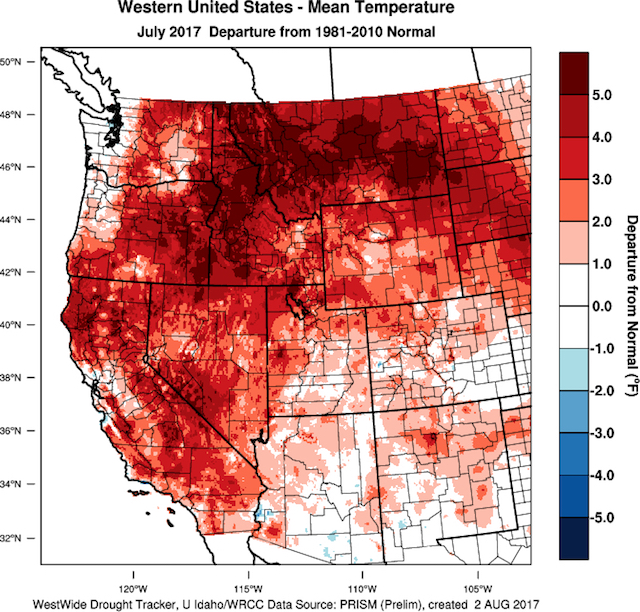 This chart of the West Coast of the United States reflects the temperature departure from normal for July 2017. (Image from the WestWide Drought Tracker, Western Region Climate Center and University of Idaho/courtesy of Greg Jones)

Recent scorching temperatures In the Pacific Northwest, which Jones described as “one of the most extreme heat waves in decades” and tinder-dry conditions have sparked a litany of wildfires in British Columbia and summer winds have brought dense smoke down into Washington and Oregon.

There have been scattered reports of smoke taint in wine from the Pacific Northwest during the past decade, and growers and winemakers don’t seem overly concerned yet.

“We’re still kind of hanging in there in terms of the overall impact,” Jones told Great Northwest Wine. “Plus, we’re still two or three weeks away from the point at which smoke supposedly has the most influence. You can’t write it off because we’ve still got a long way to go.

“And the conditions that are making it warm and dry are what’s going to keep the smoke here,” Jones added. “We actually need some mixing of the air, a low-pressure system to come through. There are some things out there on the horizon that might do that.”

Jones pointed out that many stations in Northwest recorded no rainfall, and look for a continuation for the second week of August.

“The current heat wave in the western U.S. appears to be holding through this forecast period, albeit not as extreme as the first few days of the month,” Jones wrote. “Some fluctuation in onshore vs. offshore flow will give short-term relief, but the majority of the western U.S. is forecast to stay much above normal (5-15 degrees), although smoke from fires through the west, including Canada, might tamp down the temperatures a couple of degrees.” 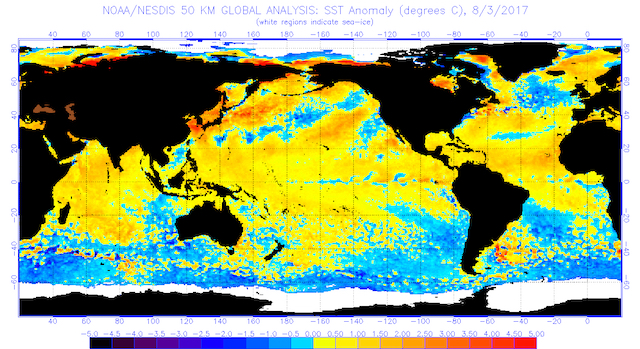 Climate researchers look to the Pacific Ocean to formulate forecasts for this fall and winter. At this point, Jones said the water temperatures show an El Niño/Southern Oscillation-neutral pattern and that “nearly all models indicate that if El Niño does form, it is likely to be weak.”

“Statistically, neutral conditions in the tropics would slightly favor the next few months to be warm and dry across the southern half of the US; wet and cool the further north one goes into Canada,” Jones added.

“There is some indication that western Washington and some of the PNW will stay drier than normal into the fall,” he wrote. “For the western U.S., I see all evidence pointing to seasonally dry conditions that will likely give way to a fairly normal start to the fall rainy season.”