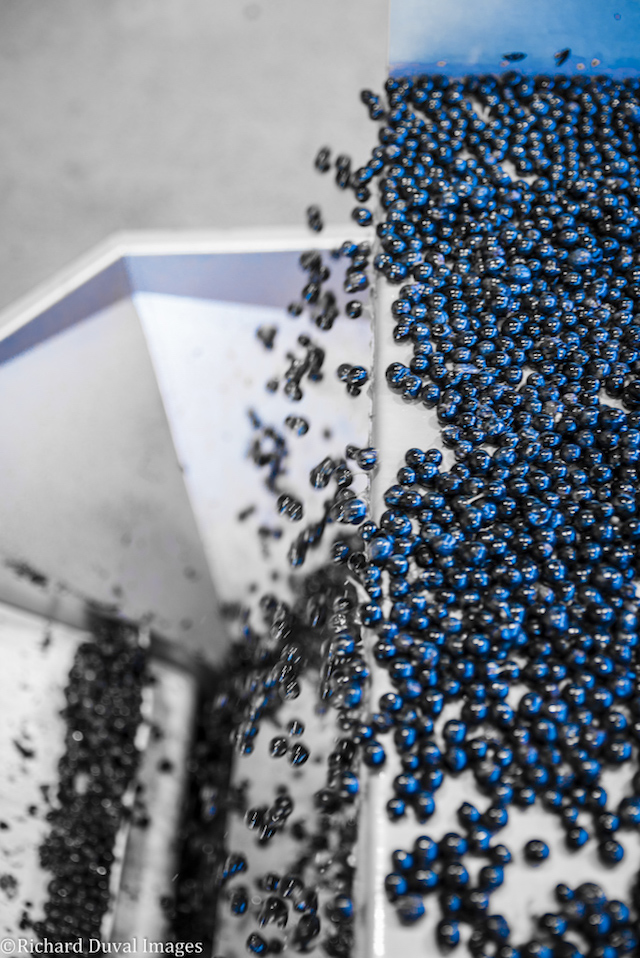 Clean and ripe grapes could be mistaken for black currants or blueberries as they take another step toward their transformation into wine at Tranche Cellars in Walla Walla, Wash. (Photo by Richard Duval Images)

During the past four decades, the Walla Walla Valley has a well earned reputation as a top producer of red wines.

It’s a curious development because the region isn’t particularly well-suited for growing red wine grapes. In fact, it isn’t much warmer than the Yakima Valley, which is well known for growing white wine grapes. And because of the Blue Mountains, more rain falls in the Walla Walla Valley than just about anywhere else in the vast and arid Columbia Valley.

So why all the red wine? It has more to do with the pioneers. Leonetti Cellar is the oldest producer in the valley and made its reputation on red wine, particularly Cabernet Sauvignon. That was followed by Woodward Canyon Winery, which in 1990 earned Washington’s first top 10 wine on Wine Spectator magazine’s annual top 100 wines of the world with the 1987 Cabernet Sauvignon. Later came wineries such as L’Ecole No. 41, Pepper Bridge and Walla Walla Vintners, all wineries with reputations built on red wine.

Today, of the 2,800 acres planted in the Walla Walla Valley, fully 95 perfect is planted to red wine varieties, leading with Cabernet Sauvignon, Merlot, Syrah and Cabernet Franc. With the expectation of every new winery in the valley to produce stellar reds, don’t expect the red-to-white ratio to dramatically shift in the near future.

Here are 12 red wines made from Walla Walla Valley grapes that we have tasted in recent weeks. Ask for them at your favorite wine shop or contact the wineries directly.