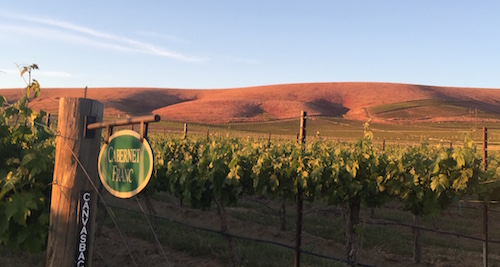 Red Mountain rises above Canvasback Vineyard. The ridge at the eastern end of the Yakima Valley is famous for Cabernet Sauvignon. (Photo by Niranjana Perdue/Great Northwest Wine)

Red Mountain, a little hill on the eastern edge of Washington’s Yakima Valley has fast become the premiere location for growing red wine grapes in Washington (sorry Walla Walla). At just 4,040 acres, it is Washington’s smallest American Viticultural Area, and it’s the third smallest in the entire Pacific Northwest (after Ribbon Ridge in Oregon’s Willamette Valley at 3,350 acres and The Rocks District of Milton-Freewater at 3,770).

It’s sort of a funny place because it isn’t red – it’s brown – and it isn’t a mountain by any definition – it’s more of a ridge or benchland with the Yakima River running below it. Yet it’s home to some of the state’s most famous vineyards, including Ciel du Cheval, Klipsun, Heart of the Hill, Kiona and others.

It could be said that Red Mountain is not unlike Oakville, the famous grape-growing district in Napa Valley. It’s the same size, known for Cabernet Sauvignon, and without rival for quality.

Red Mountain – so named because the cheat grass on its slopes turns red each spring – is more than half covered in vines – making it more green than red – and more than half the acreage is Cabernet Sauvignon, followed by Merlot, Syrah and Malbec. The first vines planted were in 1976, before irrigation and electricity arrived. Recently, outside investors have jumped at the opportunity to be a part of Red Mountain.

Here are 12 examples of wines made from Red Mountain grapes we’ve tasted in recent weeks. Ask for them at your favorite wine shop or contact the wineries directly.