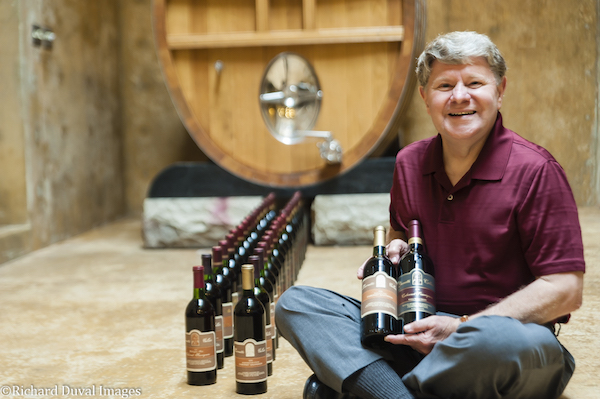 Hank Sauer of Kennewick sits with a complete vertical of Cabernet Sauvignon from Leonetti Cellar, a collection he and his wife, Nancy, donated to the Auction of Washington Wines in order to establish a scholarship at Washington State University for field workers’ children. The lot generated $32,500 on Saturday, Aug. 19, 2017. (Photo by Richard Duval Images)

WOODINVILLE, Wash. — The 30th annual Auction of Washington Wines set a record with $4.19 million raised, and Saturday was a prideful evening for Washington State University students past, present and future.

News of the Wine Spectator Scholarship Foundation, a $1 million donation to WSU’s viticulture and enology program, came the night before during the 50th anniversary celebration for Chateau Ste. Michelle.

However, Saturday night during the Gala for the Auction of Washington Wines, a couple of WSU alums from Kennewick — retired educators Hank and Nancy Sauer — cheered as their donated vertical of Cabernet Sauvignon by iconic Leonetti Cellar sold for $32,500. It went in the history books as the weekend’s most coveted wine lot.

“It was just a wonderful time with a lot of nice, wonderful people, and the evening was topped off by reaching this goal to endow a scholarship for field workers’ kids,” Hank Sauer told Great Northwest Wine. “That’s what it’s all about for Nancy and me.”

Thanks to the donations by the Sauers and the world’s most respected wine publication, this year’s total raised through the Auction of Washington Wines eclipsed last year’s record of $3.5 million earmarked for Seattle Children’s Hospital and WSU’s V&E program.

Last year, the Auction of Washington Wines ranked as the fourth-largest charity wine auction in the United States. As a result of this month, the auction has raised more than $41 million since Allen Shoup, then-CEO of Ste. Michelle Wine Estates, launched the event in 1998. 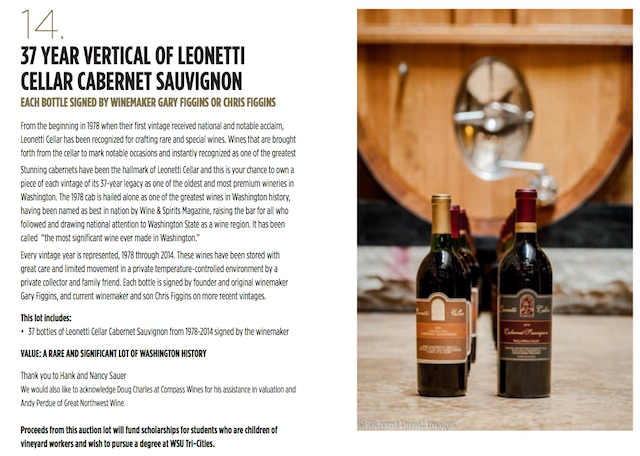 The 37-bottle collection of Cabernet Sauvignon produced by Leonetti Cellar was donated by Hank and Nancy Sauer of Kennewick, Wash. (Image courtesy of the Auction of Washington Wines)

There also was the fun buzz surrounding the Leonetti vertical, a lot that was teased at the start of the evening and built anticipation as more than two dozen items came up for bid.

The Sauers met in Pullman as college students, graduated from WSU in 1970 with teaching degrees and served for decades as educators in the Kennewick School District. Hank grew up in Walla Walla as a childhood chum of Gary Figgins, who went on to create Leonetti Cellar and help make their hometown famous worldwide for wine.

Hank and Nancy began drinking wine in 1969, and they were early supporters of Figgins, buying multiple samples of every Leonetti wine produced from each vintage. That collection includes arguably the most important bottle of wine in the history of Washington wine industry, the 1978 Cabernet Sauvignon that earned Food and Wine magazine’s top wine for 1981.

“I can guarantee you that bottle of ’78 has not seen daylight in 30 years,” Hank said.

“Gary and I got on stage, and it was overwhelming,” Hank said. “The reception was really warm.”

The Sauers were especially pleased when the bidding passed the $25,000 mark.

“The scholarship became endowed at $25,000, so anything over that and you can start spending money on scholarships,” Hank said. “That means $7,500 can start going to field workers’ kids right way.”

A couple from the Seattle area won the bidding that the Sauers estimated said lasted about five minutes.

“We all went over and thanked the couple for investing in the future of those kids,” Hank said. 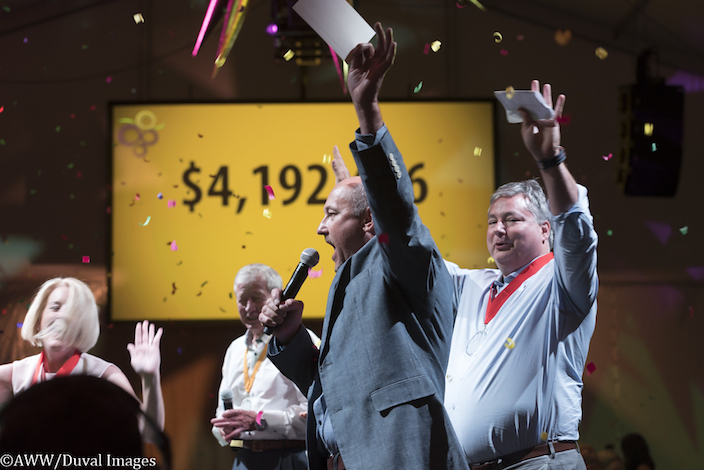 Jean-François Pellet, founding winemaker of Pepper Bridge Winery and Amavi Cellars in Walla Walla, yells into the microphone after the record total of fundraising is announced at the close of the 2017 Auction of Washington Wines. (Photo by Richard Duval Images)

Among those who went out of their way to congratulate the Sauers and thank them for their generosity were Ted Baseler, CEO of Ste. Michelle Wine Estates; Juan Muñoz Oca, head winemaker for Columbia Crest; Marty Clubb, co-owner and director of winemaking for L’Ecole No. 41; Rick Small, co-owner/founding winemaker of Woodward Canyon Winery; acclaimed grower Dick Boushey, Cayuse founding winemaker Christophe Baron and WSU President Kirk Schulz.

“It was nice to meet the new president, but I would rather be on the sidelines or in the backroom,” Hank said.

However, it helped sharing the stage with his friend of more than 50 years.

“When Gary and I get together we instantly go back to childhood,” Hank said. “We’re not adults when we get together.”

There’s a chance they could meet in Woodinville later this decade because the Sauers have more wine stored off-site. Within it is a collection of Leonetti that includes complete verticals of Merlot, Sangiovese and the Reserve.

“Maybe next year they will do one of the others. It’s not as if the stuff is going bad,” Hank said with a chuckle. “Now that the scholarship is established, the more money they have, the more that can be given to field workers’ kids.”

The Sauers also found delight in the college spirit that surrounded them Saturday night.

“There was a real difference between Cougars and Huskies in the room,” Hank said. “You could hardly hear anyone pay any attention when there was a mention of a Husky, but as soon as someone said, ‘Cougars,’ the place went nuts!” 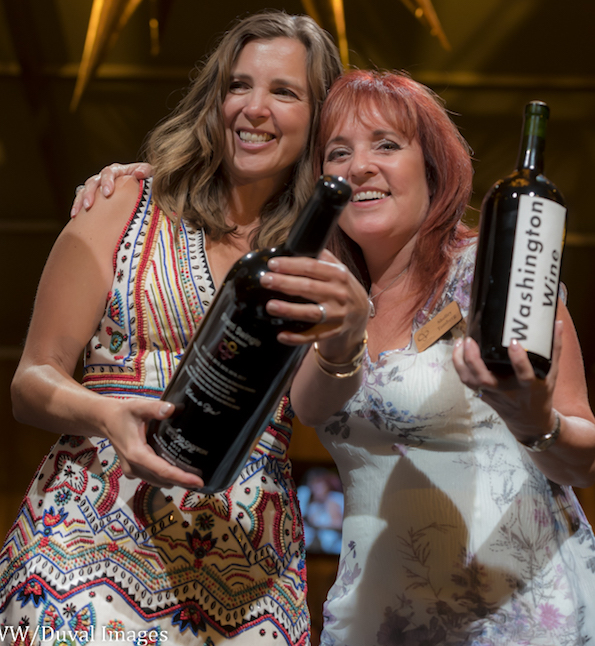 Sherri Swingle, left, leaves the Auction of Washington Wines on a high note after seven years of service. Shelley Tomberg, right, succeeds her as executive director of the 30-year event. (Photo by Richard Duval Images)

A bittersweet component to the weekend was that it served as the swansong for Sherri Swingle, executive director for the Auction of Washington Wines. The mother of two young boys spent seven years in the role, and she now hands off the auction to Shelley Tomberg, formerly of Columbia Hospitality.

Other highlights from the three days of fundraising included: