McMINNVILLE, Ore. – This corner of the United States could use a long cooling rain to drown the scores of wildlife raging on both sides of the Cascades and creating a smoky veil around Pacific Northwest vineyards.

Unfortunately, there’s no substantial relief in sight, according to climate researcher Greg Jones.

“Current conditions favor continued warmer than average and drier than average conditions in September throughout the western U.S.,” Jones wrote in his latest Weather and Climate Summary and Forecast for the Northwest wine industry. “The extended forecast calls for much of the same, and there’s no indication at this point for anything other than a typical fall transition.”

The report, released late Wednesday, marked the first by Jones in his new role as director for Linfield College’s Center of Wine Education and professor of environmental studies. He spent the past 20 years as a professor, researcher and administrator at Southern Oregon University in Ashland.

“Heat and smoke were the signature for August 2017 in the western U.S.,” he wrote. “A total of 81 fires, spread across nine Western states, have burned more than 1.4 million acres to date. A hot, dry and unstable ridge of high pressure maintained its grip over the western U.S. during August – the result was multiple heat waves and a forecast that held true across the West.”

The precipitation map for August that Jones shared proves it.

“The majority of the West saw 20-75% of normal precipitation, although many stations in Washington, Oregon and California recorded no measurable rainfall resulting in less than 5% of normal,” Jones wrote. 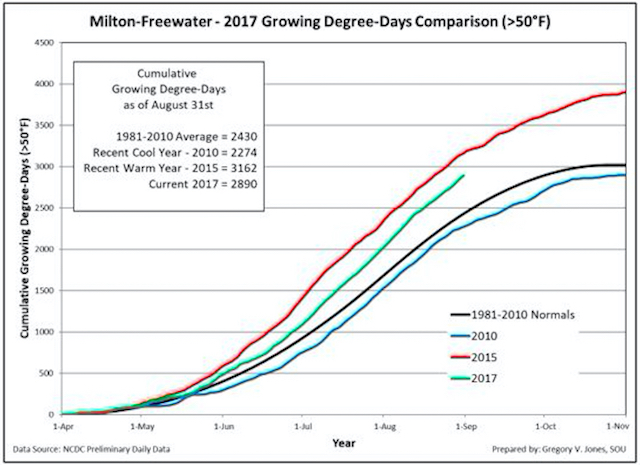 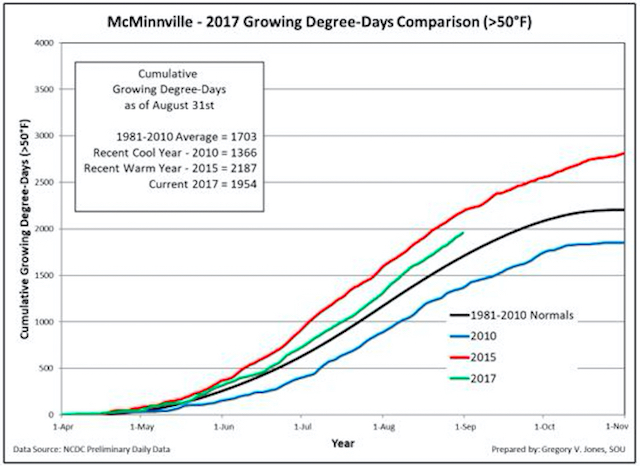 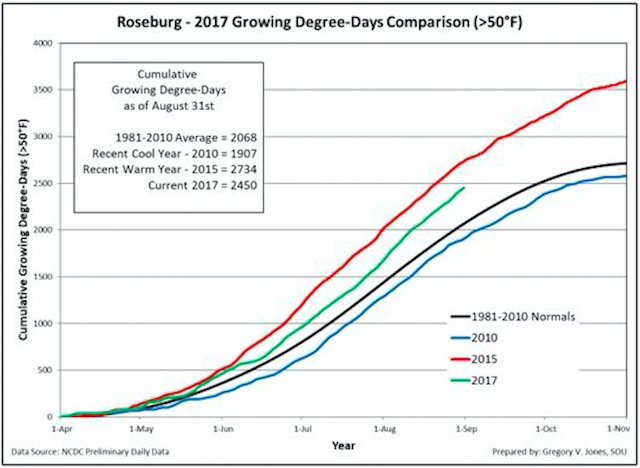 This year, Jones’ weather station in Milton-Freewater, Ore., which serves as a measurement of the Walla Walla Valley, recorded 2,890 GDD through Aug. 31. A year ago, it read 2,673.

In the heart of the Willamette Valley, Jones’ station checked in with 1,954 GDD. Last year, the McMinnville device stood at 2,059. The Roseburg weather monitor at Abacela notched 2,450 GDD, which was substantially off the 2016 computation of 2,568. In the Medford airport, the Rogue Valley station recorded 2,888 GDD, just trailing the 2,906 from 2016 report.

“This region is seven days behind 2015, and the Umpqua is about 11 days behind,” Jones said. “The Willamette Valley is 13 days behind, and the Milton-Freewater area is about 14-15 days behind, but if you look at how it compares to the long-term average, we’re still ahead.”

The month resulted in temperatures warmer than the 30-year average from 1981 to 2010, ranging from +2-6°F across Washington, Oregon, western Idaho, Montana and northern California.

Meanwhile, the eastern side of the Rockies reflects the weather for much of the rest of the country, which is cooler than normal.

“Year to date temperatures remain above average globally and for the U.S. as a whole,” Jones wrote. “The U.S. is currently the second-warmest on record for January-August.”

And yet, vineyards in Washington haven’t matched the growing degree days of the record-hot 2015 vintage because of the cold late winter and early spring. However, Oregon is +1.3°F warmer than average, with Idaho even a bit warmer (+1.9°F).

“Wine regions continue 5-20 days ahead of average, except a portion of eastern Oregon/Washington which is still 2-6 days behind,” Jones reported. “The 2017 heat accumulation to date in the western U.S. wine regions is now similar to 2013-14 and 2016.”

Research shows that sea-surface temperatures and conditions in the North Pacific recently are tracking similar to those experienced in the autumn months of 2015 and 2016, according to Jones.

“The continued warm conditions in SST in the North Pacific would enhance the likelihood that the western U.S. would see a warmer than average S-O-N,” he wrote. “Combined with no other climate variability components evident at this time, the Tropics and North Pacific are continuing to display conditions that would indicate that the warm and seasonably dry 30- and 90-day forecasts for the west are likely to hold.”

In the next week, however, there are indicators that a low pressure system from the south might push through and clear out the air in the Northwest. Relief in the form of rain appears minimal.

“Initial forecast runs for the month of September call for continued warm conditions with no indication of anything other than dry to seasonal for rainfall,” he wrote. “The precipitation forecast for August remains dry in the upper PNW, across the northern Rockies, and into the Plains.

“At this point there is nothing pointing to any dramatic shift from these conditions, and I am continuing my overall viewpoint that the western U.S. wine regions will hold to normal to moderately warmer than normal as we transition from late summer into fall and early winter,” he added.