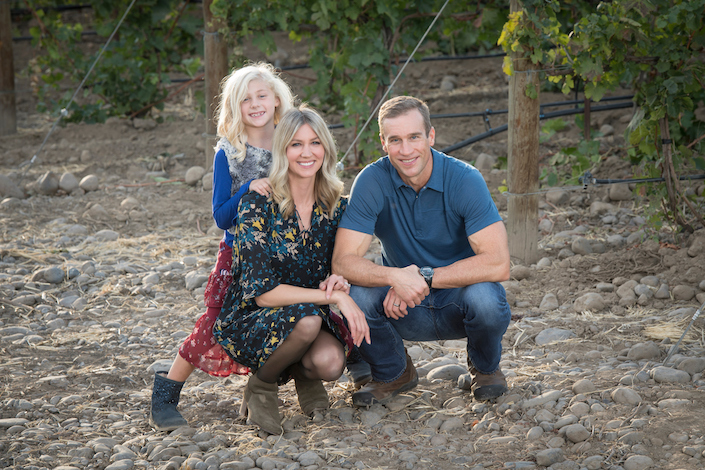 Jon Meuret moved his family and Maison Bleue Winery to Walla Walla, Wash., in 2012. This week, publicly traded Willamette Valley Vineyards announced that it has purchased the brand, allowing Meuret to focus on winemaking and viticulture for both Maison Bleue and the Oregon company’s young Pambrun Wines project. (Photo by Andréa Johnson Photography/courtesy of Willamette Valley Vineyards)

WALLA WALLA, Wash. — Willamette Valley Vineyards has deepened its relationship with Jon Meuret by purchasing the winemaker’s acclaimed Maison Bleue Winery and dedicating 15 acres of future vineyard in The Rocks District of Milton-Freewater to the brand, with plans for nearby tasting room near Milton-Freewater, Ore.

Meuret, a dentist from the Midwest, launched his brand a decade ago in Prosser, Wash., at the Winemaker’s Loft. In 2011, Seattle magazine named it as “Best Emerging Winery,” and a year later, he and his wife, Amy, moved to Walla Walla, where they nurtured Maison Bleue’s reputation with Rhône varieties and Chardonnay.

In 2015, Willamette Valley Vineyards brought on Meuret as consulting winemaker for its Pambrun Wines project, which focuses on young estate plantings of Bordeaux varieties in the SeVein development near Milton-Freewater, Ore.

“Working on the Pambrun Wines has allowed me to get to know the WVV team and how aligned we are in our mission to make the highest quality, terroir-driven wines,” Meuret said in a news release. “When they offered a solution to allow me to focus more on the vineyards and winemaking, and the opportunity for Maison Bleue to have an estate vineyard in the Rocks, it brought to life ideas I’ve wanted to pursue for years.”

Willamette Valley Vineyards, founded by Jim Bernau in 1983, will continue to operate the downtown Walla Walla tasting room on Second Avenue, pouring both Pambrun and Maison Bleue wines. The Oregon-based company operates four tasting rooms across the Northwest — downtown McMinnville, the Tualatin Estate in Forest Grove and at Bernau’s original estate near Salem.

Christine Clair, winery director for Willamette Valley Vineyards, debuted the Oregon company’s Elton brand in 2017 as part of celebration of Elton Vineyard and O’Brien Gardens in the Eola-Amity Hills. The Elton wines are crafted by Isabelle Meunier. (Photo by Eric Degerman/Great Northwest Wine)

Willamette Valley Vineyards, a public company traded on the NASDAQ, counts more than 10,000 investors who have helped fuel the company’s Oregon Estate Vineyards division in the past three years. Those plantings include acclaimed Elton Vineyard in the Eola-Amity Hills, Bernau Estate in the Dundee Hills, Pambrun and now the proposed Maison Bleue site.

Last summer, Willamette Valley Vineyards unveiled the standalone Elton brand as a continuing tribute to Betty O’Brien and her late husband, Dick, who founded the vineyard in 1983. Acclaimed winemaker Isabelle Meunier heads up the Elton wines.

In 2016, Willamette Valley Vineyards purchased 36 acres in The Rocks District of Milton-Freewater along Highway 11 and Sunnyside Road. Winery director Christine Clair said her team plans to establish Maison Bleue Vineyard this spring with 5 acres of Syrah. Next year, 10 more acres will be planted at that site below Pambrun Vineyard.

“I have to thank the SeVein managing directors — Norm McKibben of Pepper Bridge Winery, Marty Clubb of L’Ecole No. 41 Winery, and Chris and Gary Figgins of Leonetti Cellar — for their pioneering work in SeVein that helped us get started in the Walla Walla Valley, which led to this opportunity in The Rocks,” Clair said. “Driving through regularly on my way to SeVein got me acclimated and fascinated by the terroir, and I look forward to basing the Maison Bleue wines there. I’ve admired Jon’s winemaking and partnership greatly, so it is very exciting to connect the two.”