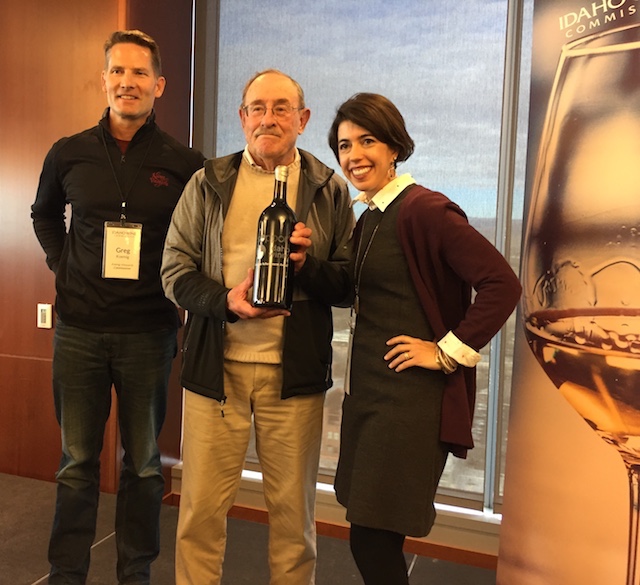 BOISE, Idaho — There were several rounds of applause this week during Idaho Wine Commission’s annual meeting in Boise, but the loudest stemmed from the standing ovation for Bill Stowe, founder of Indian Creek Farm Winery and recipient of the industry’s Lifetime Achievement Award.

“I’m speechless,” Stowe said. “I thank everybody, and I see another old guy there in Cheyne Weston. I can think of Steve Robertson and a bunch of other guys.”

Moya Dolsby, executive director of the Idaho Wine Commission, and commissioner Greg Koenig of Koenig Vineyards presented the award to Stowe on the 17th floor of the Zions Bank Building, the state’s tallest building.

“He started a winery in probably the most unlikely place, but through sheer grit and determination was able to keep it going at a time before the local movement took off, before Idaho wines took off, before you could even talk to people to get wine into restaurants and retailers,” Koenig said. “He stuck with it and continued to plant grapes, offer advice and share equipment.”

Last year, Stowe and his family celebrated the 35th anniversary of Indian Creek. In 2008, their winery in Kuna was named Idaho Winery of the Year by Wine Press Northwest magazine, a publication based in Kennewick, Wash.

“One of the best wine writers in the region at the time, Brooks Tisch, said something so eloquent, ‘This guy is making things that taste like Clos de Vougeot Burgundy that would be a bargain at twice the price,’ ” Koenig said. “He continued making quality wines, and one of the best wine stories in Idaho is that he was able to pass that to a second generation. His daughter and son-in-law are continuing the tradition of these beautiful wines and creating their own micro-economy of wine club members — and what’s probably Idaho’s only cult winery in essence because people come to this vibrant tasting room year in and year out.”

Koenig long has credited Stowe, a retired Air Force officer, with giving him his start in the industry. 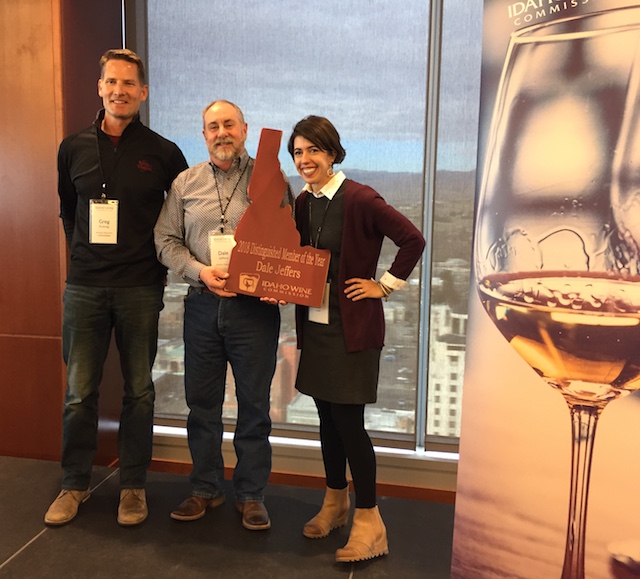 “I’ve been at this a long time, and you guys have helped me with making the wine,” Jeffers said. “I remember when this meeting was 20 to 25 people, so it’s been cool to see it grow and see what it’s done.”

NOTES: Several scholarships were awarded during the conference, but the largest gift was made by Kacey Montgomery, owner of Juniper on Eighth in Boise. He presented a $2,000 cheque to the commission to be used for wine education. “I think he carries more wine than any Idaho restaurant,” Dolsby said. “That’s $2,000! That’s unheard of! That’s awesome! Keep going to Juniper because they support us.” Montgomery said that figure represents 100 percent of the proceeds from the Freak Alley event that kicks off Idaho Wine Month each June. … Among the scholarship recipients is Anawae Chehali Lippincott, 21, a recent intern at Telaya Wine Co., in Garden City. The product of nearby Eagle is a viticulture and enology student at Washington State University in Pullman. Summer vacations in Chelan, Wash., helped inspire her pursuit of a career in the wine industry, she said. Lippincott has made WSU’s honor roll three times. … This year’s three-day conference included 17 presentations and featured keynote speakers Mike Veseth of The Wine Economist and Master Sommelier Tim Gaiser.