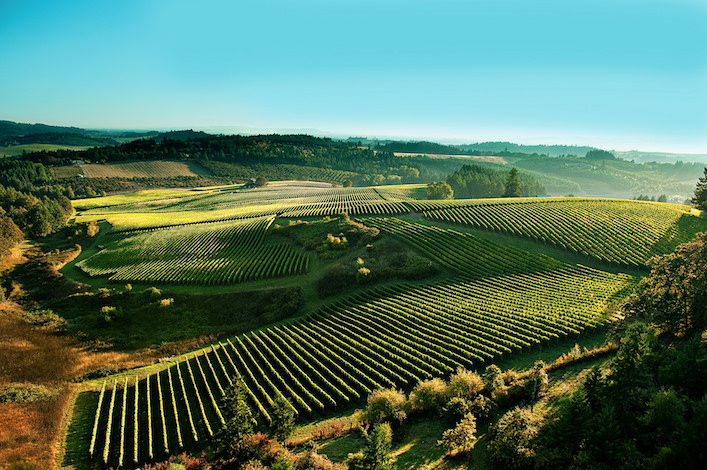 Shea Vineyard, a 140-acre planting established in the Yamhill-Carlton American Viticultural Area by Dick Shea, ranks among Oregon’s most prized sites for Pinot Noir. Bergström Wines has emerged as Shea Vineyard’s top client, contracting to purchase 10 percent of its fruit. (Photo by Carolyn Wells-Kramer, CWK Photography/Courtesy of the Oregon Wine Board)

When any wine lover around the globe says “Oregon wine,” “Pinot Noir” almost always comes to mind immediately. This is thanks to a singular focus dating back to the 1960s, when folks such as David Lett, Dick Ponzi and Dick Erath arrived and helped found the Oregon wine industry.

The first Pinot Noir was planted by Richard Sommer in the Umpqua Valley. Lett, known as “Papa Pinot” planted the first Pinot Noir in the Willamette Valley in 1966. One of turning points came in 1979 when one of Lett’s Pinots shocked the world in a French judging.

Since then, a laser focus has remained on Pinot Noir, a red grape most famous in France’s Burgundy region and Northern California’s Russian River Valley. Of the nearly 90,000 tons of wine grapes harvested each year in Oregon, more than 50,000 tons are Pinot Noir. The state’s No. 2 red grape is Cabernet Sauvignon, mostly coming from the Walla Walla Valley and used by Washington winemakers.

Here are nine Oregon Pinot Noirs we’ve tasted in recent weeks. Ask for them at your favorite wine merchant or contact the wineries directly.