Kristin Rice, left, and Gretchen Boock of Dobbes Family Estate/Wine by Joe toast their Joe to Go can program near their winemaking headquarters in downtown Dundee, Ore. (Photo courtesy of Wine by Joe)

DUNDEE, Ore. – Oregon-grown star winemaker Joe Dobbes made Gretchen Boock his first hire for Dobbes Family Estate/Wine by Joe, and 15 years later, she and Kristin Rice are taking the next step with Joe to Go canned Oregon wines set to go national.

Last fall, Dobbes publicly mapped out his retirement from Dobbes Family Estate, Wine by Joe and the restaurant-focused Jovino. With that came the promotion of Boock into the role of CEO and Rice entrenched as brand marketing manager. Today, Wine by Joe announces the rollout of its canned lineup of Pinot Gris and rosé in 14 states. The 375-milliliter Joe to Go cans will sell for $6.99 each, the equivalent of $14 per bottle.

“Offering our customers ‘wine to go’ on whatever adventure awaits – and without a wine glass, is part of a larger company initiative to be responsive, real and relatable,” Boock said. “We are in an exciting transitional period with these new wines, our new winemakers, and an improved approach to social responsibility. ”

All combined, Boock’s team produces more than 200,000 cases of Oregon wine, pulling from both the Willamette and Rogue valleys, including Seabreeze Vineyard, a 214-acre estate planting just west of the Eola-Amity Hills. They also perform winemaking for select clients under their Dundee Vintners operation. This new adventure is starting with 240,000 cans, equal to 10,000 cases of wine. 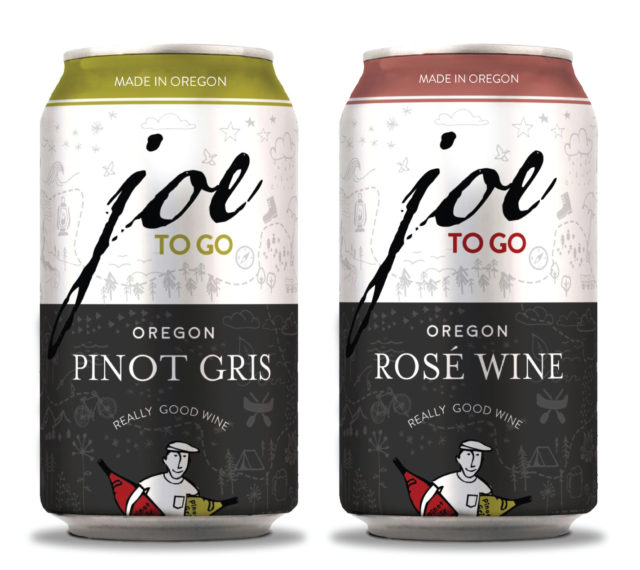 Joe to Go cans of nonvintage Oregon wine are scheduled for distribution into 14 states this spring via V2 Wine Group. (Photo by Joe to Go)

“Those are the Saturday night wines,” Rice said.

So Joe to Go is the natural next step as “the Wednesday night and the pizza wines,” and Rice views it as Wine by Joe 2.0.

“We are looking at this as an opportunity to refresh our brand and revisit the transition with Joe taking a step back,” Rice said. “We want to remind people that we’re an Oregon business, and we’re continuing to dig deeper into our roots.

“We’re giving our employees more of a voice, and since we’re doing it without Joe now, we are figuring out who we are as a company and sharing our transparency with consumers,” Rice added.

Boock’s background is at the core of “2.0,” and she’s been there from the first chapter. Stories of her work ethic include working in broccoli fields as a youth to save up for a pair of Nike shoes. She paid her way through Oregon State University by working for her parents’ construction company in Mount Angel, the blue-collar town perhaps best known for Traeger pellet grills.

“I swung a hammer for lots of years,” Boock says with a sense of pride. “Like Joe, I grew up with that ethic of hard work and family roots, and Mount Angel is similar to where he grew up in Molalla. Neither one of us is afraid of hard work.”

These days, her peers include Amy Prosenjak, president of A to Z Wineworks, Oregon’s largest wine company; Anna Maria Ponzi of Ponzi Vineyards, Mary Olson of Airlie Winery and Christine Collier Clair, winery director of Willamette Valley Vineyards — the company Dobbes left in 2001 to break out on his own.

He and Boock (a Dutch name that rhymes with lock) first crossed paths in 1999 when she worked in the cellar at Willamette Valley Vineyards in the midst of her OSU coursework that led to degrees in agricultural economics and Spanish.

“My family built lots of wineries in the valley, and at one point I thought, ‘I’d like to try working inside these walls,’ so I sent letters to a certain number of wineries with 30 to 40 minutes of Oregon State,” Boock recalls. “I got a call from Joe, who noticed that I grew up in Mount Angel, and I went to work for him the next day.”

Four years later, when Wine by Joe became a bonded winery, Boock was hired as cellarmaster. She may have entertained a few regrets when crushing at Tualatin Estate Vineyard prompted her and newlywed husband, Mike, to live in a family motor home.

“I would be up at 2 a.m. and 3 a.m. and ran the press, but that’s been the spirit of our company – you just roll up your sleeves and get it done,” she said. “And Joe was driving from Salem to Banks all those years. It’s all part of the bootstrapping story.”

Devotion and dedication help explain why Boock, 40, has worked for the same company for 15 years, why she and Mike are busy raising three young children and how their family has survived a major home renovation in Dundee. Guess who served as the general contractor?

“It’s so refreshing to see a woman out there leading a company, taking charge and being transparent,” Rice said. “Gretchen has never let being a woman in the wine industry get in her way. Joe gave her that chance by saying to the rest of the industry, ‘You are on my team.’ It’s been an awesome story to tell during Women’s History Month.” 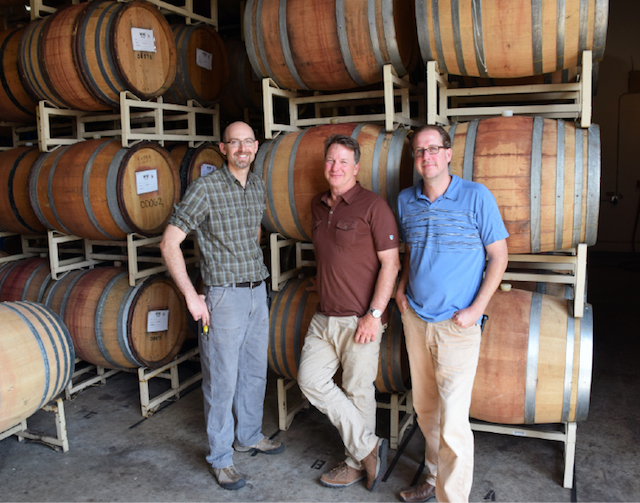 Joe Dobbes, center, surrounded himself with talent at Dobbes Family Estate/Wine by Joe in 2015 before stepping away last year, and winemaker Andy McVay, left, and Travis Proctor, director of winemaking operations, both remain. (Photo courtesy of Dobbes Family Estate)

Union Wine Co., in nearby Tualatin has pioneered canned wine in the Northwest under its Underwood tier, producing a reported 4.2 million cans in 2017. Meanwhile, Seattle’s Precept Wine is devoting resources and marketing to its canned House Wine campaign. Precept chief sales officer Kirk Brewer estimates his House Wine team will produce the equivalent of 200,000 cases this year — 4.8 million cans.

“That’s so amazing and so scary at the same time,” Boock said with a chuckle. “We’re taking baby steps compared to that. I don’t think anybody is feeling 100 percent solid about it yet, but the trends are really strong.”

Proctor is the “head mixologist” on the Joe to Go program, which at this point will be canned on-demand. Both the Pinot Gris and the rosé came primarily from Seabreeze and Coria vineyards, the latter a 94-acre site near Salem that Wine By Joe has long-term contracts with. Both likely would play a role in a Joe to Go Pinot Noir, but there’s no timeline yet.

“We’re really working on that still,” Boock said. “If we can add Pinot Noir to the lineup, that would make it a complete offering, but we want to make sure that it can be at the level of quality and at the price point.”

Rice, a product of Texas Tech’s communications school, referenced a recent overview by San Francisco Chronicle wine columnist Esther Mobley on the rise of canned wine in the U.S., which noted that sales in the category increased by 60 percent last fall. Nielsen charted sales up 125 percent from 2015 to 2016.

“Obviously, we’re rooting for the upswing,” Rice said. “It’s still a new concept for a lot of people.”

While some aromatic nuances go missing when not pouring canned wine into a glass, Rice said, “cans are really great for white wine and the lining keeps it lively and fresh. Personally, I think it tastes better drinking it straight out of the can. The liners in cans these days ensure that what goes into the can comes out tasting exactly the same.”

Joe to Go distribution is tied to V2 Wine Group. And there’s a history of success for Wine by Joe. Wine Business Monthly selected Wine by Joe as its No. 1 Hot Small Brand of the Year for 2011. That same year, San Francisco-based Bacchus Capital Management became an equity partner.

These days, Boock bounces her ideas off Bacchus partner Rob Rupe rather than Dobbes, now a rather silent part-owner in the empire he built. Besides, he’s focused on his new post-retirement business — Dundee Mobile Bottlers, which also handles sparkling wine.

In the works ahead of Boock’s promotion, Dobbes Family Estate entered the sparkling wine world with its 2016 Elements, a bottling ($26) dominated by Pinot Gris backed by Auxerrois, Gewürztraminer and Chardonnay. A portion of its sales are donated to Washed Ashore, a non-profit effort based in the Oregon coastal town of Bandon that turns plastic pulled from the sea into artwork. The entire concept represents yet another dream that Dobbes pulled into reality.

“I remember him one day with that old (Chevy) Tahoe he drove, pulling out these sketches of a little man that he drew, and telling me, ‘We need to make a wine for the people and wine that people can afford — wine by Joe!’ ” Boock said.

While a California company took the first Joe to Go cans, Tinman Mobile Canning in Clackamas, Ore., handled the second run. It’s no stretch to envision “Hollywood Joe” adding that service to his young company, too.

“Joe was here last week and we exchange email once every couple of weeks or so, but he doesn’t stop by that often because he’s really busy with that new bottling line of his,” Boock said. “That’s the story of his life.”