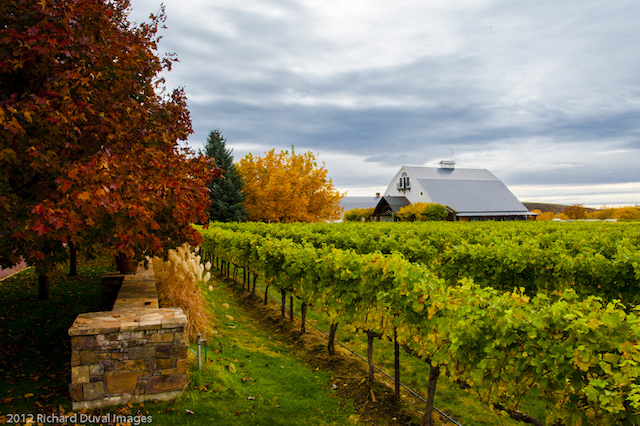 Today, the Harrisons will announce the sale of majority interest in both the winery and the inn at Abeja. Seattle businessman Arnie Prentice becomes their partner in the winery. John Oppenheimer, founder and CEO of Seattle-based Columbia Hospitality, has become majority owner of the inn.

The Harrisons, who will remain part of the ownership team and stay involved in the winery, noted that the husband/wife winemaking team of Daniel Wampfler and Amy Alvarez-Wampfler, as well as longtime innkeeper/chef Mary Besbris, will be retained. Great Northwest Wine learned of the sales in advance of today’s announcement. Financial terms of the transactions were not disclosed.

“Meticulous attention to detail from vine to cellar to bottle has always defined Abeja wines,” Ken Harrison stated in a news release. “Separating operations of the winery and The Inn will allow us to sharpen our focus on the wines and continue our mission of delivering the highest quality product.”

“As longtime patrons of Abeja we couldn’t be more excited to become partners on this incredible property,” Prentice said. “We’ve always enjoyed drinking their award-winning wines and staying as guests at The Inn, and are proud to work with Columbia and the Harrisons to continue the legacy of this extraordinary estate.” 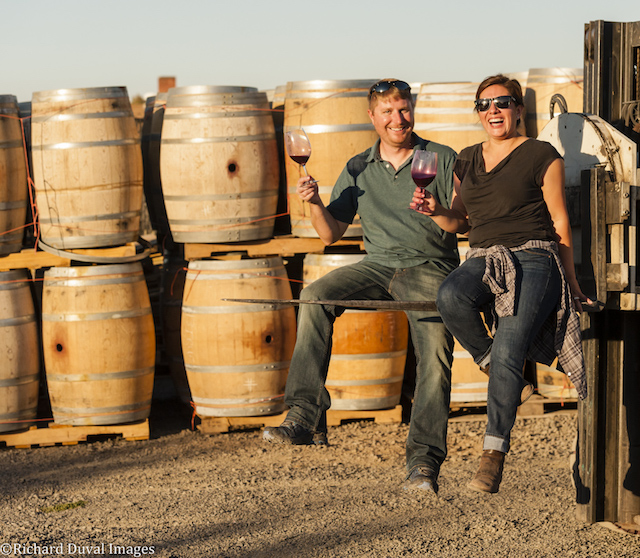 Daniel Wampfler and his wife, Amy Alvarez-Wampfler took over the winemaking at Abeja on the heels of the 2015 crush. The products of Ste. Michelle Wine Estates came over from Walla Walla brands Dunham Cellars and Sinclair Estate Vineyards, respectively. (Richard Duval Images)

Columbia Hospitality will oversee management and operations on behalf of the ownership team acquiring the boutique inn. The Salish Lodge & Spa in Snoqualmie, Friday Harbor House on San Juan Island and the historic Knob Hill Inn in Sun Valley are among the luxury destinations across six Western states for Seattle-based Columbia Hospitality.

“The Inn at Abeja is the ideal addition to our expanding collection of unique properties,” Oppenheimer said. “We look forward to building on the phenomenal experience Ken and Ginger have created, including hosting more events and weddings on this stunning property, and continuing to work with the onsite team to provide exceptional guest experiences at this local gem.”

The sale of the inn prompted the creation of The Inn at Abeja Vineyards, LLC, which includes the Harrisons, Prentice and Oppenheimer. Prentice brought on several silent partners for the winery transaction, and he’s also minority owner in the inn.

Under the new agreement, the winery will retain control of its two vineyards — 18-acre Heather Hill at the south end of the Walla Walla Valley in Milton-Freewater, Ore., and the 12-acre Mill Creek Road planting that frames a portion of the 38-acre Abeja estate.

The Harrisons established Abeja in 2000 after buying the Mill Creek Inn and its surrounding century farm. They worked early on with Napa winemaking consultant Zelma Long prior to hiring John Abbott, who developed Abeja’s cult-like reputation for award-winning Cabernet Sauvignon, Chardonnay and Merlot. Abbott, an Oregon State University grad, resigned at Abeja following the 2015 crush to focus on making wine in the Willamette Valley under the Devona brand he shares with his wife, Molly Galt.

Oppenheimer created Columbia Hospitality in 1995, and the company plans to open six new hotels within the next two years, including one in Montana, stretching its hotel portfolio to 23. The Inn at Abeja becomes Columbia Hospitality’s 11th hotel in Washington state. Overall, Oppenheimer’s team manages more than 40 properties, which include the Bell Harbor International Conference Center and golf courses such as McCormick Woods. They’ve been involved in more than 100 hospitality projects worldwide.

“From the start, our vision has been to preserve, protect and share the peaceful, calming beauty of this incredible property through world-class hospitality,” said Harrison, former CEO of Portland General Electric. “John shares our unique vision, and Columbia Hospitality’s standards of excellence are in keeping with our commitment to crafting exceptional wine and providing guests with an opportunity to immerse themselves in the tranquil allure of this pristine setting.”