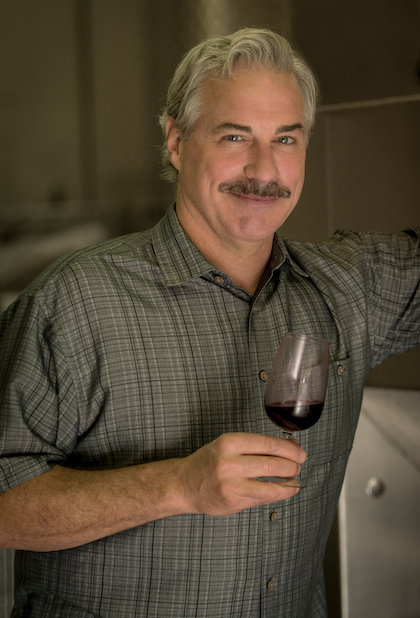 DALLAS, Ore. – Tony Rynders has made some of the Oregon wine industry’s most acclaimed wines for a variety of owners, and today marks the debut for Open Claim Vineyards — one of the Willamette Valley’s up-and-coming plantings.

Today, the Walls begin by selling their Open Claim Vineyards 2015 Chardonnay ($75). Vineyard-designated wines for the Walls falls cleanly within many of Rynders’ other projects. Meanwhile, his own brands, Tendril Wine Cellars and Child’s Play Wines, will continue to be developed upon blends of multiple vineyards. Those two labels, at about 1,000 cases each, make up about 20 percent of Rynders’ work. 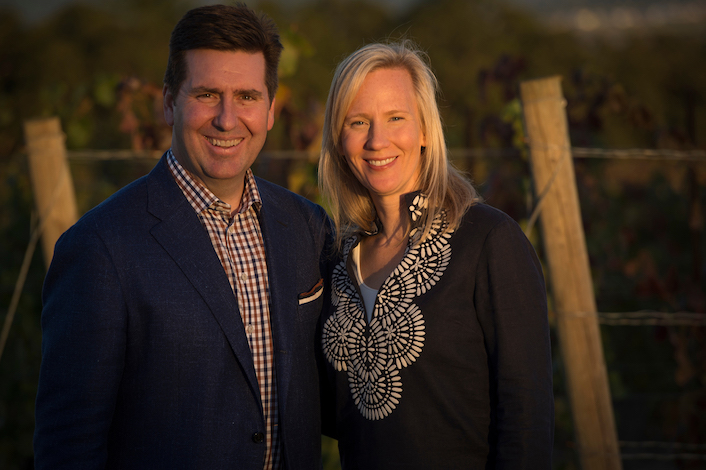 Brett and Marnie Wall of Open Claim Vineyards plan to open a tasting room and small winery during the fall of 2019 on their estate within the proposed Mount Pisgah appellation west of Salem, Ore. (Image courtesy of ©Andréa Johnson Photography)

Open Claim Vineyards, about 15 miles west of the state capital, is along Clow Corner Road in the foothills of the Coastal Range between the towns of Dallas and Monmouth. It’s nearest neighboring vineyard is Illahe, with Amalie Robert, Croft, Erratic Oaks and Freedom Hill vineyards to the southwest. Leaders in the area have petitioned the federal government to establish the Mount Pisgah AVA, an effort spearheaded by Brad Ford of Illahe Vineyards.

Brett Wall is senior vice-president and president for the brain therapies division of Medtronic, one of the world leaders in medical devices. His group’s headquarters are in the Orange County city of Irvine, Calif.

The Open Claim site, however, has been in Marnie Wall’s family for more than 20 years. They hired Results Partners to establish the vineyard with 3 acres of Chardonnay and 18 acres of Pinot Noir in 2012. Vineyard manager Alex Cabrera, formerly of Abacela, works with two clones of Chardonnay (76 and 95) as wells as eight clones of Pinot Noir (Coury, LaTache, Pommard, Wädenswil, 115 667, 777 and 943.)

The Walls plan to build and open a tasting room and small vinification facility on their Polk County estate in time for the 2019 crush, and their goal is to feature the Bellepine, Rickreall and Willakenzie soils while staying within the natural framework of the surrounding 55-acre estate.

“Honoring the land and respect for nature inspires all of our decision-making – from use of solely organic practices and dry-farming to encouraging biodiversity through the preservation of our vineyard’s unique oak enclave and wildlife corridor,” the Walls said in a statement.

They named the vineyard and their brand as a tribute to the federal Donation Land Claim Act of 1850. The Walls estate — Parcel #68 — was part of the official promotion of settlements in the Oregon Territory. As such, there were open claims for 320-acre blocks available to any settler who lived and farmed that block for four straight years. 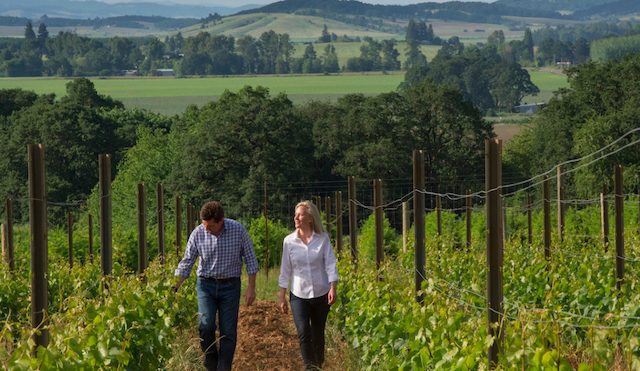 Midwest natives Brett and Marnie Wall have transformed a portion of Willamette Valley land in that has been in her family for more than 20 years into Open Claim Vineyard. (Image courtesy by ©Andréa Johnson Photography)

Open Claim Vineyards, poised to release its 2015 Pinot Noir this fall, has set up shipping to Alaska, Florida, Minnesota, Oregon and the District of Columbia. There were 57 cases of the debut Pinot Noir produced, which will follow the 77 cases of 2015 Chardonnay into market.

“I met with the Walls and it became apparent that we had a lot in common,” Rynders said. “They wanted to do something special with their vineyard and winery. We both thought the site was very interesting and had potential. They liked the over-vintaging approach (16-plus months in barrel and bottle-aging) that I was strongly recommending as a point of differentiation for their (and Tendril’s) wines.”

The Walls also have a history of beverage sales in their background. One of Brett’s first jobs after graduating from the University of Nebraska in 1987 with a business degree was as a territory manager for the Coca-Cola Co. And the Walls also share a Midwest connection with their winemaker.

“Brett and I are both Big Ten alums and ravenous football fans. He is a Husker, and I am a Badger,” Rynders said. “And Marnie and I both hail from the great state of Wisconsin.”
featuredticker