15 years of women in wine at Walla Walla Community College 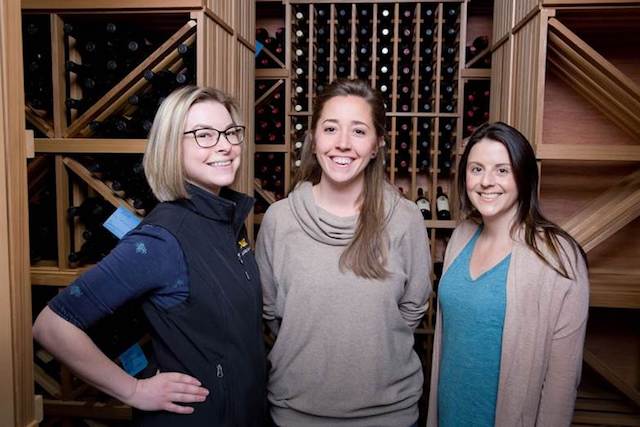 WALLA WALLA, Wash. — This spring marks the 15th anniversary of Walla Walla Community College’s enology and viticulture program, from which 280 students have graduated. Of those graduates, 77 are women. When another 23 students graduate on June 16, eight will be women.

Elizabeth Bourcier was a member of the first graduating class, in 2003. Ari Nickolisen is graduating this June and will head to Oregon State University’s viticulture and enology bachelor’s program. Sabrina Lueck has been working and teaching at WWCC since 2011. Each is positioned to inspire and continue to help shape the wine industry. 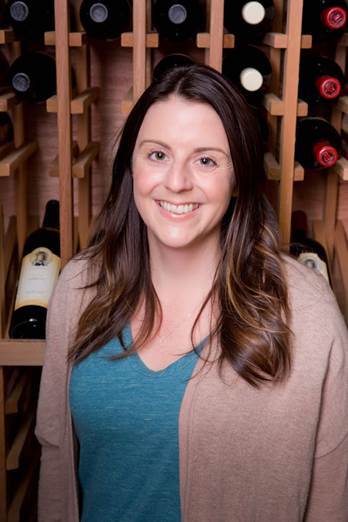 Bourcier grew up in Kirkland, in a home where French and Italian wines were served and discussed at dinner. Lueck grew up in Victoria, British Columbia, helping her father make homemade wine. Nickolisen grew up in McMinnville, Ore., working outdoors on her family’s blueberry and timber farms, developing a passion for plants.

Bourcier’s father traces his ancestry back to Château Haut Bourcier, in the Bordeaux region of Côtes de Blaye. As a high school student, she spent a month in the Loire Valley with her parents on a wine-tasting trip.

She was still in high school when her father let her know that studying winemaking was an option.

“That’s when I realized that I could learn to make wine,” she remembers.

Her father heard that WWCC was going to be starting a winemaking program and took her to meet the program’s founder, Myles Anderson, who welcomed her into that inaugural class.

“He was the most influential person in my career,” she says. “You’ll never meet anyone like Stan. He was very involved in the students’ lives. I really needed someone like him, as a mentor, because it wasn’t easy to move here alone back in 2002, at the age of 18.”

“We played racquetball together,” she continues, “and he inspired me by getting me out to different wineries to help bottle, or help with pruning. He helped me with my chemistry homework. He would drop whatever was going on in his own life for any student. He even personally helped pay for certain students to go to school. Whatever you needed, he was there.”

Being in the first graduating class offered her some unique experiences. She recalls one day when Clarke drove up in his minivan.

“The back was filled with picking bins of Riesling,” she says. “The school had a new press, but nobody had ever used it. Stan gave us the grapes, told us to have fun, and wished us good luck. And so I read the manual and figured out how to press the grapes.”

They were also the students who began planting the Bordeaux varietals in the school’s estate vineyard, now called the Stan Clarke Vineyard, a poignant tribute to the beloved figure who died unexpectedly in 2007 and was inducted posthumously the following summer into the Legends of Washington Wine Hall of Fame.

There were just half a dozen students in that first graduating class with her, including Bill vonMetzger, who went on to become the winemaker at Walla Walla Vintners, Chris Peterson, the winemaker and co-owner at Avennia, and Steven Thompson, now the owner and winemaker at Analemma.

Today, Bourcier is the assistant vigneronne at Cayuse Vineyards near Milton-Freewater, Ore., helping to create its highly regarded Biodynamic wines. In addition, she has her own micro-label, La Rata Wines, that produces a single critically acclaimed wine per vintage. She’s also a member of Walla Walla Community College’s advisory board of the EV program, where she was instrumental in getting a training course offered by the college for Hispanic vineyard workers to increase their knowledge of English. 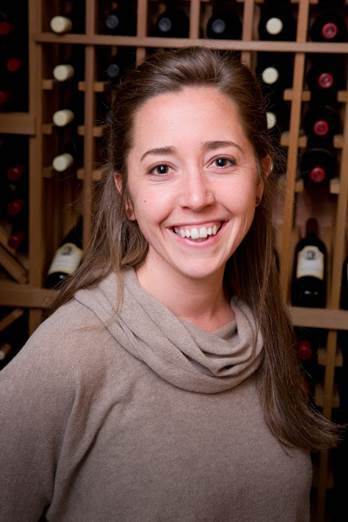 Ari Nickolisen, class of 2018 at College Cellars, plans to pursue a bachelor’s of science degree in viticulture and enology at Oregon State University. (Image by Steve Lenz Photography/Courtesy of Walla Walla Community College)

Ari Nickolisen came to the EV program with a wealth of practical experience. She was born and raised in McMinnville, and grew up in a farming family. Her family’s 500 acres of timber were originally her great-grandparents’ property, and have been worked by the family ever since. As young girls, Nickolisen and her two sisters worked dragging limbs, building brush piles and clearing blackberries, always working outside, always with plants.

In 2011, the same year Lueck joined the EV program, Nickolisen had a small business selling flowers, tending bar on the side, in McMinnville – home to the International Pinot Noir Celebration. There, in the epicenter of Oregon’s wine region, she met a lot of wine industry people.

“I was pouring Oregon wines, and customers would ask me about them, and I had no idea what to say about a wine except that it was a classic example of Oregon Pinot Noir,” she remembers.

Determined to improve her knowledge, she worked her first harvest with Dominio IV Winery in nearby Carlton. She had spent the four years after high school traveling all over Central America and Spain, and was thrilled to realize that working in wine meant that she could work a harvest here, and then travel to the southern hemisphere and work a harvest there.

For two years, Nickolisen alternated seasons working at Mahi Wines in Marlborough, New Zealand, with harvests at Dominio IV. In 2015, she worked the harvest in Chillán, in the Itata Valley of central Chile, before deciding that she was tired of living out of a backpack.

She also came to a startling realization.

“I had the practical aspects of winemaking down pat, but I had no theory to back it up,” Nickolisen said. “I knew how to add sulfur to wine, but I didn’t know exactly what it did, or when to add it.”

She moved to Walla Walla, landed a job at famed Gramercy Cellars and enrolled in the WWCC program. As part of her studies she did an internship in France, at the tiny Domaine Pascal Henriot in Champlitte, northeast of Dijon in the Franche-Comté, making wines with natural yeasts and no additives except sulfur. Things there were very different.

“The entire harvest lasted only four weeks, and we did just a very little bit of cleaning, with cold water,” she recalls, instead of the endless scrubbing with hot water and sanitizers that is common in American cellars.

“Going to France was such a refreshing, rejuvenating experience,” she says. “Winemakers there work hard and live a simple life, but their quality of life is so high, and they’re so happy. Making wine is much more difficult here.”

Returning to school afterwards, she studied winemaking theory with Lueck and the other faculty. 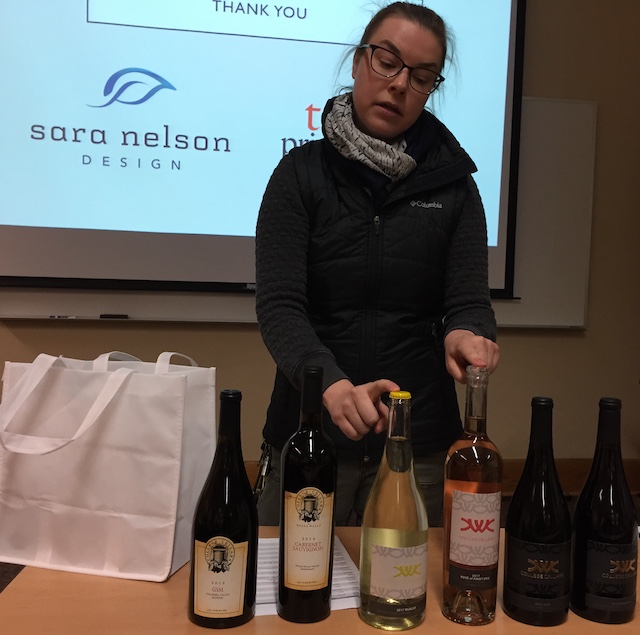 Lueck’s parents are Canadian, although she was born in Baltimore, Md., while her father was teaching at Johns Hopkins. From the age of two she was raised in Victoria, B.C.

“The best part of that,” she says, ”is that I have dual citizenship, so it’s made it easy for me to live and work in the United States.”

“My Dad made homemade wines from kits in those days” she recalls, “and I used to rue the days when I would have to make homemade printed labels and stick them on the bottles.”

After graduating from high school she enrolled at Cornell University with the intention of studying neurology. But when she learned that they had a winemaking program, she quickly switched to that.

In 2010, she was one of the first graduates of their newly minted viticulture and enology program, which at the time was mainly theoretical and did not have a facility for students to make wine.

Upon graduation she was offered a short-term job with Ste. Michelle Wine Estates in Paterson, Wash., filling in for an enologist on maternity leave. Lueck accepted the job and moved to the Columbia Valley, sight unseen.

She later worked at a tasting room on Red Mountain before being hired at WWCC. Initially, she did a bit of everything, learning the practical aspects of winemaking and supporting the program in the classroom, as well as with production and sales. Now she’s the college’s enology instructor and wine marketing manager.

Although the wine industry has traditionally been male-focused, Lueck is pleased to add that “our program has a really nice wave of incredibly hard-working female students.

“I love Elizabeth’s quiet passion,” Lueck continues. ”She’s all about thoughtfulness and quality. And Ari has so much power and presence. Before she came to our program she already had a rich background in winemaking. Elizabeth is already pushing winemaking style forward in this valley, and I think Ari is going to do the same thing in Oregon with Pinot Noir.”

Lueck is studying for her Master of Wine (MW) certification. There are only 370 MWs in the world, of which 125 are women, living in 28 countries across five continents. There are three MWs in Washington: Bob Betz, founder of Betz Family Winery; Joel Butler, the first American resident MW and now owner of World of Wines in Redmond; and Billo Naravane of Rasa Vineyards in Walla Walla. Lueck hopes to become the first woman in the state to earn the title.