2018 vintage for Northwest wine growers tracks ahead of hot 2015 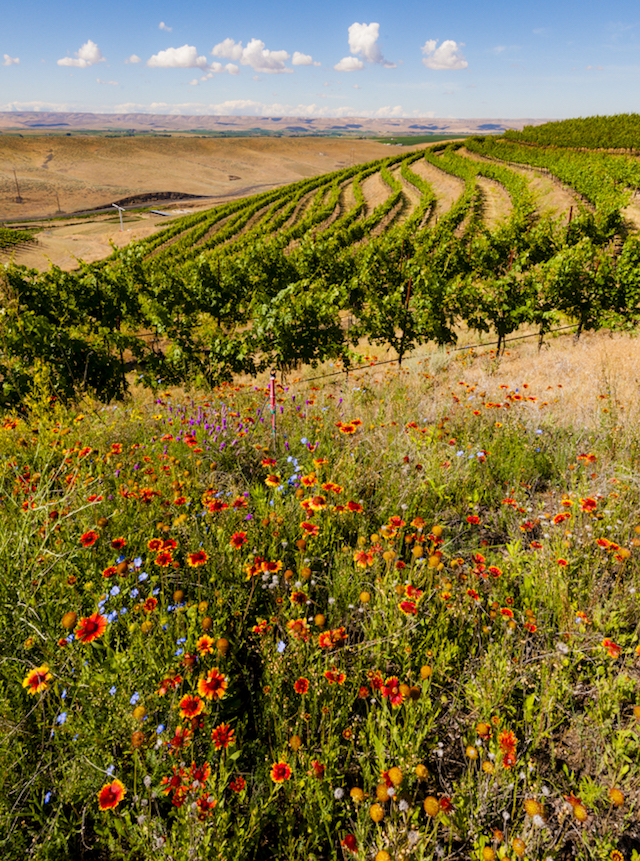 Vines throughout the Pacific Northwest began the month of June with growing degree days ahead of the record-hot 2015 vintage. (Photo by Richard Duval Images)

McMINNVILLE, Ore. — The hot and early 2015 vintage set records throughout the Pacific Northwest in terms of growing degree days, but spring 2018 is on pace to surpass that year, according to recent climate data.

Linfield College educator Greg Jones, one of the wine world’s leading experts in climate research, summed up the month of May as warmer than normal.

“Temperatures in Oregon, Washington and Idaho in May were 2-6°F above normal in May with major cities experiencing one of their warmest Mays on record,” Jones stated in his most recent Weather and Climate Summary and Forecast.

And a number of the recording stations in Washington, Oregon and Idaho that track weather data indicated the growing degree days on a record trajectory.

“Heat accumulation amounts for four locations that I have tracked for many years in Oregon are all above the 1981-2010 normals for the months of April and May, and are close to or above the GDD that was seen at this same time in both 2015 and 2017,” wrote Jones, who celebrates in August his one-year anniversary in McMinnville as Linfield’s director of the Grace and Ken Evenstad Center for Wine Education.

In fact, last month’s temperatures recorded nationwide by the National Oceanic and Atmospheric Administration made headlines as the warmest May recorded in U.S. history, surpassing the Dust Bowl of 1934. 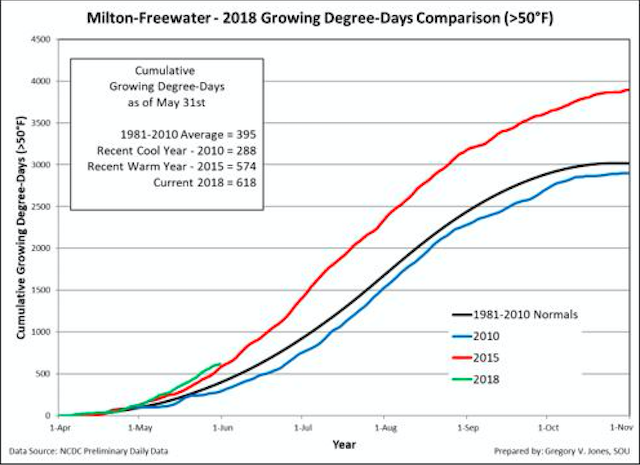 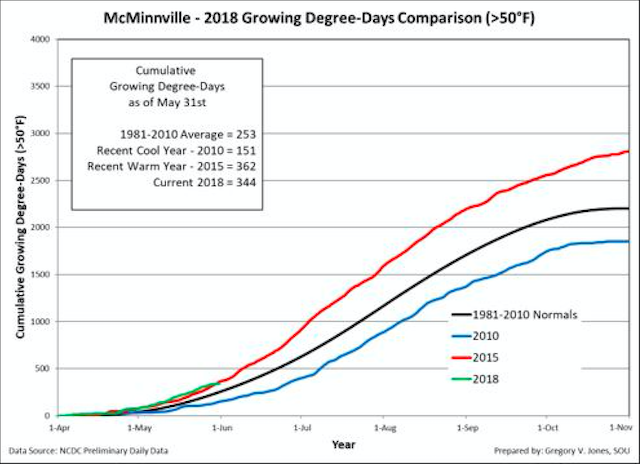 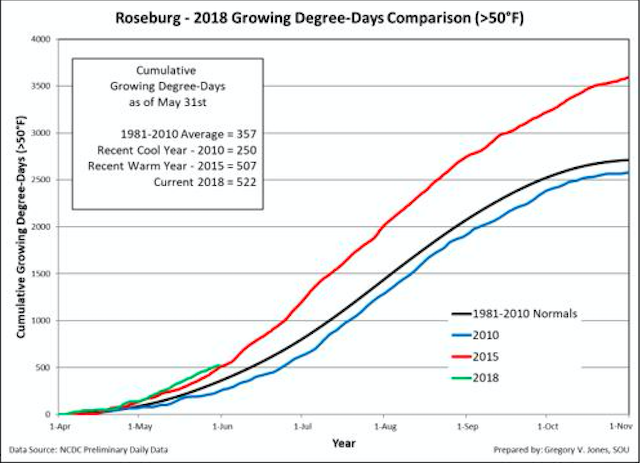 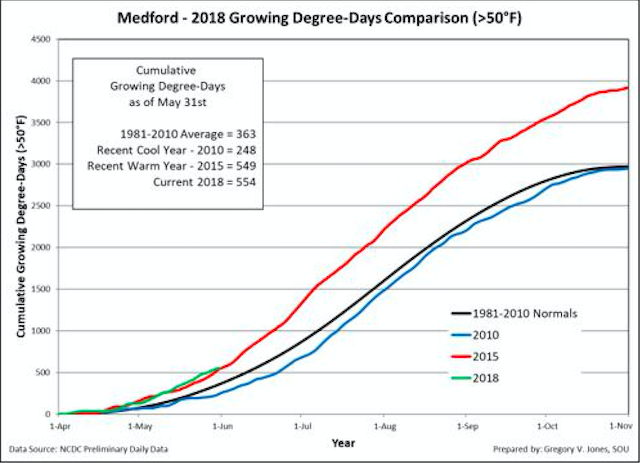 Growing degree day accumulations for weather reporting stations in the Walla Walla, Willamette, Umpqua and Rogue valleys for the 2018 vintage through May. (Data from the NOAA National Centers for Environmental Information/Charts by Greg Jones, Linfield College)

In the Walla Walla Valley town of Milton-Freewater, Ore., there were 618 GDD through May 31. At the same stage in the record-hot vintage of 2015, there were 574 cumulative growing degree days.

“Growing degree-days (GDD) over the western U.S. show an April through May that was largely above normal,” Jones wrote. “Wine regions in Idaho, Washington and Oregon have seen GDD running 50-250 units above normal.”

Through May 31, there were 704 growing degrees days recorded at the Wahluke Slope station. A year ago, it charted 473 GDD. During the 2015 vintage, it stood at 670 when June began.

On Snipes Mountain in the Yakima Valley, there were 655 GDD registered. A year ago, the accumulation stood at 428 GDD. During the blistering 2015 season, it was 612. 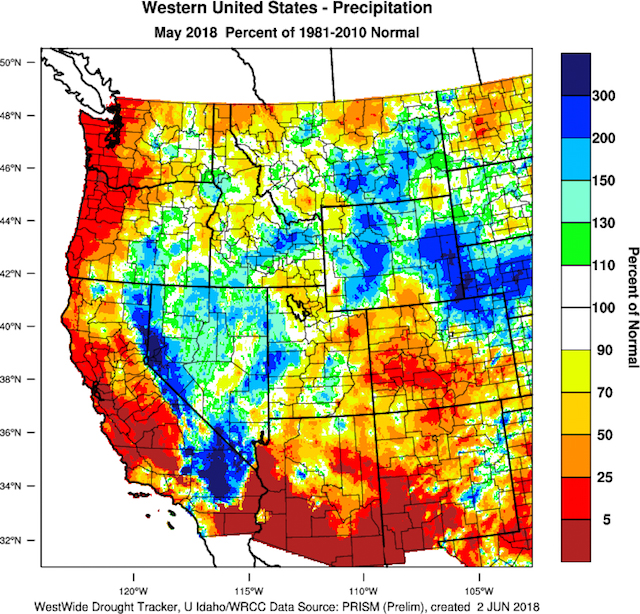 The WestWide Drought Tracker indicates the mean precipitation for the month of May 2018 and its departure from the 1981-2010 norm. (Map courtesy of University of Idaho/Desert Research Institute)

In McMinnville, the home of Linfield College and the heart of Willamette Valley’s Pinot Noir territory, there were 344 growing degree days — just off the 2015 mark of 362. However, data from the two Southern Oregon sites used in his report were above the 2015 recordings.

In Roseburg, home to the Fault Line Vineyards and Abacela Winery established by his father, Earl Jones, there were 522 GDD compared to 507 of three years ago. In Medford, not far from the Southern Oregon University campus were Greg Jones worked for two decades, the station charged 554 GDD, five ticks ahead of the 2015 track.

“The seasonal forecast for June through August suggests a strong chance for warmer than average conditions over the western US,” Jones wrote. “The precipitation forecast calls for seasonally dry conditions during the same period, with the PNW likely to be the driest region.”

However, Jones added that climate researchers are not yet predicting the 2018 growing season will be hotter than the 2015 vintage.

“All analog years and forecasts indicate that 2018 is highly likely to end up close to the average heat accumulation of the last five years across the majority of the western U.S.,” he wrote.

Ample snowpack means there are no concerns for irrigators in Washington state, but portions of Oregon might be affected.

“Southern California across into the desert southwest and Four Corners region continue running 20-40% of normal, while central to northern California and much of Oregon have been 60-90% of normal,” Jones wrote. “Washington, northern Idaho, Montana and a small area of the northern Sierra Nevadas continue to show 110-200% greater than average precipitation for the water year.”

This weekend, the weather from the Gulf of Alaska will influence the Pacific Northwest, bringing slightly cooler than average conditions with some minor rain that will slow the growing degree days during the month of June. Forecasts served to warn travelers heading over mountain passes that the snow level could fall to 4,000 feet elevation.

“The precipitation forecast over the next 90 days points to a pretty typical seasonal dry down to slightly drier than average conditions in the PNW, while California is expected to be near average or seasonally dry,” Jones concluded.