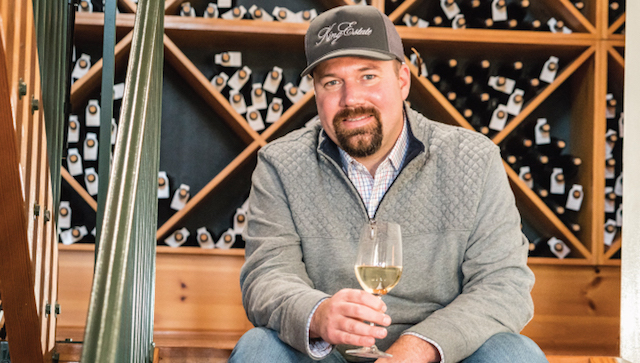 The rapid rise at King Estate for winemaker Brent Stone continued Monday when he added the title of chief operating officer at the iconic Eugene, Ore., winery.

“With his breadth of skills and experience, Brent has long played a key leadership role at King Estate,” co-founder/CEO Ed King stated in a news release. “By creating this new position, we are continuing to solidify winemaking’s central role in our company.”

Stone remains in the position of head winemaker, but he now also oversees day-to-day winery operations for the 150,000-case production, which includes King Estate as well as the growing North by Northwest brand that’s focused on Columbia Valley fruit.

His early career included serving as a research-and-development chemist in addition to quality assurance in the dairy industry. He joined King Estate in 2011 as lab manager and worked his way into quality assurance and laboratory operations. In 2016, he was named winemaker. A year ago, Stone saw Barrett Rosteck promoted to associate winemaker and Andrew Belzer to assistant winemaker.

Along the way, Stone earned a two-year degree in enology at Washington State University. His continuing education has him as a graduate student in agricultural food and life sciences at the University of Arkansas.

This spring, the King family sold its consumer-minded Acrobat brand to Foley Family Wines in Sonoma, Calif. Recent production of those Acrobat wines topped 156,000 cases, accounting for half of the wine made by Stone’s team at King Estate during 2017, when Ray Nuclo served as both director of viticulture and winery operations. The Kings farm more than 1,000 acres of vineyards, orchards and timber that surround the showpiece winery, which is less than 20 miles from the University of Oregon.

In 2016, which marked the 25th anniversary of King Estate, those vineyards became the largest certified Biodynamic by Demeter in the United States. The Demeter USA headquarters are about an hour’s drive to the north in Corvallis, home to Oregon State University.