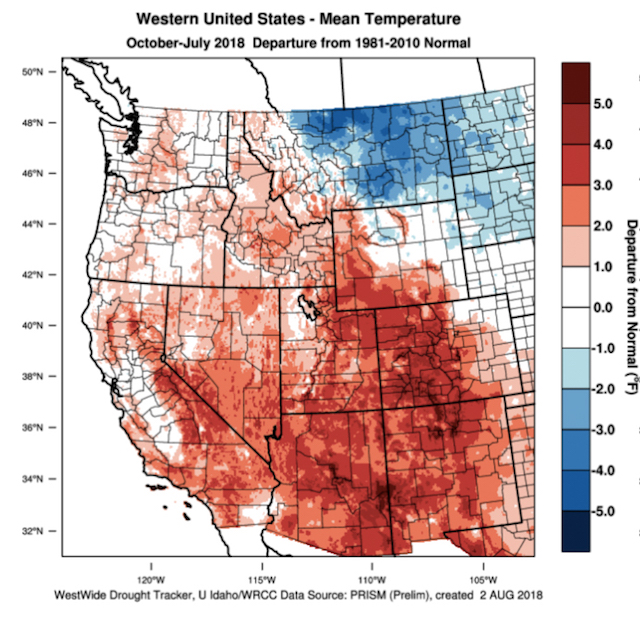 Vineyards for the Pacific Northwest wine industry have entered the second half of the season for the 2018 vintage, and growing degree data has them tracking comfortably behind the record warm year of 2015.

Climate researcher Greg Jones, director of the Evenstad Center for Wine Education and Evenstad Chair in Wine Studies at Linfield College in McMinnville, Ore., likens the accumulation of growing degree days to those of the 2013 and 2014 vintages. At this pace, this 2018 vintage will fit within the average of the previous five years, he noted.

“The GDD to date in 2018 for Western U.S. wine regions is slightly behind to roughly the same as the GDD seen in 2017 and continues to run very close to the values seen in 2013 and 2014 at this point in the growing season,” Jones wrote in the Weather and Climate Summary and Forecast he released Sunday.

This vintage got off to a hot start this spring, ignited by what was nationally the warmest month of May recorded in U.S. history, but the growing degree days that were running ahead of the hot 2015 vintage slowed down a bit during June.

The month of July brought a spate of wildfires to the Pacific Northwest, and Jones noted that continued warmer-than-average conditions are expected through the third week of August.

“July 2018 played out to the forecasted warm and dry conditions, especially in the western U.S. where many areas experienced one of the warmest July’s on record and unfortunately an active fire season,” Jones wrote. “Temperatures were 1-6°F above average across the West.” 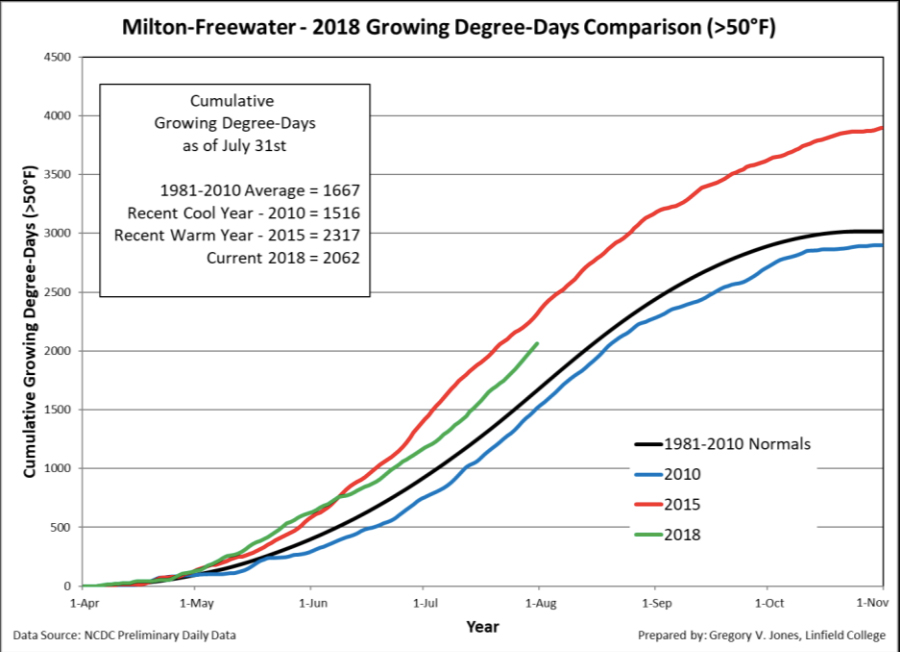 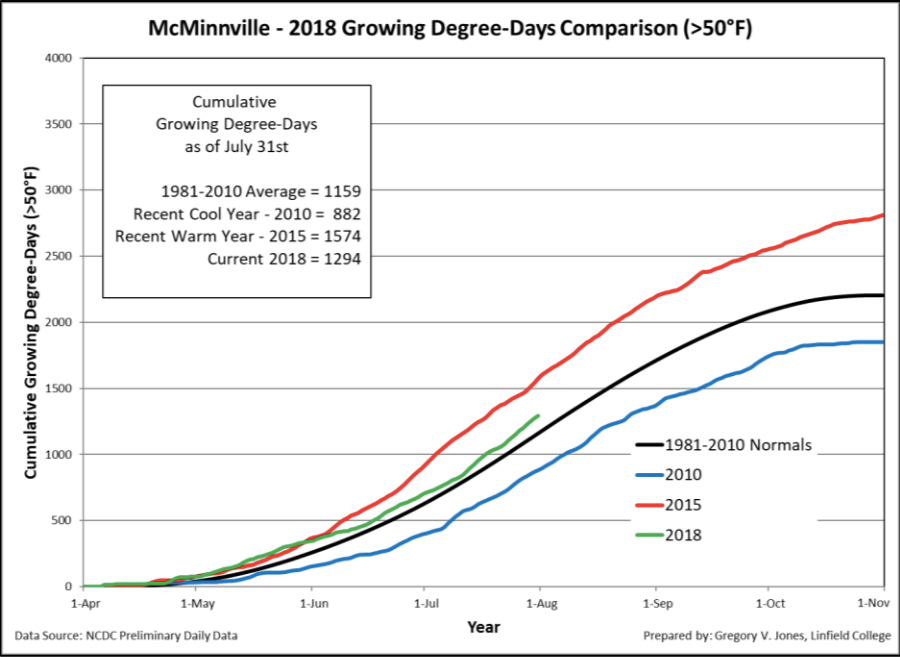 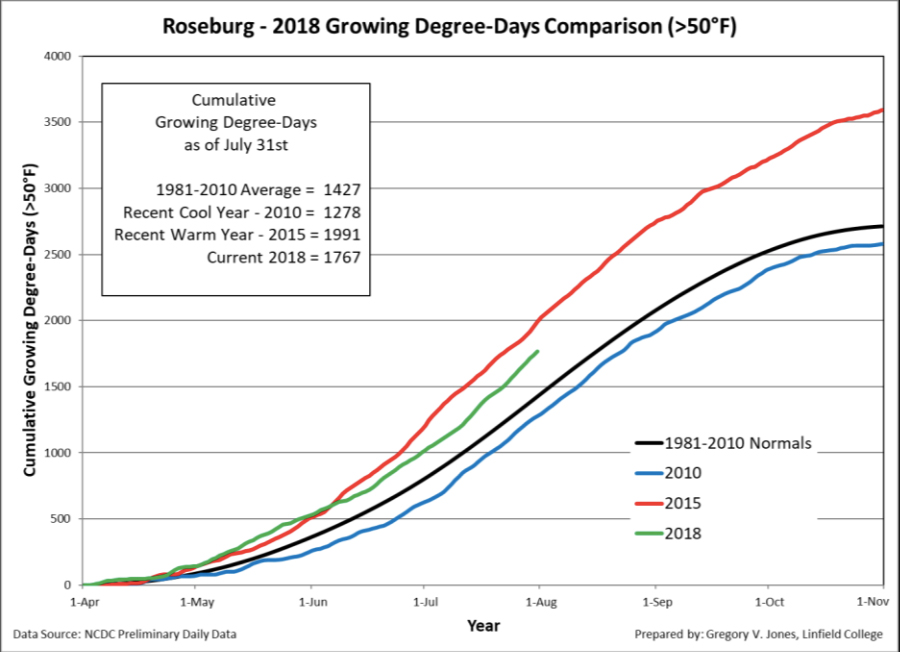 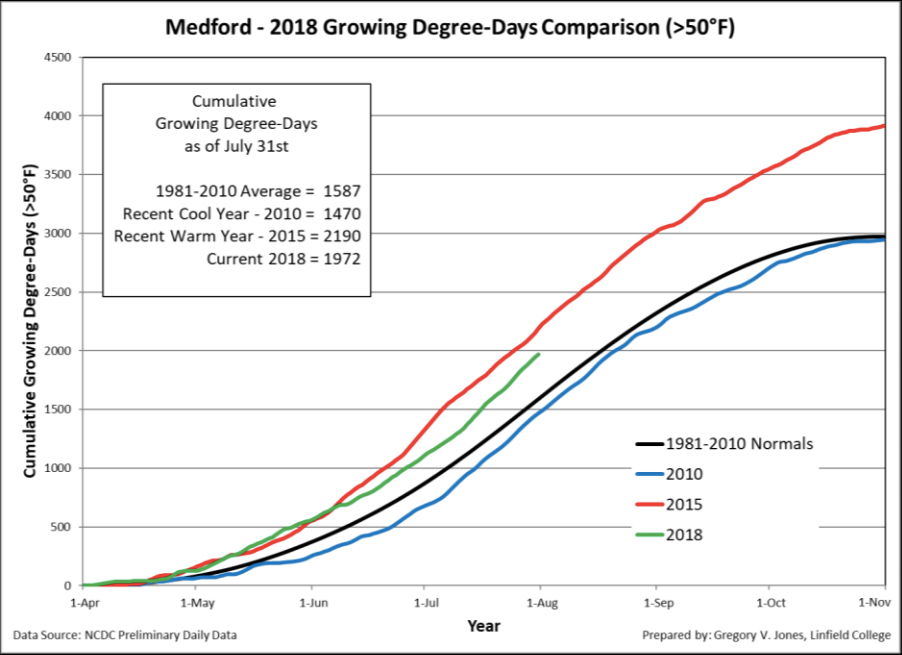 Northwest winemakers often look back fondly upon the 2012 growing season and wines from the 2012 vintage, which now seem moderate by recent standards and the start of the string of warm years that followed the comparatively cool seasons of 2010 and 2011.

“With a record warm July, growing degree-days over the western U.S. are now running largely above the 1981-2010 average (5-30%),” Jones wrote. “Wine regions in Idaho, Washington and Oregon are now running 100-300 GDD units above normal, or two to three weeks ahead of average.”

In McMinnville, the home of Linfield College and the heart of Willamette Valley’s Pinot Noir territory, there were 1,296 growing degree days — just one more last year’s 1,295.

“Heat accumulation amounts for four locations that I have tracked for many years in Oregon are now slightly above average in July due to temperatures that were 2.9-4.3°F above normal,” Jones wrote. “GDD in these four locations are 12-28% above the 1981-2010 normals, 10-15% above the average for the last 15 years, and slightly higher than 2017 for April through July.” 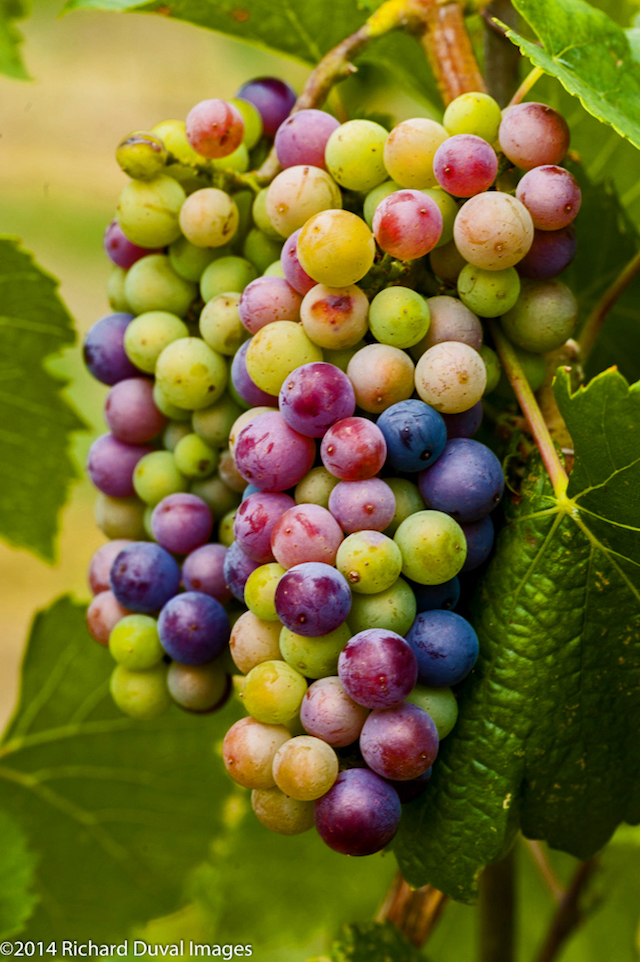 Veraison is well underway in grape clusters, but fruit development will slow in the afternoons this week because vines shut down in preservation mode as the temperature hits 95 Fahrenheit.

And there’s an indication they will get a bigger bump this week. The National Weather Service has issued an “excessive heat watch,” projecting temperatures in the Columbia Valley will reach 107 Fahrenheit in the Tri-Cities and Walla Walla.

Fortunately, there’s been enough precipitation from the current water year to allow vineyard managers with enough flexibility to irrigate when they choose.

“The dry conditions experienced in July added to the current water year deficit throughout much of the west,” Jones wrote. “Much of Oregon and some of southern Idaho and Washington have been 60-90% of normal. Northern Washington and Idaho, Montana and a small area of the northern Sierra Nevadas continue to show 110-200% greater than average precipitation for the water year.”

Jones noted there are some weather models that point to the start of drought conditions in the Northwest.

“The forecast for a drier-than-average end of summer and start of fall in the PNW couples with the U.S. Drought Monitor’s outlook for drought development and persistence in the region,” he wrote. “The US Drought Monitor though the end of October shows some changes, especially in the PNW where drought development and persistence is forecast into the start of fall. 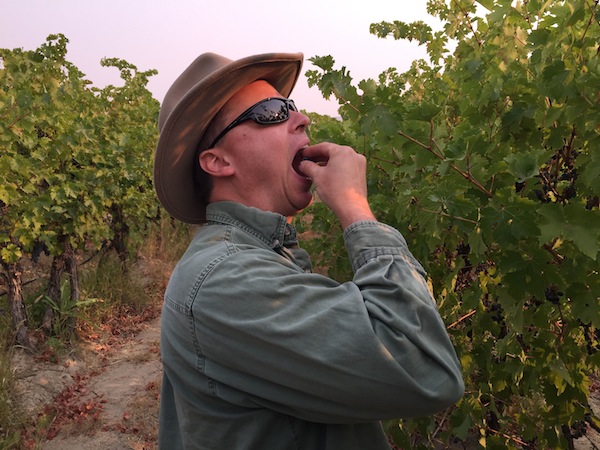 6-10 days: After some relief from the heat early in August (due to a slight shift in the high pressure area over the western U.S.), heat is likely to return over this forecast period. Temperatures are likely to be much above average during this forecast period, and there is essentially no precipitation on the horizon.

8-14 days (valid Aug. 12-19): The precipitation forecast through mid-month shows the PNW remaining dry while the possibility for some southerly flow from monsoon development in the southwest to bring thunderstorms to southern California and into the Great Basin.

30 days (valid Aug. 1-31): The continued warm conditions forecast through mid-month above will likely end up keeping August above average throughout the western U.S. However, there is some indication that the last ten days of the month might bring more moderate (average) temperatures to the west.

90 days (valid through October): The forecast into the harvest period overall looks good for the western U.S. The August-through-October seasonal forecast for is tilting the odds to the majority of the U.S. experiencing a warmer than average tail end of summer and start of fall.