Maryhill Winery of Goldendale, Wash., has announced plans for a satellite tasting room at the Grant Street Pier portion of the $1.5 billion The Waterfront – Vancouver USA project. (Photo by Gramor Development, Inc./Courtesy of R\West)

VANCOUVER, Wash. – The Waterfront – Vancouver, USA is a $1.5 billion development project along the Columbia River that Maryhill Winery will be a player in, Great Northwest Wine has learned.

Maryhill Winery owners Craig and Vicki Leuthold will announce today plans for a 4,890-square-foot tasting room that is expected to open this winter. It will be the second satellite tasting room for the award-winning Goldendale, Wash., winery, which produces 80,000 cases annually.

“It’s more of a hometown for Maryhill in terms of winery recognition because a super-high percentage of our visitors at Maryhill come from Vancouver and Portland,” Craig Leuthold told Great Northwest Wine. “We’re really giving those club members and new customers year-round access. We’ve been looking at that area for a long time.”

“Last December in Spokane we were incredibly busy,” Leuthold said. “Having an urban tasting room provides our customers with more consistent access to the experience and the wines. The opening of the Spokane tasting room has really helped to build our wine club, too.” 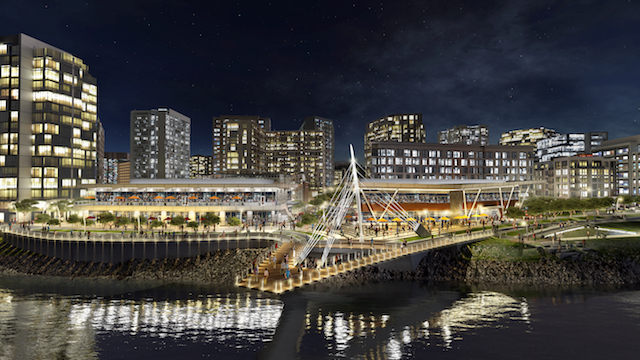 Grant Street Pier will be the centerpiece of The Waterfront – Vancouver USA project. (Rendering by Gramor Development, Inc./Courtesy of R\West)

The Waterfront-Vancouver USA project, a public-private partnership between the City of Vancouver and Gramor Development, Inc., spans 32 acres just downstream from the Interstate 5 Bridge, and the former lumber mill and shipyard will be transformed into a 20-block urban development with 10 acres set aside for Vancouver Waterfront Park.

Plans include 3,300 residential units, 250,000 square feet of retail space for restaurants and shops, and 1 million square feet of commercial office space. Among the participating restaurants will be WildFin American Grill and Twigs Bistro & Martini Bar. Maryhill will be in Block 12 with Twigs, a Northwest-based group that includes four restaurants in the Leutholds’ hometown of Spokane.

“We are very excited about having Maryhill Winery come to The Waterfront,” Barry Cain, president of Gramor Development, stated in a news release. “They make great wines and are one of the fastest growing wineries in Washington. I know visitors will really appreciate being able to try and purchase Maryhill’s wines in the unbeatable atmosphere The Waterfront offers. It’s businesses like this that will make The Waterfront the thriving mixed-use development we’ve envisioned.”

Maryhill’s tasting room will include an outdoor patio that offers views of the Columbia River, Mount Hood and Oregon’s Jantzen Beach. The Grant Street Pier location also will be near an exhibit created by nationally renowned public artist Larry Kirkland, a graduate of Oregon State University, and along the Waterfront Renaissance Trail, the popular 5-mile paved biking/walking path that links with Esther Short Park in downtown Vancouver and Wintler Park.

Opening ceremonies for Vancouver Waterfront Park have been scheduled for Sept. 29. Government officials project more than 200,000 visitors each year, and revenue from city’s 4 percent lodging tax has nearly doubled in the past six years. A number of destination hotels have received building permits.

Woodinville could be next for Maryhill 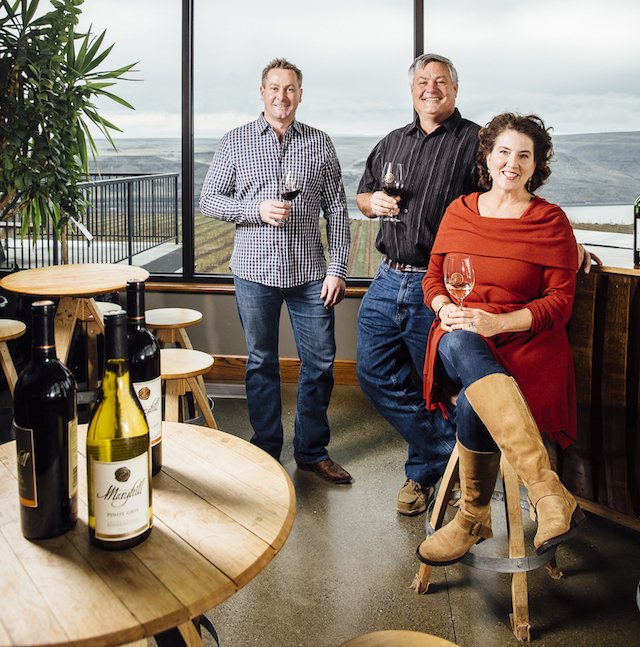 Leuthold said Maryhill’s outline for the future includes a tasting room in the Puget Sound, and he’s optimistic that the Grant Street Pier tasting room will help boost its share in the Vancouver/Portland market. He said Maryhill sales in Spokane grocery stores are up 30 percent since the November 2017 opening of the Kendall Yards tasting room.

“If this works out, we’re still looking for a place in Woodinville or Seattle,” he said. “We don’t really have a presence there, and people don’t come from there to visit the winery.”

The Leutholds opened Maryhill in 2001, and the winery attracts more than 75,000 visitors each year. They work with 12 winegrowers, two dozen of Washington state’s top vineyards and 35 grape varieties to produce 65 types of wine. Wine Press Northwest magazine named Maryhill Winery as its 2015 Pacific Northwest Winery of the Year. Their 53 Platinum Awards rank first among U.S. producers and No. 2 overall in the judging’s 18-year history of Northwest gold-medal winners.

This spring, winemaker/part-owner Richard Batchelor received the Winemaker of the Year trophy at the Indy International Wine Competition, the second time in five years that he’s earned that honor at the judging staged by Purdue University in West Lafayette, Ind.

Since launching the winery, Maryhill has earned more than 3,000 awards, which include Winery of the Year at the 2014 San Francisco International Wine Competition.

“A lot of consumers want to have affirmation of their purchase,” Leuthold said. “They want a third party to say, ‘We thought that this was a gold-medal wine,’ and we’ve found that a wine with a gold medal is lot easier to sell than one that doesn’t have one.

“Remember that the vast majority of U.S. consumers really are still fairly uneducated in the world of wine,” Leuthold added. “For a huge number of people out there, wine is a relatively new beverage for them.”