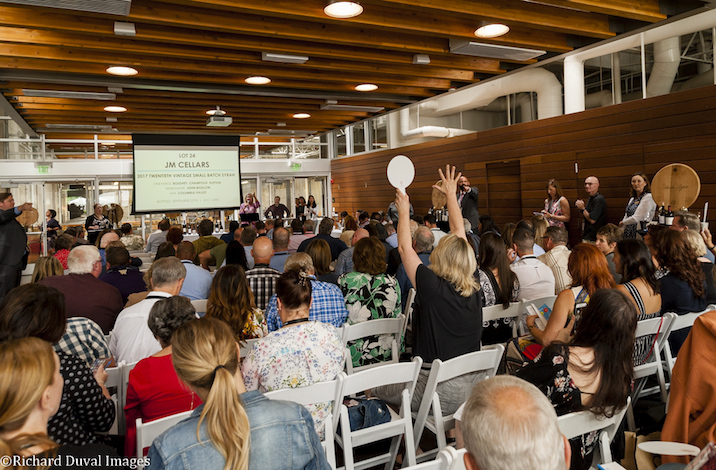 Bidding heats up surrounding a lot by JM Cellars during the 2018 Private Barrel Auction on Thursday, Aug. 18 in Woodinville, Wash., at Novelty Hill/Januik. (Photo by Richard Duval Images)

WOODINVILLE, Wash. – There were lots of winners on Thursday at the fourth annual Private Barrel Auction, but the biggest winner might have been Washington State University, which will receive a record-setting $251,500 for its viticulture and enology research program.

“Amazing!” noted Jamie Peha after wrapping up her second year as director of the Private Barrel Auction. “We almost doubled what we raised last year.”

In fact, that money raised by the 32 lots during the event at Novelty Hill-Januik Winery in Woodinville, Wash., nearly matched the combined total of the first three Private Barrel Auctions. It surpassed last year’s total by 83 percent and means that portion of the Auction of Washington Wines has raised nearly $521,000 for the Ste. Michelle Wine Estates WSU Wine Science Center in Richland.

The most expensive lots were Cabernet Sauvignon made by Leonetti Cellar in Walla Walla and DeLille Cellars in Woodinville, both going for $16,000. 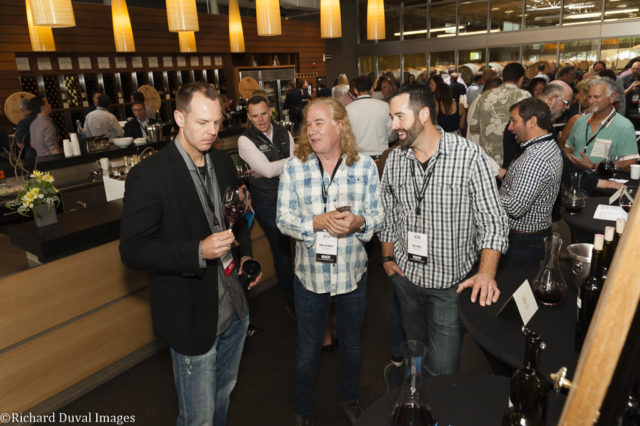 Another purpose behind the Private Barrel Auction is to increase the awareness and profile of Washington state wine. Among the first-time attendees was the Joly family, owner/operators of Capers Café in Portland, Ore.

“We move a tremendous amount of premium Washington and Oregon wine throughout two Portland airport restaurants and wine bars with a third location street side and are always looking for special gems to share with our customers and passengers” Christian Joly said in a news release. “The quality of all the Washington wines we tasted were exceptional, and the hospitality we were shown was top notch … We will definitely be back.”

The Jolys were the top bidders on two of the most expensive lots at Private Barrel Auction. Winning bids ranged from $3,000 to $16,000.

Peha, who spent a decade as marketing and event director at the Washington State Wine Commission, and her team increased winery participation by 55 percent and bidder registration by 50 percent. The average price paid per five-case lot was $7,629, up 13 percent from the prior year, with an average bottle price of $127.

Christina Pearce, buyer for Total Wine & More, has earned her reputation as one of the most active bidders in the U.S. wine industry. Total Wine operates 186 locations in 23 states, which explains why she had the confidence to top this year’s Premiere Napa Valley Auction with her winning bid of $110,000 for a 20-case lot of Silver Oak 2016 Cab.

Ursula Hermacinski, auctioneer for the Napa event, served in the same role in Woodinville, and the vibe within the Washington wine industry seemed to resonate with Pearce.

“At one point, my spotter handed me a bottle and said he was so excited because the winemaker of the lot I had just won was his friend and past student,” Pearce said. “That’s what made the energy in the room so great, the camaraderie and history. This auction will help to make sure we continue to build that in Washington and beyond.” 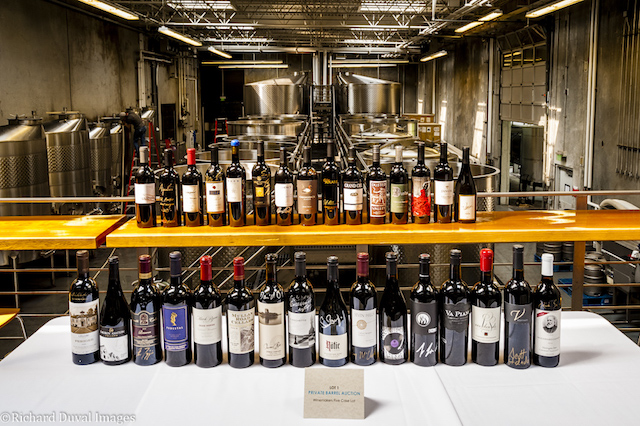 Lot 1, a collection of wines by participating wineries, stands on display for the 2018 Private Barrel Auction on Thursday, Aug. 18 in Woodinville, Wash., at Novelty Hill/Januik. (Photo by Richard Duval Images)

Winning bidders of the top five lots are below: