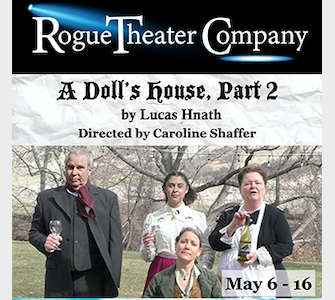 Robin Goodrin Nordli, KT Vogt, Peter Alzado and Hazel James of Rogue Theater Co., star in A Doll’s House, Part 2, which picks up 15 years after Nora infamously slammed the door on her marriage and children, an act that both thrilled and shocked audiences at the time.

Tony Award-nominated comedy-drama (Best Play, 2017), Lucas Hnath’s bitingly funny sequel to Henrik Ibsen’s revolutionary masterpiece unfolds in a series of bristling stand-offs. We see that in Nora’s world, behind every opinion there is a person — and a slammed door isn’t just an end, but also the chance for a new beginning.

Set at the end of the 19th century, but with a decidedly modern perspective, A Doll’s House, Part 2 asks what Nora’s return means to those she left behind. With razor-sharp dialogue, A Doll’s House, Part 2 provokes questions about marriage, gender inequality, and, in often hilarious and insightful ways, the meaning of liberation. Directed by OSF actor Caroline Shaffer.

This production has adult themes/language and runs 90 minutes without intermission.

Friday, May 7 – Opening performance, a benefit for Resolve Center for Dispute Resolution and Restorative Justice, will be followed by wine and talkback with the actors and director.