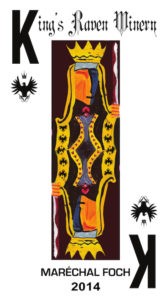 The Ingram family roots in the Willamette Valley began in the 1800s with a Civil War veteran receiving a land claim near Oregon City, and their third-generation farm along New Era Road continues its transition to vineyards. Along the way, they've established a relationship a few miles east with organically farmed Epyllion Vineyard, home to the Maréchal Foch that has become the … END_OF_DOCUMENT_TOKEN_TO_BE_REPLACED

Darrin Ingram's work along the emerging Mount Hood Territory with Epyllion Vineyard is doing more than merely preserving Chelois (shell-WAH), one of the most obscure red grapes in Pacific Northwest. The variety is a story within itself, a living legacy, one of hundreds of hybrids developed in France by 19th century viticulturist Albert Seibel. These crosses propped up the … END_OF_DOCUMENT_TOKEN_TO_BE_REPLACED