Book review: A Carafe of Red 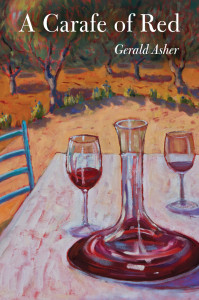 A Carafe of Red is a collection of wine columns and stories written by longtime wine writer Gerald Asher. It was published in 2012 by University of California Press.

A fair bit of wine writing can be rather uninspiring, whether it’s a review of wine one might never taste or a story about visiting a winery.

So it is a true pleasure to read beautifully written wine literature from someone who has visited the great wine regions of the world and provide a journey through words that transport us there, if only for a few moments.

Such is the case with Gerald Asher, author of six books and countless magazine articles during the past half-century.

Asher’s latest book, “A Carafe of Red,” is delicious prose, filled with stories that take us to France, Germany, Italy, Greece, California and Spain.

Asher, who was born in London and lives in San Francisco, has spent his adult life with wine, first as a merchant and later as a writer. In 1972, he began writing wine essays for Gourmet magazine and was named the periodical’s wine editor, a position he held for three decades.

Thank goodness or we might have been deprived of some truly tasteful writing.

(Listen to an interview with Gerald Asher)

In “A Carafe of Red,” Asher takes us on a global tour of wine. Often, we land in classic regions of France and Italy, such as Bordeaux, Barbaresco and Cote-Rotie. But Asher also provides tales from out-of-the-way regions, including Franconia (Germany), Crete and even Santa Cruz in California.

It would be easy for Asher’s stories to devolve into bragging – who wouldn’t want to talk up a vertical tasting with Joe Heitz or a stunning dinner in Burgundy? Instead, he manages to share the joy rather than rub our noses in it.

And that is the key to the success of “A Carafe of Red.” It is truly enjoyable literature, wine writing in a style that would please Truman Capote or John Updike.

You will find not a lick written about the Pacific Northwest, and that’s OK. Drink in the words and appreciate the pleasure they bring.