Book review: A Vineyard in Napa 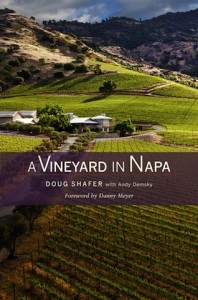 A Vineyard in Napa is the story of the Shafer family and the development of the Napa Valley as a world-class wine region.

When John Shafer uprooted his family in 1973 in Chicago and relocated to the Napa Valley, nobody – including Shafer – figured he would develop one of California’s greatest wineries.

That is the story behind “A Vineyard in Napa,” a memoir written by Shafer’s son, Doug, and co-author Andy Demsky.

By the time the Shafers arrived in Napa Valley, the bad old days of Prohibition finally were behind the state’s wine industry. Robert Mondavi already had been thrown out of the family operation and began his legendary winery in Oakville. Napa Valley was awakening, and John Shafer sensed it. He dragged his wife and children across the country in January 1973 to take over a vineyard. At the time, he had no plans to launch a winery or to help take the small valley to new heights.

In fact, 10 months after his arrival, neighbor Warren Winiarski harvested the grapes for a Cabernet Sauvignon that would shake the wine world to its core, when three years later, the Stag’s Leap Wine Cellars’ 1973 Cab would vanquish the best of Bordeaux in the now-legendary Judgment of Paris tasting.

That John Shafer would choose the Stags Leap District for his new home was fortuitous, as the region in the southern Napa Valley would develop into one of the most distinctive wine-producing regions in the United States.

While “A Vineyard in Napa” tells the odyssey of John Shafer, it is mostly is the story of a father and son and how they built Shafer into a world-class brand focusing primarily on Cabernet Sauvignon. And it is a fascinating look inside the early days of the modern California wine industry that gives us a peek into the personalities and politics of the region.

Perhaps the most interesting chapter is on the development and approval of the Stags Leap District American Viticultural Area, along with the battles and compromises that resulted.

Most of all, “A Vineyard in Napa” is an American success story, and it is a valuable opportunity to see how a legendary winery was built from scratch.

“A Vineyard in Napa” fits right alongside Robert Mondavi’s “Harvest of Joy” in personal histories of the Napa Valley wine industry.