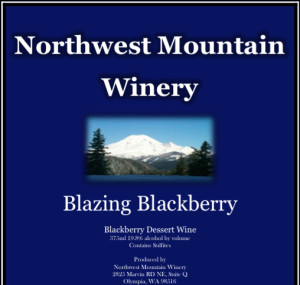 Ohio native Ray Curtis continues to expand production at his winery in Washington’s capital city, growing to 2,000 cases. He started in 2003, but his experience in the industry began three decades ago in the Buckeye State, and nongrape bottlings have been a focus of his from the onset. Local blackberries and local brandy combine to create aromas that include dark plum, chocolate-covered blueberry, Tootsie Roll, cinnamon, vanilla and horehound. Spirits ended fermentation at 9% residual sugar so this fortified wine is not as sweet as some, allowing for rich and juicy flavors of huckleberry and blueberry with fine-grained blackberry skin tannins. Its structure already shows a remarkable integration of alcohol, so the “blazing” reference is a bit misleading, which is a good thing.