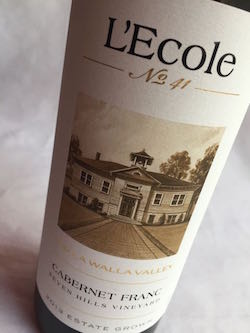 Cabernet Franc, first planted at Seven Hills in 1997, long has played an integral role in Marty Clubb’s high-end Perigee program. A decade ago, in 2006, this Lowden, Wash., schoolhouse began to showcase it as a standalone bottling. During the historically hot 2013 vintage, they began to pick this on Sept. 20 and the average ripeness measured out at a 26.2 Brix for the cropload of 2.6 tons per acre. The L’Ecole program of 33% new French oak for 20 months allows for light toast, sweet barrel spices and caramel with red currant, raspberry and cigar box. There’s just a bit of bramble on the palate, which offers a creamy entry and sandy tannins with Craisins and cassis. The focus remains on the fruit and structure rather than the herbal aspects often found in Cabernet Franc, and it earned a gold medal at the 2016 Walla Walla Valley Wine Competition.