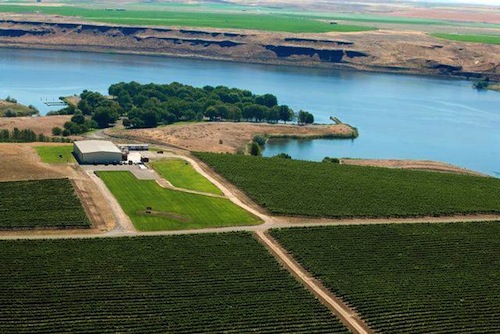 Gordon Estate’s vineyard is set on a bluff above the Snake River near Pasco, Wash. (Courtesy of Gordon Estate)

Jeff and Bill Gordon planted their estate vineyard in 1980 on a bluff overlooking the Snake River northwest of Pasco and launched the winery a few years later. They launched Gordon Brothers Winery in the mid-’80s. Bill retired in the late 1990s, and Jeff bought out his brother.

For several years, Gordon maintained a winemaking facility and tasting room in west Pasco but ultimately closed the tasting room and moved production to a facility at the vineyard.

In 2008, the winery opened a tasting room in the “warehouse district” in Woodinville but closed it in July 2011.

Now the winery is opening a wine bar at the Broadmoor Park outlet mall in west Pasco, conveniently located along Interstate 182. The move comes after two years of working with the mall management and architect Terence L. Thornhill. The goal is to serve wine along with tapas and light appetizers to fill a niche for tourists and locals in west Pasco, the largest-growing area of the Tri-Cities.

The Gordons have hired Loretta Lynn Tucker as the bar manager. She has more than 10 years of experience in the hospitality industry, most recently at the Wenatchee Convention Center. She also ran a wine bar in Leavenworth, Wash.