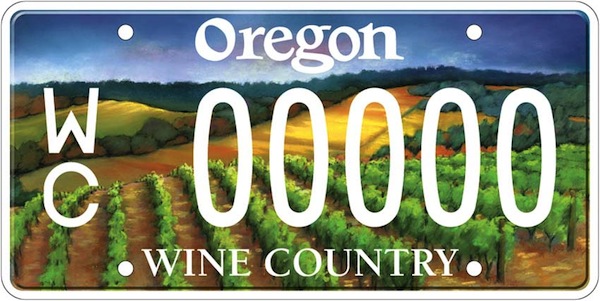 Oregon’s Wine Country license plate, the first of its kind in the country, is the second-most popular plate in the state. (Photo courtesy of Oregon DMV)

PORTLAND, Ore. — Thousands of wine lovers in Oregon drive with pride as they embraced the Wine Country license plate during the first 12 months of the program.

“It’s been a year since Oregon offered the first-in-the-nation wine license plates, and they are proving a hit with Oregon drivers,” Charles Humble, communications director for the Oregon Wine Board, said in an email. “More than 6,000 sets of the specialty plates have been placed on vehicles throughout the state in the first year, making it the second most popular specialty plate in Oregon.”

According to the state’s Driver and Motor Vehicle Services Division, there have been 6,022 of the special Wine Country plates sold. The tribute to Crater Lake National Park remains to be the state’s most popular specialty plate, selling 11,178 in 2012, but the Wine Country plates ranked No. 2, just ahead of the Pacific Wonderland plate on an annual sales basis.

In 2011, the plates were authorized by the Oregon Legislature.

“The popularity of the Wine Country license plates is another indicator of the support that the Oregon wine industry enjoys with the citizens of the state,” said OWB chairwoman Leigh Bartholomew, vineyard manager of Archery Summit and co-owner of Dominio IV Winery in McMinnville “We are flattered and grateful for such a strong showing of support during the first year of sales.”

The Oregon Wine Country plate fees are $54 per set, which includes a $30 surcharge on top of the $24 plate fee. The surcharge is due at every renewal. Net proceeds from the Wine Country license plate program are earmarked to support the state’s tourism and culinary efforts.

Oregon’s tourism agency, Travel Oregon, administers the grant program which will open in spring 2014. Details of the grant opportunities will be posted on Industry.TravelOregon.com later this year.