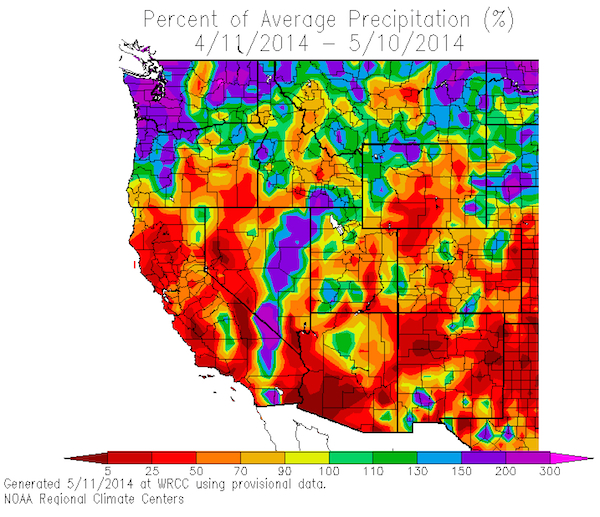 Recent precipitation levels were below normal throughout portions of the West Coast. (Western Regional Climate Center)

The Pacific Northwest wine industry toasted Mother’s Day, and weather researchers are predicting growers can breathe a sigh of relief as the annual day of family celebration marks the unofficial end of frost season.

Now it appears Mother Nature will be turning up the heat this week in Washington’s Columbia Valley and Southern Oregon, where temperatures are expected to reach 90 degrees Fahrenheit on Wednesday.

“The recent reprieve from the heat will end abruptly next week, as a summer-like ridge of high pressure builds into the region,” Gerrit Hoogenboom, director of Washington State University’s AgWeatherNet, wrote in a news release.

Next week, the eight- to 14-day outlook ending May 23 is for above average temperatures as near-to below-average precipitation is expected for Northwest vineyards.

Southern Oregon University’s Greg Jones, one of the globe’s top climatologists for the wine industry, indicated this week’s weather is continuing the trend.

“Again, as we transition into summer, all evidence continues to point to a warmer and drier-than-average season across the West,” Jones said in his recent report.

Historically, normal conditions for the middle of May in Washington wine country would be for highs in the mid- to-upper 60s with lows in the low 40s, according to WSU.

In looking back to last month, April temperatures were 1 to 6 degrees warmer than normal for many parts of the West Coast, Jones noted.

Jones, recently promoted to the Ashland school’s director of Business, Communication and the Environment, also issued his first series of growing degree-day charts.

“For those in Oregon, our first month of growing degree-day numbers (April) started mixed with values above 2013 in Southern Oregon and lower than 2013 in Northern and Eastern Oregon,” he wrote. “Compared to the 2004-2013 period, April started off near normal in McMinnville to 50-75% of normal in Roseburg and Medford. 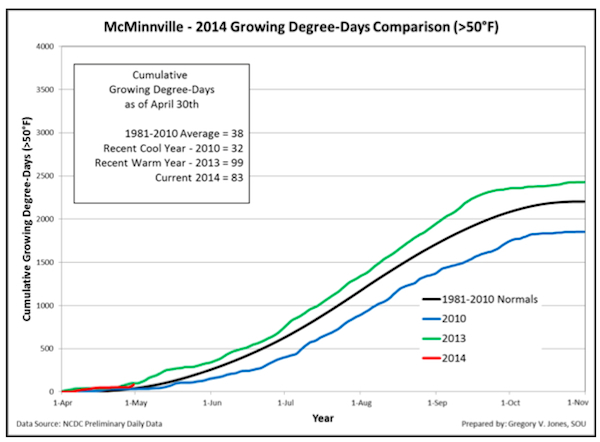 “Compared to the 1981-2010 climate normal growing degree-day numbers all four locations are above normal, with Medford seeing nearly twice as much as normal,” Jones noted. “Station precipitation in Oregon showed that winter (November through March) was 20-50% down, with some recovery in the second half of the winter resulting in just below normal (Roseburg -6% and Milton-Freewater -10%) to above normal conditions (McMinnville +6% and Medford +18%).” 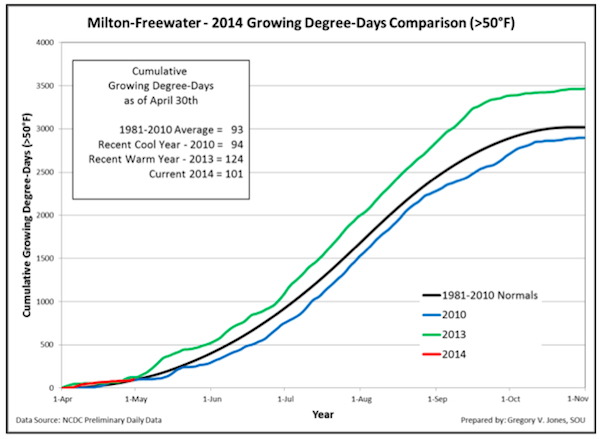 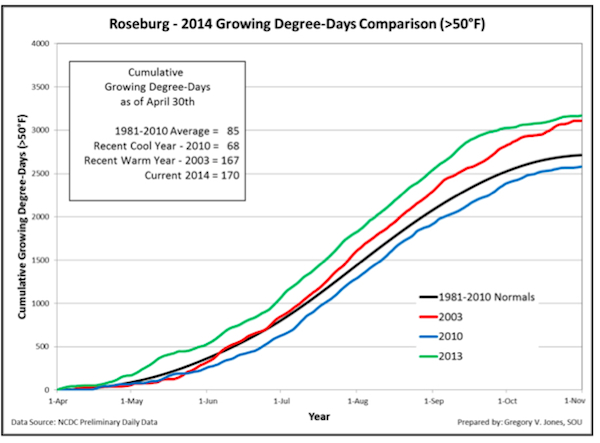 The final winter season snowpack data for the West Coast showed improvement in the Washington Cascades, but there’s been little relief for Oregon and California, he wrote.

“Oregon conditions show moderate to severe drought in the south and abnormally dry conditions in the north,” Jones said. “Washington continued to see the most improvement in drought conditions, but is still abnormally dry on the east side of the Cascades.”

That means many in the West will continue to follow the U.S. Drought Monitor and the Climate Prediction Center forecast this summer.

“The longer term forecasts continued to be bolstered by the fact that North Pacific sea surface temperatures remain warmer than they have been for few years now,” Jones wrote. “The tropical Pacific continues its transition from La Nada toward El Niño, but there remains uncertainty as to exactly when El Niño will develop and an even greater uncertainty as to how strong it may become.

“If the El Niño conditions do materialize later this year, the western US would typically see a transition to a wetter and warmer California and a drier/warmer PNW. The timing of the onset is important for the western US, with any impact likely being pushed into the post harvest period.”