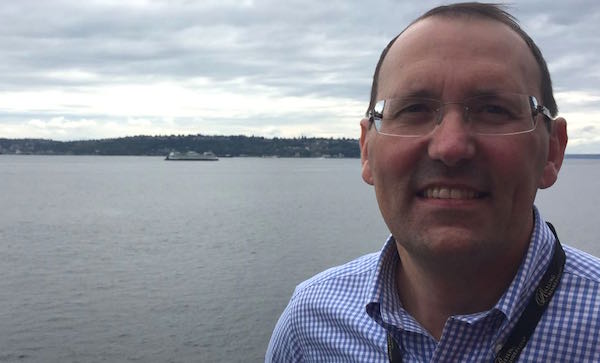 Nicolas Quillé is the winemaker and general manager of Pacific Rim Winemakers. He oversees the production of about 170,000 cases of Washington Riesling. (Photo by Andy Perdue/Great Northwest Wine)

SEATTLE – For Nicolas Quillé, coming from France’s third-largest city to one of the Pacific Northwest’s largest Riesling producers has been quite a journey.

And it’s far from over.

Quillé, born and raised in Lyon, is the head winemaker and general manager for Pacific Rim Winemakers in the heart of Washington wine country. While he hasn’t always focused on Riesling, his love for the world’s greatest white wine runs deep.

He has twice worked in the California wine industry, and now he’s on his second stop in Washington wine country.

Quillé also may well be the most-educated person in Washington wine, as he holds four degrees – including three master’s – and now is pursuing the extremely difficult Master of Wine certification.

We recently caught up with Quillé in Seattle during the Riesling Rendezvous to talk about his life in wine. Here’s the interview:

A Frenchman comes to the New World 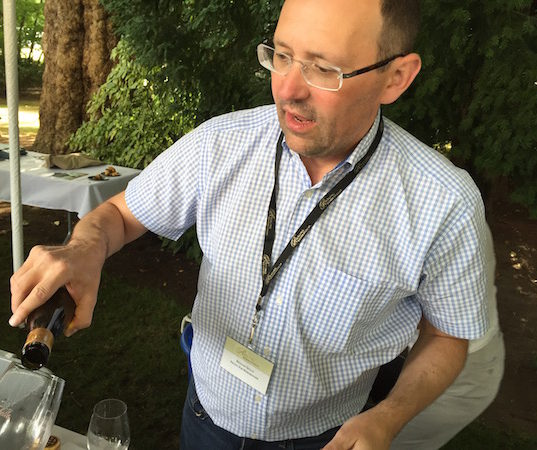 Quillé comes by wine naturally. His parents owned a restaurant and small wine wholesale business in Lyon. And both his father and grandfather represented Trimbach, one of Alsace’s oldest and most famous Riesling producers.

“I think I’ve been a closet Riesling lover for a long time,” Quillé told Great Northwest Wine. “We drank a lot of Alsatian Riesling when I grew up.”

Soon after, he came to the United States, where his first stop was at J. Lohr on California’s Central Coast. He then moved up the West Coast to Washington, where he headed up Hogue Cellars‘ burgeoning red wine program. When Quillé arrived in 1998, the Yakima Valley winery was producing about 50,000 cases of red wine. Within six years, it was making in excess of 200,000 cases.

“It was the beginning of a lot of things,” he said. “The red wine program was growing fast. The state as a whole was switching from a white wine state to a red wine state.”

As Hogue focused on producing lower-priced reds, it searched for ways to reduce its costs while also crafting delicious, fruit-forward wines. It turned to a French technique called micro-oxygenation, in which tiny gas bubbles are released through a tank of wine. The computer-controlled release helps soften tannins and make young reds more approachable.

“We were one of the first in the country to deploy it,” Quillé said.

To California and back 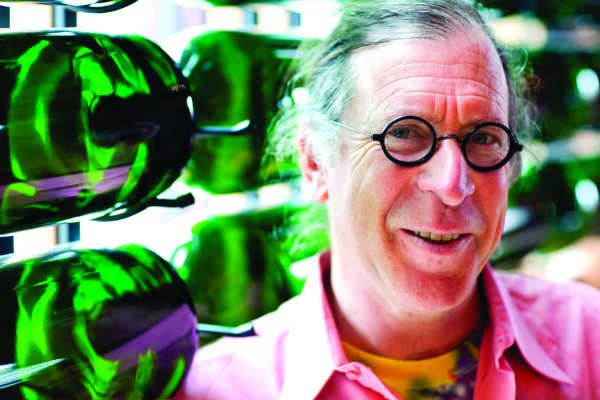 Randall Grahm is the founder of Pacific Rim Winemakers. He started the Riesling-centric winery in 1992 and sold it in late 2010. (Photo by Sara Remington/courtesy of Bonny Doon)

By 2003, the Hogue family had sold its winery to Vincor International, which then was sold to Constellation Brands. For Quillé, Hogue was no longer the right fit for him.

“I was not well-equipped for the corporate world,” he said. “So I went back to school.”

Quillé went to the University of Washington in Seattle and earned an MBA. Then he met Randall Grahm, one of California’s most brilliant – and eccentric – winemakers. Grahm owns Bonny Doon in Santa Cruz, and he asked Quillé to come work for him as general manager.

“At the time, it was a fairly large family business – about 450,000 cases of wine – and I thought it was a good opportunity. So my family and I packed our bags and moved from Richland, Wash., to Santa Cruz, Calif.”

At Hogue, Quillé’s job was calculated and scientific. At Bonny Doon, it was quite the opposite.

“Things are a little more intuitive with Randall,” he said. “It was refreshing to go to California to get back into the French side of my brain and experience the philosophy I was raised on. I go back and forth often between scientific and more emotional winemaking. I think that’s where Randall lies, on the emotional side.”

After Quillé arrived, Bonny Doon went through several changes. It sold off two of its larger brands, Big House and Cardinal Zin. That left it with Bonny Doon and a little project called Pacific Rim.

Grahm started Pacific Rim in 1992, when little Riesling was left in California. As a result, a lot of grapes were brought in from Washington, Oregon and even Germany.

“It was kind of a wide Pacific Rim, I guess,” Quillé said with a smile. 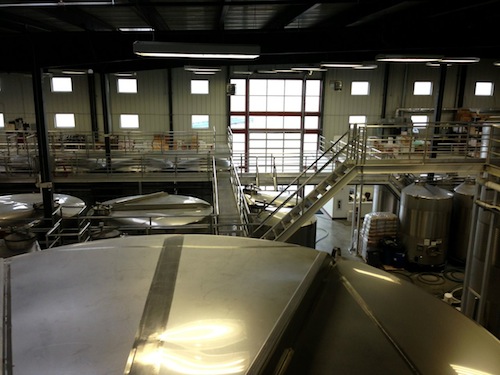 With 140 acres of Riesling under contract in Washington, it made perfect sense to move Pacific Rim to the Northwest.

“I told him I would like to take the brand up north,” he said. “I thought there was room for a Riesling-only brand. So in 2006, we packed our bags, moved back up and built a winery in West Richland.”

The Pacific Rim winemaking facility is on the backside of Red Mountain, strategically within 45 minutes of all its vineyard sources and near the Tri-Cities, a community of a quarter-million people.

Quillé and his team quickly ramped up production from about 50,000 cases to nearly triple that. Today, Pacific Rim is 170,000 cases of wine – of which 95 percent is Riesling.

In late 2010, Grahm sold Pacific Rim to the Mariani family of New York, which owns Banfi Vintners, a large Italian wine importer. Mariani was looking to diversify its portfolio, and Pacific Rim fit perfectly into that plan.

Today, five brands are made at Pacific Rim, including Rainstorm (Oregon Pinot Noir and Pinot Gris) and Sweet Bliss (sweeter wines sold in the South). Total production stands at about 220,000 cases, the vast majority of which is Pacific Rim Riesling. 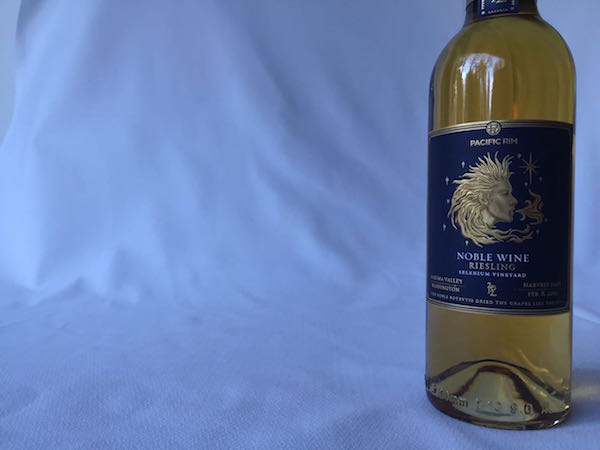 Noble Wine, a dessert Riesling made in the style of a German trockenbeerenauslese, is one of the 11 Rieslings produced by Pacific Rim Winemakers. (Photo by Andy Perdue/Great Northwest Wine)

Quillé is a certified Riesling zealot and makes no fewer than 11 different Rieslings at Pacific Rim.

“I’d like to make more, but I can’t,” he said. “My sales people tell me it’s difficult enough to sell 11 Rieslings.”

Not unlike Oregon Pinot Noir producers that will make a half-dozen or more vineyard-designated wines, Riesling also lends itself to different styles.

Just by dividing styles of Riesling by sweetness and acidity, it would be easy to make six or seven distinctively different styles, Quillé explained. On top of that, came a sparkling version, two or three dessert wines and a couple of vineyard-designated Rieslings.

Well, they add up quickly.

A decade ago, Riesling was one of the fastest-growing sectors in the American wine market. But the deep recession hurt all wine sales, then the Moscato craze cut into Riesling’s market share.

Today, Riesling sales seem to be coming out of their funk. Quillé says Pacific Rim is growing in the low single digits each year, which he points out is far better than it was doing just five years ago. And that’s much better than German imports, down about 10 percent in sales.

“I’d love to see more of our wines in the Northwest,” he said. “Our No. 1 state is California.”

That is followed by Texas, Illinois and New York. In fact, Washington doesn’t crack Pacific Rim’s top 10 states for distribution, which Quillé ruefully describes as “a great opportunity for growth.”

Next step: Master of Wine

As if four college degrees weren’t enough, Quillé now is pursuing one of the most difficult degrees in the world of wine.

“I think I have a disorder of some sort where I like to study,” he said with a laugh. “Not really to show off, it’s just really interesting for me to study.”

Quillé already is well versed in technical winemaking, and he’s strong on the business side. So that leaves him with a new direction.

So instead, he’s putting himself through a grueling multi-year study he hopes ultimately will lead to him earning the Master of Wine certification through the Institute of Masters of Wine in London.

Bob Betz, founding winemaker for Betz Family Winery in Woodinville, is Washington’s only winemaking Master of Wine. He is one of the few winemakers in the world with that distinction. Most MWs work as retailers, writers, educators and restaurateurs.

Quillé is in his third year of study, and he believes he’ll need another year to pass all the tests that cover the theoretical and practical sides of the wine business.