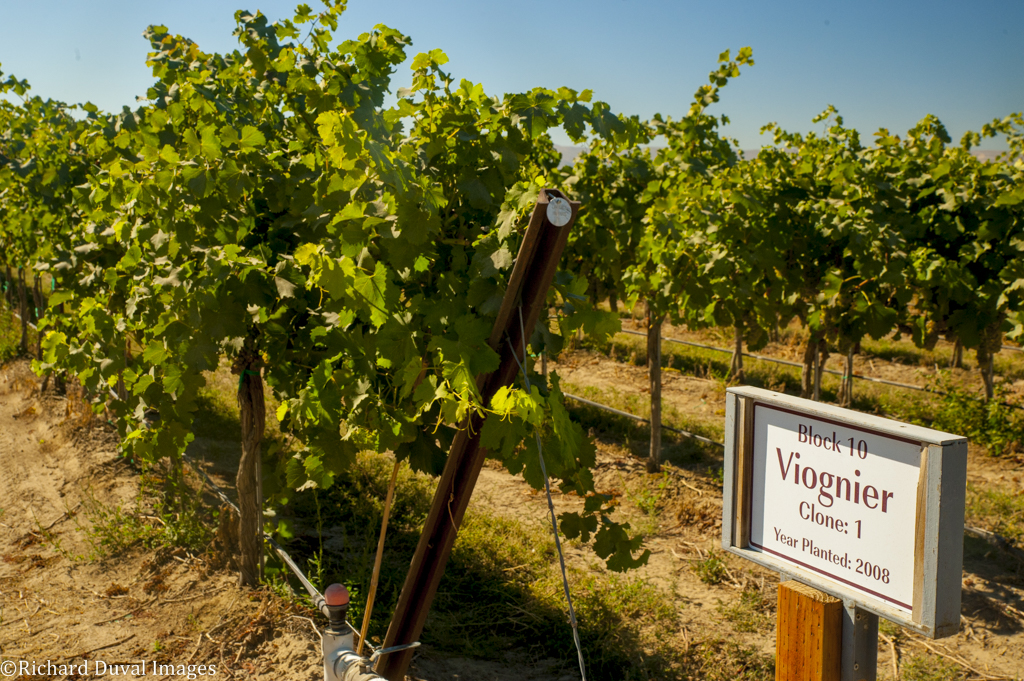 Viognier grapes within Lawrence Vineyards are on the Royal Slope in the Columbia River Valley. (Richard Duval Images)

Viognier, the noble white grape of the northern Rhône Valley of France, has started to gain a strong foothold in the Pacific Northwest, rolling in on the wave of interest in Rhône varieties in our region.

It’s a maddeningly difficult grape to grow and often more difficult to craft into wine. However, it can make some gems in the Pacific Northwest. It is most famous in the Condrieu district of the Rhône, where it almost went extinct in the 1960s.

“I like all the iterations in Washington, which are all over the map — bone-dry, some Chardonnayesque with malolactic and oak — and that’s one thing that has confused consumers a bit,” said Maryhill Winery co-owner Craig Leuthold. “There’s not one style that our industry has taken to. I’m not fond of the California style of Viognier, which is so phenolic that it’s almost musky and too rich in flavor for people to take serious. I think Washington could take it some place.”

Maryhill, the showpiece winery on the edge of the Columbia Gorge, has positioned itself to make that statement. Richard Batcehlor, Maryhill’s winemaker with a Midas touch, produced nearly 8,300 cases of Viognier from the 2016 vintage. No other producer is even close.

“It’s our second-largest production wine, and our demand has grown 38 percent in the last year, which was almost what rosé has been for us,” Leuthold said. “A lot of people had planted it in Washington, but nobody really has been doing much with it, so we’ve been able to find Viognier without any problem.”

At this point, Chateau Ste. Michelle offers a single example of Viognier, a production of 1,100 cases with sales limited to its tasting room and website. Maryhill remains bullish on it beyond its original Goldendale showpiece tasting gallery and new satellite tasting room overlooking the Spokane River in the heart of Leuthold’s hometown.

“We’ve sort of created a market for this in the Northwest,” Leuthold said. “It’s one variety that hasn’t yet hit the mainstream, and we enjoy the way it offers a nice balance of fruit and tartness.”

Today in Washington state,  about 2,000 tons are harvested annually, ranking sixth among white grapes and catapulting it past longer-established varieties Sémillon and Chenin Blanc. Just to the north in British Columbia, there were 630 tons of Viognier harvested in 2015, which ranked seventh among white wine grapes. That same vintage saw Oregon pull in 688 tons of Viognier.

Much of what Maryhill needs — Gunkel Vineyard — is within view of the winery, but they also bring in Viognier from Tudor Hills in the Yakima Valley and the Andrews family sites in the Horse Heaven Hills, Coyote Canyon and McKinley Springs.

Of course, not all that tonnage goes exclusively to making bottles labeled as Viognier. Some is blended with other Rhône varieties such as Roussanne and Marsanne or other white wines. Viognier also is co-fermented with Syrah, adding color and some citrus hints for a more complex wine.

“I’m fond of having it with Chicken Alfredo or smoked salmon fettuccine — something with a creamy sauce,” Leuthold said. “The creaminess of the wine in the midpalate with the butter really seems to complement each other.”

Here are several examples of Viognier we’ve tasted recently. Ask your favorite wine merchant for them or order them directly from the winery.