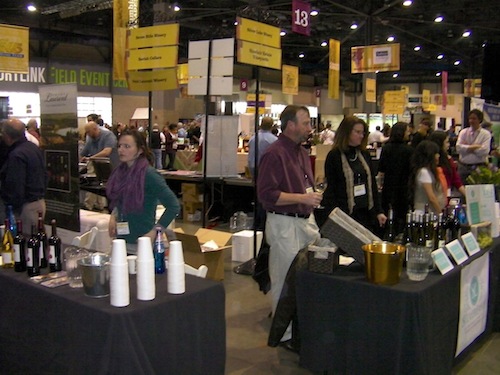 The good news: All but six bottles have been found, and surveillance camera footage revealed nothing.

“We find zero evidence of theft on the surveillance video,” said Chris Stone, vice president of marketing and communications for the Washington State Wine Commission.

Stone said the entire commission staff has spent the past two days investigating all reports of theft at Taste Washington.

After this morning’s report by Great Northwest Wine, Brian Carter Cellars in Woodinville noted that 22 bottles of wine went missing. Those bottles were discovered in a secure area, Stone said, and returned to the winery.

“The cleaning crew is told to recycle all empty bottles,” he said. “Then we secure all unopened bottles.”

The bottles had been taken to the secure area inside the CenturyLink Field Event Center.

Stone added he had a long list of wineries that had wine left after the event.

He said only six bottles of wine are now unaccounted for, and the wine commission is relieved the surveillance footage showed no theft. Steve Warner, executive director, met today with owners from Alexandria Nicole Cellars in Prosser about the bottles they reported missing.

Two wineries – Goose Ridge and Proletariat – reported losing large-format bottles that were used for display purposes. Stone believes they might have been picked up by accident and recycled, but he is still investigating. He added that the display bottles were left on the pouring table, which might have confused the cleaning crew.

Stone said the wine commission plans to reimburse the wineries for the display bottles.

He said that a hand-painted galvanized tub owned by Cox Canyon Vineyards in Ellensburg might have been picked up along with other similar dump buckets and either put into storage or taken to another winery’s table.

“There’s a decent chance it will be recovered,” he said.