The Seattle Times has changed its wine coverage, adding Maggie Savarino and Andy Perdue as new columnists. (Photo via Flickr/click for credit)

The Seattle Times, the leading news organization in the Pacific Northwest, announced Andy Perdue and Maggie Saravino as its new wine columnists on Friday.

Perdue created Wine Press Northwest, a quarterly lifestyle magazine, in 1997 and served as its editor-in-chief during his 23-year career with the Tri-City Herald in Kennewick, Wash. He resigned in December to devote his journalism career to documenting the Pacific Northwest wine industry and now serves as editor and publisher of GreatNorthwestWine.com and Wine News Service. His first book, The Northwest Wine Guide: A Buyer’s Handbook, was published by Sasquatch Books in 2003.

Savarino’s resume includes writing the “Search & Distill” column for Seattle Weekly. She’s been a part of Seattle’s restaurant and beverage industry for two decades, and her 2011 book, The Seasonal Cocktail Companion: 100 Recipes and Projects for Four Seasons of Drinking, also was published by Sasquatch.

“I’ll be writing one column per month,” Perdue said. “I’ll also be writing feature stories for Pacific Northwest magazine. Maggie will be writing three columns per month, and she and I will share some feature writing duties. We’ll be figuring who is going to write what for the next six months or so.”

Their column in Pacific Northwest magazine will be called The Grapevine, but Perdue also will be contributing features stories and, on occasion, business or news stories.

“Last month, I wrote Mike Dunham’s obituary, which sadly was my first piece for The Times,” Perdue said.

The Grapevine column replaces The Wine Adviser, written by Paul Gregutt for the past 11 years. Gregutt’s predecessor was the revered Tom Stockley, who died in a commercial airline crash off the coast of Port Hueneme, Calif., in 2000. Stockley’s column on the Pacific Northwest wine industry spanned four decades.

“It is an incredible honor to write for The Times,” Perdue said. “It is a great institution. Following in the footsteps of Tom Stockley – the original Northwest wine journalist – is humbling. I never got to meet Tom – I spoke on the phone with him once – but everyone who knew him talks about how humble, kind and fair he was. I hope to honor his memory with my coverage of the wine industry.”

Perdue grew up in the Puget Sound port of Bremerton and has spent nearly all his life in the Pacific Northwest. The Western Washington University graduate is a third-generation newspaperman, with his late father, Ed, serving as his biggest driving force. 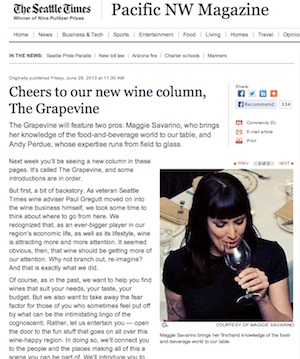 “I really wish he was still around to see my byline in The Times. I think he’d get a kick out of it,” Perdue said. “And I would be remiss if I didn’t talk about Bob Woehler. He was the Tri-City Herald’s longtime wine columnist, and he undoubtedly nudged me in the direction of wine writing back in the 1990s. He was supportive of everything we set out to do, and he was a good friend.  I wish Bob was around to see this. We lost him two years ago.”

Two wine writers who have helped shaped Perdue’s career also spent much of their careers in newspapers in California – Santa Rosa columnist Dan Berger and former Sacramento Bee columnist Mike Dunne. Perdue also credits one of his college newsroom chums, Ron Judd, for making his introduction to editors at The Seattle Times.

“Ron has been one of the Northwest’s top journalists for the better part of three decades,” Perdue said. “Back when he was working for the Bremerton Sun, he was even nominated for a Pulitzer. He’s now enjoying writing features and outdoor columns for Pacific Northwest magazine and The Times. It’ll be an honor to share the same space with him again.”

Taking a journalistic approach to judging wines continues to be a hotly debated issue in the wine industry. James Laube, senior editor at Wine Spectator, wrote a column that appeared in the June 2013 print edition on why his publication conducts blind tastings for its reviews.

“Blind tasting is a costly and time-consuming endeavor,” Laube wrote. “But for wine professionals who recognize the importance of not knowing what wine they’re reviewing, there are no shortcuts.”

Perdue agrees, and he’ll continue to apply that same approach to his coverage for The Seattle Times.

“I’ve long believed that looking at the label or tasting with the winemaker or owner taints your palate,” Perdue said. “As my buddy Coke Roth likes to say: ‘It always tastes better when you’re with the winemaker.’ ”

An experience in 2000 with a Riesling made by famed German producer Ernst Loosen – in partnership with Chateau Ste. Michelle – proved to Perdue the value in blind tasting.

“The first vintage of Eroica came out, and we were drinking it at a birthday party,” Perdue said. “It was fabulous, and several of us were geeking out on it and its price – $20, which was astonishingly high for a Riesling back then.

“A week later, we conducted a blind judging of Northwest Rieslings,” he continued. “We had 50 examples, and I was convinced the Eroica was going to finish No. 1 based on our experience the week prior. It finished No. 25. That convinced me that I should always taste blind when rating wines, so I have ever since. I will add that this is the way I choose to conduct my tastings, and it’s not up to me to decide how others do things. But it’s always important to be transparent about how you work.”

Coincidentally, Perdue’s first contribution to The Grapevine will be published Sunday, July 14, which is the opening day of the Riesling Rendezvous at Chateau Ste. Michelle in Woodinville, Wash.

“I’ll give you one guess what it will be about,” Perdue chuckled. “I hope to take my column in a little different direction, writing about unexpected experiences that Northwest wine lovers can enjoy. I also plan to write profiles on interesting people in this industry. Wine is a beverage, a gift of nature. What makes it particularly interesting is the story behind it, and that’s what I love sharing.”