Gov. Jay Inslee is the first to break ground Thursday on the Wine Science Center at the WSU Tri-Cities campus in Richland. (Photo courtesy of WSU Tri-Cities)

“Today, we’re celebrating a great marriage of two things we believe in in the state of Washington,” Inslee said. “We believe in wine, and we believe in science. And with the marrying of those things here today, we’re going to grow the Washington wine economy like nowhere else on the planet Earth in the next two decades. You can count on that. That’s going to happen.”

Construction is scheduled to be completed in early 2015, and two Spokane companies are in charge of the project – Lydig Construction and ALSC Architects. 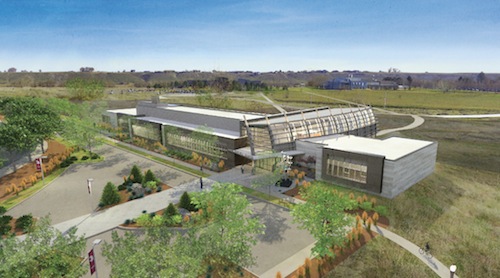 “Every great wine region in the world has a signature institution that supports the wine industry with research,” Baseler said. “And now we do, too.”

More than $19 million has been raised. The state Legislature budgeted $5 million for the Wine Science Center in 2012, while the state’s winemakers and grape growers are funding nearly one-third of the project by pledging $7.4 million.

“When I talk and I evangelize and shout from the rooftops, I say, ‘If we’re this good in 30 years, how great can we be in the future?’ ” Warner said. “And that’s what this day is all about. The WSU Wine Science Center will take the entire industry to new heights.”

The assessment on grape growers is $2 per ton, while producers will pay two cents per gallon of wine.

“When we talk about what the industry believes and how important the Wine Science Center is, we’re talking about local research that meets the needs of every wine grower and wine producer in the state of Washington,” Warner said. “That’s why we believe in it so much.” 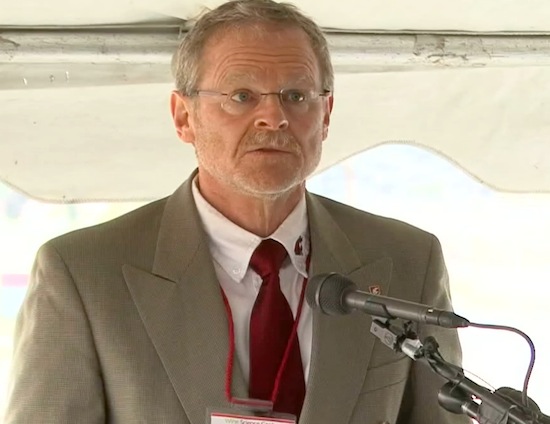 Baseler said a 2008 survey of wineries and growers indicated a need for 17,000 trained workers in the wine industry. That figure helped build momentum for the Wine Science Center, and a critical move was creating the endowment that led to the 2009 hiring of Thomas Henick-Kling as director of WSU’s viticulture and enology program.

“We succeeded in hiring our top choice of candidates,” said Baseler, a WSU graduate who also serves on the school’s Board of Regents. “Once we hired Thomas, the vision really took shape.”

Henick-Kling, a world-renowned researcher in the field of fermentation, spent more than 20 years at Cornell University developing the Ivy League school’s V&E program.

“It’s very exciting to be here today,” Henick-Kling said. “I need to thank so many people who made this happen.”

The native of Germany earned his doctorate in Australia and received a master’s degree from Oregon State University.

“And he has an undergraduate degree from Eberhard Karls University in Germany. I understand they have a good football team, but not as good as the Cougars,” Baseler said to applause and laughter.

Henick-Kling later joked, “I had had a few Washington wines before, even when I lived in Oregon.”

“This new facility is going to serve as a hub for our students, researchers and for industry, developing our collaborative programs,” Henick-Kling said. “The Wine Science Center will have key research labs in the basic sciences, chemistry, plant physiology, microbiology, sensory evaluation and a teaching winery.”

H. Keith Moo-Young, WSU Tri-Cities Chancellor, said “This Wine Science Center will be a world-class, state-of-the-art research facility which will be a partnership between Washington State University’s Tri-Cities campus, Washington State University’s Pullman campus, fellow researchers in Prosser and a partnership with the College of Agricultural, Human and Natural Resource Sciences at the Pullman campus.” 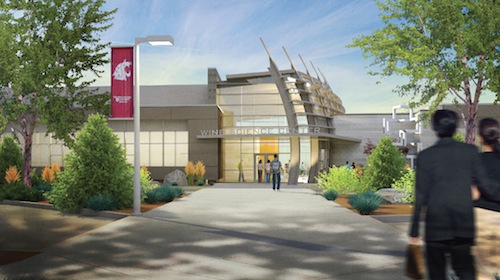 Richland is in the heart of the Columbia Valley and is expected to be central to wine industry research, development and education. The Washington wine industry contributes $9 billion annually to the state’s bottom line, a figure expected to more than double by 2020.

In Benton County, where the Wine Science Center is being built, the wine industry is home to large producers such as Columbia Crest, Chateau Ste. Michelle’s Canoe Ridge facility, Hogue Cellars, Pacific Rim Winemakers, Hedges Family Estate, Barnard Griffin and Kiona Vineyards and Winery. It contributes $1 billion to the county’s economy annually and is responsible for 5,200 jobs and $43 million in state and local taxes.

Earlier this month, Stacie Hamilton of Hamilton Cellars in Richland pledged $100,000 to the project.

Inslee pointed out that anyone who uses Interstate 90 to cross the Cascades, takes Interstate 82 to access Red Mountain or travels from the Tri-Cities to Walla Walla benefits from the state’s acclaimed wines.

“We’ve got to improve our transportation system, and we’re now working in a bipartisan fashion to try to have this as a vision – of people driving over an improved Snoqualmie Pass on I-90, getting off at the new Red Mountain interchange, getting here and going to Walla Walla with improvements on Highway 12,” Inslee said.

Ceremony organizers did their best to deal with cool, rainy and breezy conditions, an unseasonal mix for the Columbia Valley during September.

“I look at these Cougar flags blowing in the Washington wind – red and white, the colors of the best wine that we make right here in Washington state,” Inslee said. “I don’t think that’s what they were thinking when they designed the Cougar flag, but that’s how I think of it.”

However, the weather may have enabled a few more winemakers and grape growers to take a break and witness the groundbreaking, which drew more than 200 people.

“In fact, this is not the perfect climate for wine today,” Baseler joked, making a reference to the Washington State Wine Commission’s slogan.

It is football season, though, and that was not lost on the governor with WSU playing Saturday at CenturyLink Field as part of the Pullman school’s fifth annual Seattle Week.

“This Saturday night, I fully intend to be toasting a victory by the Washington State Cougars over the Stanford Cardinal with Washington wine – the best wine in the world!” Inslee said to an ovation.