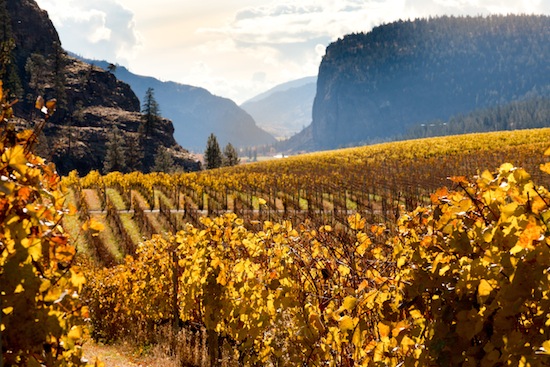 McIntyre Bluff is within sight of some of the finest vineyards in British Columbia’s Okanagan Valley. (Photo courtesy of BC Wine Institute)

“Our wine industry contributes more than tourism revenue and jobs – it’s a source of pride,” BC Premier Christy Clark said in a news release. “Festivals like this are a great way to highlight some of the Okanagan’s and the world’s best wines, and I encourage everyone to check it out.”

The Okanagan Wine Festivals Society partnered with the BC Wine Institute and Okanagan College School of Business on the multi-year report, which was prepared by OWFS President Blair Baldwin, a business professor at the regional college and President of PinnAcle Consulting. A download of the report is available here via the school’s website.

The study cites more than 1,000 interviews and determined the average wine tourist to the Okanagan Valley spends $475 per trip. And the region’s wine industry accounts for more than 1,100 full-time jobs, according to the report.

Baldwin’s research breaks down the out-of-town tourist spending into: $97 for wine, $75 at on-premise restaurants, $142 on accommodations and $160 for transportation and other expenses. It found that more than 50 percent of Okanagan Valley wine tourists visit at least four wineries, while 25 percent will spend time at seven or more wineries during their visit. 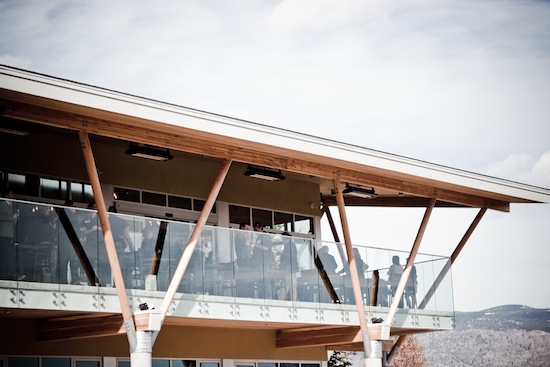 Miradoro Restaurant at Tinhorn Creek Winery in Oliver, British Columbia, will stage a Chef vs. Chef Dinner on Friday as part of the Okanagan Fall Wine Festival. (Photo courtesy of Miradoro)

A wine tourist living within the Thompson Okanagan spends an average of $120 per visit, according to Baldwin’s research, with the typical party size of two people.

However, the Okanagan Wine Festivals — include the Spring, Fall and Sun Peaks Winter events – tend to attract a “younger audience,” and nearly 70 percent of those wine tourists have a minimum education of of two years in college, according to the study.

“This study really validates the importance of wine tourism to our local economy and how the Wine Festivals and its 100-plus member wineries have been successful in engaging consumers in unique and authentically British Columbian wine experiences year round and directly yielding increases in the sale of wine, food and accommodation,” Baldwin said.

The Okanagan Fall Wine Festival, the largest event of its kind in North America, spans 150 events and 10 days, so its role in the economic study is significant in BC wine tourism. The Okanagan Valley is the cradle for British Columbia wine industry, which has grown to 217 wineries and 9,800 acres of vineyard.

Eric von Krosigk, winemaker at Summerhill Pyramid Winery in Kelowna and chairman of the OWFS said, “This study is welcome news and underscores the belief that wine tourism is a terrific economic driver. And what better time to announce these results than at the start of the 33rd Fall Okanagan Wine  Festival.”

Glenn Mandziuk, CEO of the Thompson Okanagan Tourism Association, said, “The wine sector has become a critical component of the tourism experience in the Thompson Okanagan region and as major advancements have been made in the industry we’re really seeing the Valley as world class in offering exceptional culinary and wine experiences at the cellar door.”

An estimated 800,000 wine tourists visit the province each year, and $4 million taxes are generated by those tourists, the report said. The gross domestic product attributed to wine tourism is $69 million, while the direct annual economic impact is $87 million and the indirect impact is $52 million.

Destinations focused on wineries in Kelowna, West Kelowna and Penticton, according to the report, which would seem to indicate opportunities for growth along the Golden Mile of Oliver and near the lake resort town of Osoyoos – just the border from Oroville, Wash.

Festivities for the Okanagan Fall Wine Festival kicks off Thursday in Kelowna with the annual BC Wine Awards Reception, which features top wines from the BC Wine Awards competition at the Manteo Resort. Events include intimate dinners at individual wineries and conclude Oct. 11-12 with the WestJet Wine Tastings, which sold out earlier than ever this year.

Harry McWatters, founder of Sumac Ridge Estate Winery in Summerland, is credited with creating the Okanagan Fall Wine Festival after attending the Tri-Cities Wine Festival in Richland, Wash., which began in 1979.

“The fall season, with its warm days and cool nights is an ideal time to visit the Okanagan with the grape harvest well underway and something for everyone from the wine enthusiast to the newbie,” von Krosigk said. “Our events range from large consumer tastings to intimate wine and food gatherings, but they all have one common theme – authenticity and interaction. You get to meet the characters behind the wine and experience wine country the way it’s meant to be enjoyed in a fun and social atmosphere.”