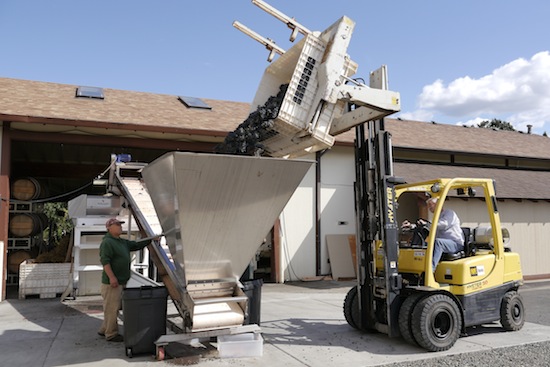 HOOD RIVER, Ore. — Tourists seek out experiences rather than ask to be educated, but Cathedral Ridge Winery owner Robb Bell is ready to give wine lovers a little of both each Saturday afternoon during October in Hood River, Ore.

He promotes it as The Complete Harvest Experience, and it begins at 1 p.m. today. Within 30 minutes, he’ll share with wine lovers a primer on what it’s like to make wine in the Columbia Gorge.

“There is a significant number of people who want education but who hate the ‘education’ word,” Bell said. “What they do want are experiences. They want a sensory exercise, some history, learn about a few vineyard practices and food pairings — simple hors d’oeuvres they can make in six steps that take less than 10 minutes to prepare and where you can get everything you need at Safeway.

“And they want you to teach them how to have a wine party,” he added. “Food is the intrinsic part.”

Bell has been a champion of the Gorge since he purchased the winery from Don Flerchinger in 2003.  He immediately hired Sonoma County winemaker Michael Sebastiani to consult. Four years later, Wine Press Northwest named Cathedral Ridge its Oregon Winery of the Year, in large part for his work with Bordeaux varieties, Syrah and proprietary reds.

“I wouldn’t have done this without him,” Bell said. “He’s a blending genius.” 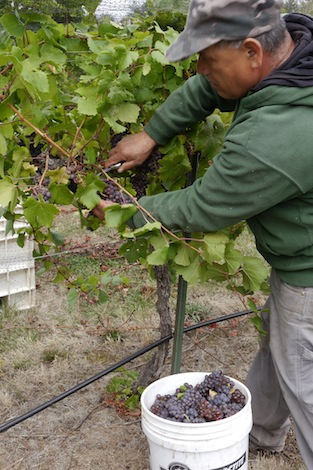 Cathedral Ridge Winery in Hood River, Ore., which harvests grapes from more than a dozen vineyards in the Columbia Gorge, offers its Complete Harvest Experience promotion for visitors each Saturday afternoon throughout the month of October. (Photo courtesy of Cathedral Ridge Winery)

Bell and Sebastiani now work with a toolbox at the Hood River winery that spans 14 vineyards. The plan is for Cathedral Ridge to produce 7,000 cases from the 2013 vintage and tap into many of the 26 varieties in the region.

“We’re so blessed in this area,” Bell said. “They are all great, which keeps the wine club jazzed. We’re working with kitchen garden in our backyard.”

Bell also continues to enjoy a close relationship with viticulturalist Lonnie Wright, whose work with vineyards in the Northwest began 35 years ago with the first plantings at what is now Columbia Crest.

“Lonnie helps us consolidate, and nobody screws with him,” Bell said. “I get some fruit as far as Echo, but 95 percent of it comes from between here and The Dalles.”

Recently, Bell opened a satellite tasting room in Dundee, just a couple of blocks southwest of Tina’s Restaurant. And slowly, Columbia Gorge wineries — an hour’s drive east of Portland on Interstate 84 — continue to recover from the recession of 2008, Bell said.

“Traffic is off, but people are spending more than ever before,” he said. “We’ve had a recent explosion of wineries, which seems to happen every three or four years.”

The Complete Harvest Experience is new to Cathedral Ridge and akin to “show and tell,” Bell said. Cost is $25 per person or $30 per couple. It will be staged all four Saturday afternoons in October.

“We will take 15 minutes to walk them through the process, show them the stemmer/crusher, how to measure sugar, and then it will evolve into a tasting where we show them the difference between reserve and regular bottlings,” Bell said.

The look inside the winery and the winemaking process includes a tasting of six select wines with food-and-wine pairings, wine club member discounts for the day and a complimentary glass of wine along with notes and recipes from that day.

“I’ve looked at other efforts, including a couple of in California, and I’ve learned it’s important to know what you’re talking about but don’t oversell yourself,” Bell said. “Too often they last forever. They need to be short and sweet and to the point.”

“People are dying for education,” Bell said. “If you give them that, they’ll never forget you because you’ve helped them. It’s very powerful stuff, and it’s consistent with what we’re all trying to do here in the Gorge.”

An hour’s drive upstream alongside the Columbia River, Maryhill Winery in Goldendale, Wash., will stage its Harvest Celebration Weekends on Oct. 12-13 and 19-20, which include live music on its terrace.